Indian university warns against screening of BBC documentary on Modi 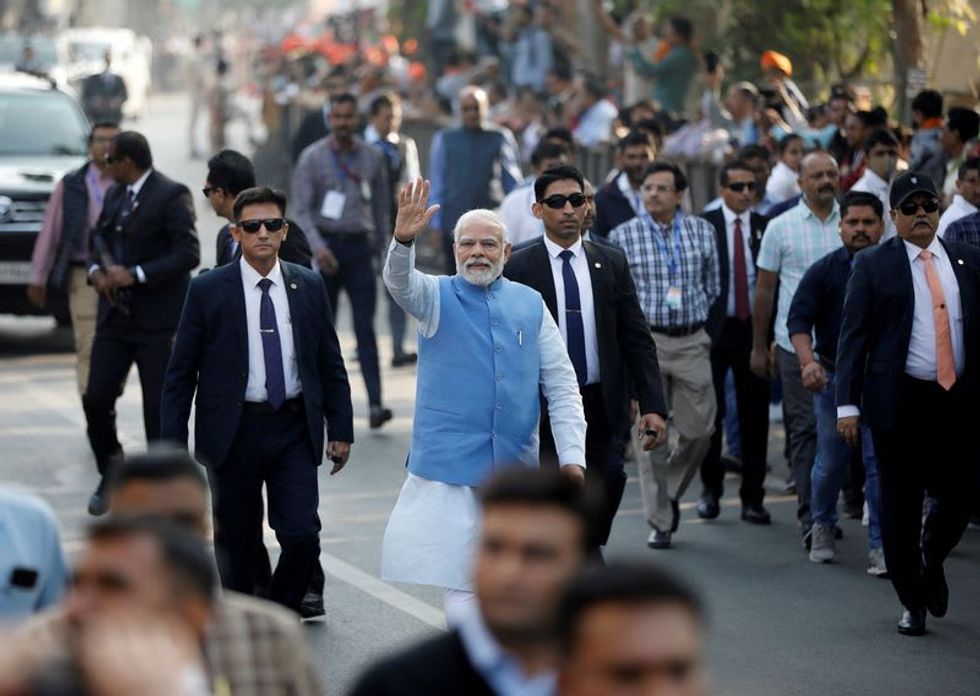 NEW DELHI (Reuters) - A top Indian university has warned its students' union of strict disciplinary action if it goes ahead with a planned screening of a BBC documentary on Prime Minister Narendra Modi on Tuesday, saying it might disturb peace and harmony of the campus.

Modi's government has dismissed the documentary, which questioned his leadership during deadly riots in his home state of Gujarat in 2002, as "propaganda", blocked its airing and also barred sharing of any clips via social media in the country.

Modi was chief minister of Gujarat during the violence in which more than 2,000 people were killed, most of them Muslims.

The students' union of New Delhi's Jawaharlal Nehru University, long seen as a bastion of left-wing politics, said on Twitter it would screen the documentary, "India: The Modi Question", at a cafeteria at 9 p.m. (1530 GMT).

The university administration said on its website it had not given permission for the documentary to be shown.

"The concerned students/individuals are firmly advised to cancel the proposed programme immediately failing which a strict disciplinary action may be initiated as per the university rules."

President of the union, Aishe Ghosh, asked students on Twitter to the screening of a documentary that has been "'banned' by an 'elected government' of the largest 'democracy'".

The High Court of Gujarat in 2017 jailed 11 men for life for setting the train on fire.

Modi has denied accusations that he did not do enough to stop the riots and was exonerated in 2012 following an inquiry overseen by the Supreme Court. Another petition questioning his exoneration was dismissed last year.

The BBC said last week that the documentary was "rigorously researched" and involved a "wide range" of voices and opinions, including responses from people in Modi's Hindu nationalist Bharatiya Janata Party.

The documentary is also scheduled to be screened at various campuses in the southern state of Kerala on Tuesday.

(Reporting by Sudipto Ganguly in Mumbai; editing by Robert Birsel)

Jessica Corbett, Common Dreams
The family of Tyre Nichols and others appalled by his death—for which five fired Memphis cops now face murder charges—welcomed the police department's decision on Saturday to disband a unit created in 2021 to patrol high-crime areas.

The MPD's Street Crimes Operation to Restore Peace in Our Neighborhoods (SCORPION) Unit hasn't been active since Nichols' January 10 death, according to the mayor. The five ex-officers, who are all Black, were part of the unit and on assignment with it when they pulled over Nichols, police spokesperson Maj. Karen Rudolph confirmed to multiple news outlets on Saturday.

‘The Rock’ residents once lived off the land. They blame a burn pit for turning it toxic.

The Hoskins family, residents of a community outside Colfax known as The Rock, wonder how long they had been eating the eggs of the cancerous birds they raised outside their home. It haunts them.

It’s one of the nightmares they and others in The Rock say they have endured from exposure to the toxins released from a hazardous waste facility less than 2 miles away. Its operating permit is up for renewal, and they pray it will be denied.

“It’s gotten too horrible,” said Susan Hoskins, a lifelong resident of The Rock.

Hoskins’ family has lived in The Rock for six generations. Her daughter, Sliska Larry, raised her own kids there and now her grandkids – ages 3, 4 and 9 – live there.

I would like to live to see my great grandchildren breathe clean air.

– Susan Hoskins, resident of The Rock

Larry told the Illuminator how it was before the chickens died, when her extended family from throughout Central Louisiana would come to The Rock.

“When we’d get together, it was a glorious time. There’s gonna be some food cooking, card playing, dominoes,” Larry said. “If we got something extra, we’d share. If they killed a hog, everybody in the neighborhood gonna have some meat.”

The family would play zydeco music and downhome blues, and cook meals with their homegrown greens, bell peppers and corn. But no longer.

“We can’t do that now because you can’t be outside,” Larry said.

The Rock’s residents say they can’t fish in nearby waters, picnic outside or laze with their children on the lawn watching the clouds roll by. Swing sets are idle, old folks no longer play cards outside or listen to the evening birdsong while sitting on their porches.

Signs are displayed in the window of a home in The Rock community in opposition to the renewal of a state permit for the Clean Harbors Colfax hazardous waste disposal facility. The open burn pit is less than 2 miles from The Rock. (Photo by Remi Tallo)

Garden beds, once bursting with purple peas, okra, tomatoes, potatoes, watermelons, cantaloupes and cucumbers, are overrun with weeds. The Hoskins’ once bustling chicken coop now houses the family dog. The family relied on their fresh vegetables, fruits, chickens and eggs for everyday sustenance. Now they survive by sharing what they can afford to purchase or donations from area food pantries.

“If one don’t have, we call each other, and then we try to make enough so everybody can eat,” Larry said.

“We relied on our gardens for our basics,” Clay said. “What we could grow in our garden was our free meals. Now we go into the grocery stores and you see the mustard greens, maybe two for $3, and we have to pay for it. Eggs is sky high!”

“Most of the people here are retired, living on Social Security,” Larry said. “A lot of them don’t get food stamps. You gotta pay your bills and buy your food with your money. So what do you do? How are you living?”

None of the staples of rural Louisiana living are safe, according to neighbors of Clean Harbors Colfax, a facility that disposes old munitions from Camp Minden and expired fireworks from Disney World. Thick pillars of black smoke from the open burn pit are visible from backyards in The Rock.

Clean Harbors opened the open-burn disposal site in 2002 and expanded it in 2015. The Massachusetts company is asking the Louisiana Department of Environmental Quality (LDEQ) to add a closed-burn structure when it renews its operations permit.

Residents of The Rock attribute their various ailments to the facility. A Rapides Parish pathologist has said the lungs of residents there are less healthy than in surrounding parishes.

Clean Harbors has not responded to questions from the Illuminator about neighbors’ health concerns.

Deborah Clay, left, and Brenda Redmond live in The Rock, where residents say report health problems they believe are linked to the Clean Harbors Colfax hazardous waste facility less than 2 miles from their homes. (Photo by Remi Tallo)

Deborah Clay, who lives in one of seven homes that comprise The Rock, has lost almost all of her hair. She’s lived in the community off Louisiana Highway 71 for more than four decades.

“I used to have beautiful shining hair,” Clay said. “I have memories where sometimes I just sit back and cry about things. I know what I used to look like compared to what I look like now.”

Ray Boutte, who helped tend the Hoskins’ chickens, has chronic obstructive pulmonary disease. Angie Sanders, a relative who often visits from nearby Colfax, has chronic sinus allergies. It’s rare for her not to clutch a tissue.

“I know they don’t want me blowing my nose and trying to play cards,” Sanders said. “My nose is always running. I cough, my throat hurts.”

Larry witnessed her sister-in-law’s last breath in Hoskins’ living room, where the family was tending her as she neared death. Rhonda Wells had lived in Colfax for 30 years when she fell victim to cancer.

“It’s a hard feeling to watch somebody that you love, that you grew up with all your life, that’s only 52 years old, aspirate that last time. She was fighting to live,” Larry said.

“I have a two-story house up here. When they bomb, my house shakes,” Redmond said. I lost two windows from the right side of the house. I can’t even pull the window [open].”

She drinks bottled water in fear of contamination.

“When I take a bath, I say, ‘Well, Lord …’” Redmond said. “People say I talk about the Lord all the time, but if you’re not holding on to your Holy Spirit, this situation with Clean Harbors is gonna break you down.”

Parents in The Rock say they fear for their children’s health. Larry says all three of her grandkids have persistent sore throats, runny noses and coughing.

“In Colfax, all [doctors] know is allergies. They give you the [antihistamines], they give you the little pink medicine, amoxicillin. But guess what? Two weeks later, the baby is still sick,” she said. “We’re going back and forth to the doctor, and then after a while they start calling Child Protection Service on you because they figure you’re not taking care of your child.”

An excavator clears out earth covering a broken water line that residents of The Rock community blame on the detonation of hazardous materials at the Clean Harbor Colfax disposal facility. (Photo by Remi Tallo)

Sanders said it’s been a challenge to organize the community to oppose the Clean Harbors permit renewal “because they fear their voices won’t be heard.” But now that the community is at risk of food insecurity, she wonders what it will take to get the right kind of attention to their plight.

“Does it take for 20 people to die at one time, then maybe you’ll step in when you could have did something before that happens?” Sanders asked in a question rhetorically directed at LDEQ. “Y’all turning a blind eye.”

Sliska said the state’s enforcement against Clean Harbors has been a joke. “The more you fine them, the more they burn,” she said.

The Hoskins family is inviting Gov. John Bel Edwards to sit at the table with them and have a piece of king cake. With the recent loss of his mother, they hope the governor will consider all the illness and death they’ve experienced in the past 20 years.

Defying the guidance of the nation's leading medical organizations, Republican Utah Gov. Spencer Cox on Saturday signed into law a bill banning gender-affirming care for minors in the state.

Passed by the Utah House of Representatives on Thursday and the state Senate on Friday, S.B. 16 prohibits gender-affirming surgeries for trans youth and bars hormonal treatment for new patients who were not diagnosed with gender dysphoria before the bill's effective date, May 3.