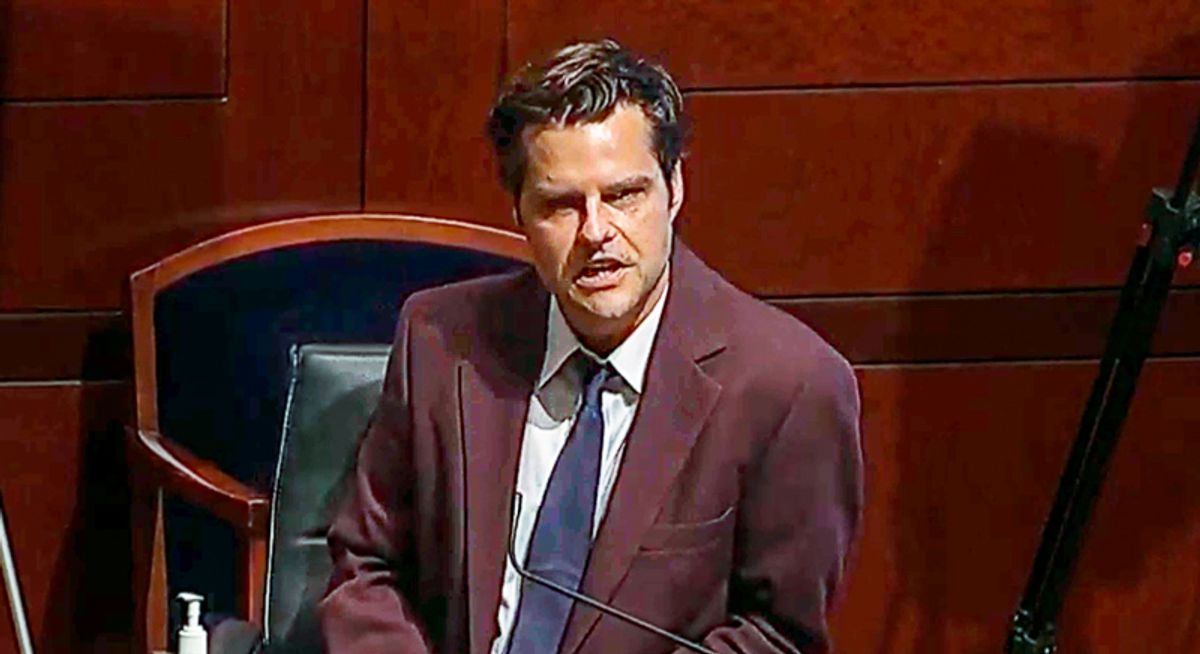 Ever since the storming of the Capitol on January 6th — incited by the then-president Donald Trump and taken up by extremist groups he emboldened on the right — we've seen the GOP and its enablers try to blame Democrats and the much-mythologized "radical left" for what happened. They've also continually attempted to blame Democrats for right-wing violence that may occur in the future.

It began with the lame, debunked and unsuccessful attempt by GOP Trump loyalists like Rep. Matt Gaetz of Florida to blame "Antifa" for the attack on the Capitol, even while it was unfolding. Others, particularly at Fox News, at the same time were incongruously pushing the idea that America had it coming for Democrats supposedly mistreating Trump.

Then it moved into House Republicans saying Trump shouldn't be impeached because it will only further anger his supporters and cause more violence when we now needed "unity" and "healing." (Of course, implicit in this claim was that the Trump base can't control itself from being violent, but the GOP House members papered over that.)

Now comes a truly demented insinuation that, because the Capitol wasn't adequately protected and law enforcement was unprepared, House Speaker Nancy Pelosi somehow may have known what was going to happen and allowed it go on. It makes little sense but Ron Johnson, the delusional conspiracy-mongering Wisconsin Republican senator, questioned what Pelosi "knew" beforehand about the attack while being interviewed by Fox News propagandist Maria Bartiromo on Sunday.

Johnson's comments came in the context of a discussion with Bartiomo about a letter CNN obtained that the former chief of the Capitol Police, Stephen Sund, wrote to Pelosi and the ranking members of both parties in the House and Senate. The letter was sent on February 1, focusing on the the government's failure in stopping the violent mob, and clearly lays the blame with federal and other agencies — which at that time were mostly run by the Trump administration.

Sund's account alleges a failure of the FBI, US Secret Service, Department of Homeland Security and the DC Metropolitan Police Department to anticipate violence on that day, and said it was reasonable to rely on that intelligence since earlier pro-Trump rallies had been similarly assessed and were not violent.
"The entire intelligence community seems to have missed this," he wrote.

Sund also is scathing in the letter toward the Defense Department:

"I still cannot fathom why in the midst of an armed insurrection, which was broadcast worldwide on television, it took the Department of Defense over three hours to approve an urgent request for National Guard support," Sund wrote.

How Ron Johnson deduces that any of this means Pelosi "knew" anything is completely indecipherable — because it simply can't be deduced.

He appears to be using the fact that Pelosi was sent the letter about Trump administration failures — on February 1, along with other Congressional leaders — to try to imply Pelosi had some kind of prior knowledge, hoping he can blur the timeline as it's reported out in the media. It's wacky, and it's a spectacular lie, but appears to be a recitation of new GOP talking points.

As Bartiromo shifts from the letter to the impeachment trial, Johnson attempts to connect the two:

"What's this impeachment all about? We now know that 45 Republican Senators believe it's unconstitutional. Is this another diversion operation? Is this meant to deflect potentially away from what the Speaker knew and when she knew it? I don't know, but I'm suspicious."

Again, there is nothing in Sund's letter even remotely implying Pelosi knew anything about the impending attack. It's a letter addressed to Pelosi and other Congressional leaders almost a month after the attack, explaining how federal intelligence and law enforcement agencies and U.S. military leaders under the Trump administration failed. The letter is damning not to Pelosi or Democrats, but to Trump.

Evidence that these are bizarro talking points the GOP is circulating ahead of Trump's impeachment trial this week came a few minutes later on the same program, when Mark Meadows, Trump's former chief of staff, pushed the same insane line.

Meadows said when it came to protecting the Capitol there were bad decisions that were made and they didn't come from the White House but from the "other end of Pennsylvania Avenue."

Like Johnson, Meadows offers no specifics, just a vague accusation that Congress is responsible for the attack by not reinforcing security. It's an outrageous insinuation because the House and the Senate — which was actually controlled by the GOP on January 6th — are not in charge of the operation of the Capitol Police, nor any other law enforcement agency. Meadows is floating false claims that go back several weeks which were made by Facebook users and other on social media and which the Associated Press had fact-checked and debunked, exposing how right-wing trolls were planting disinformation.

All of this seems to be an attempt to demonize Democrats as the impeachment trial gets underway, claiming Democrats are trying to deflect from their own supposed wrong-doing. Increasingly unhinged Senator Rand Paul of Kentucky even said — on Fox News of course — that if we're going to impeach and convict Trump for his "speech" then we should be impeaching Senate Majority Leader Chuck Schumer for his "violent rhetoric" about right-wing Supreme Court justices Neal Gorsuch and Brett Kavanaugh during their confirmation hearings.

Again, idiotic diversions not based in logic. The argument by conservatives that Trump was just expressing his "free speech" by falsely claiming there was massive election fraud and ginning up anger among his supporters completely ignores the fact that this is not a trial in a court of law, nor is Trump a private citizen. This is an impeachment trial of a man who was president, for whom high crimes and misdemeanors are determined by Congress. And the House, in a bipartisan vote, determined that inciting an insurrection against the government falls within that category.

Comparing Trump's actions to a senator criticizing a Supreme Court nominee, even harshly, is ridiculous, and Paul and the rest of them know it. But the GOP is devoid of a defense for its actions — for sticking with a one-term, twice impeached loser, because they're afraid of him or just plain agree with his anti-democratic, authoritarian impulses — so is is moving to increasingly desperate arguments.

Senate Republicans are also restating the arguments of House Trump defenders, claiming that moving forward with the trial will only hamper "unity" and bring further violence, setting up Democrats for blame when future attacks happen.

But trying to blame the insurrection and the attack on the Capitol on Pelosi and Democrats — and laying the groundwork to blame them for future attack by right-wing, white supremacist and QAnon extremists — is an insult to all who were attacked in the Capitol siege, including Capitol Police officer Brian Sicknick, who was killed. And it is an affront to the American people.

We can't let them get away with that.