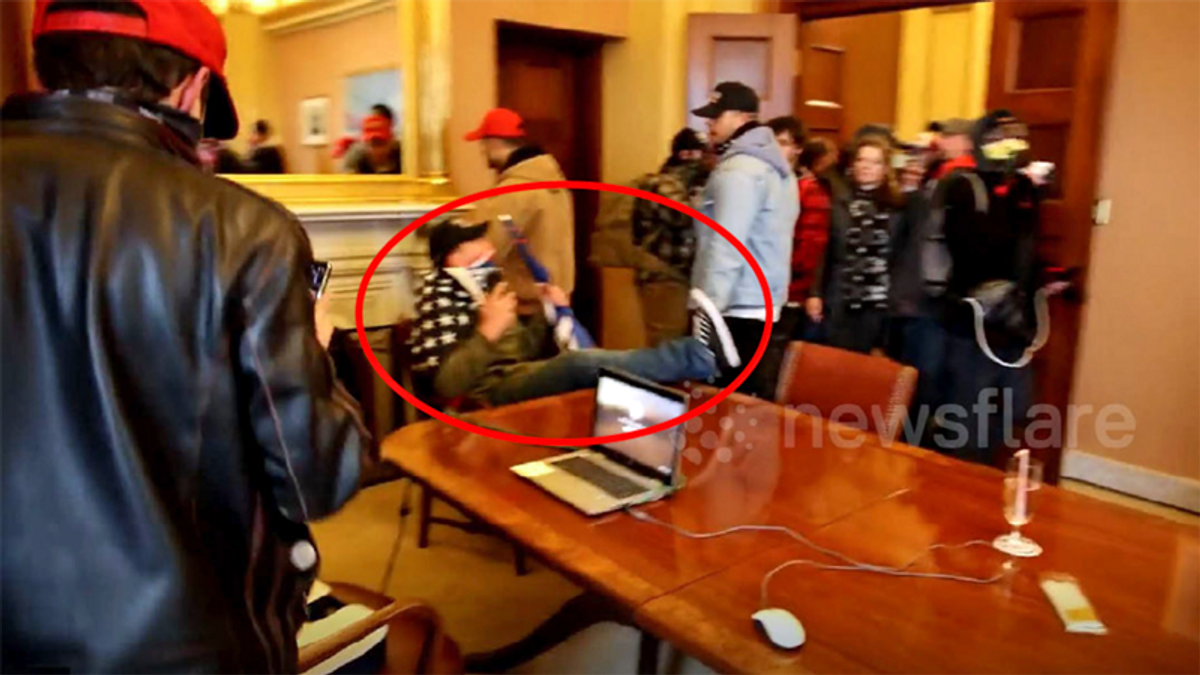 The FBI arrest complaint states that Palm admitted to agents that he entered the Capitol building -- he claimed "the police made a gap and allowed the crowd and Palm to enter the building" -- but his case was otherwise out of the ordinary. For one thing, according to the FBI, he provided a flash drive of videos he had taken off his cellphone.

In one video, the report says, Palm can be heard shouting "Stop the Steal!" In another, "the camera shakes as seen in the surveillance footage as if Palm is joining chants of "Whose house? Our house!"

"In another video Palm recorded, he and others walk through a hallway inside the Capitol, while some in the crowd call out for "Nancy," in an apparent reference to Speaker of the U.S. House of Representatives Nancy Pelosi. One individual shouts "Where are you?" and another can be heard stating "We're gonna kill her." Palm and the crowd approach a closed door marked "OFFICE OF THE SPEAKER.

"'In the video, other rioters open the door and someone shouts 'Come on you c*** Pelosi, get the fuck outta here.' Palm then enters the Speaker's Conference Room and can be heard asking, 'You guys want a tour?' Palm then walks around the conference room and records the screen of an open laptop sitting on a conference table.

The report also added this:

"Finally, Palm sits down at the head of the conference table, puts his feet up on the table and can be heard saying 'I think I like my new dining room. I pay for it!'"

In other videos, Palm can be seen standing on a Capitol terrace overlooking the East Mall and shouting down to fellow rioters, "Look out for the tear gas," according to the report.

In one other uncommon twist, Palm was reported to have "brought the clothes he was wearing on January 6, 2021, to the interview: a gray Levi- Strauss-branded hooded sweatshirt, with light blue jeans, a black hat with a white American flag with a blue stripe in the middle, and a blue and red flag with white stars and the words "TRUMP" and "Keep America Great."

Palm, whose address wasn't given but who has been ordered to report to a probation office in Colorado Spring, CO, was apprehended by the FBI on a tip from a family member.

You can read the full FBI report here.