Economic growth and globalization have connected the world’s most distant places. Rapid trade and transport have boosted economic growth globally, but not without consequences: many species have been introduced to new regions, far from where they evolved.

In recent decades, alien herpetofauna — amphibians and reptiles — have increasingly gained attention on social media, with more information being circulated about the impacts these species have on native flora and fauna.

And yet, the number of invasive reptiles and amphibians is increasing, facilitated by the persistently high globalization of human activities.

Some invasive species arrive unintentionally as hitchhikers on planes, ships and cars. Others are sold intentionally as exotic pets, which then escape or are released into the wild. Of those that survive and establish, some are able to spread with severe negative impacts, giving them the title of “invasive.”

These impacts can be massive. Alien species are a leading cause of biodiversity loss and extinction worldwide, affecting human welfare and quality of life.

While alien species can also have detrimental effects on the economy, this is often complex to assess. Available information is often scattered, covers different scales or periods, recorded using variable measurements and currencies and presented in many languages.

The InvaCost database, the most comprehensive database of the cost of alien species and a global initiative of scientists, gathers this information and makes it accessible to researchers and the public. 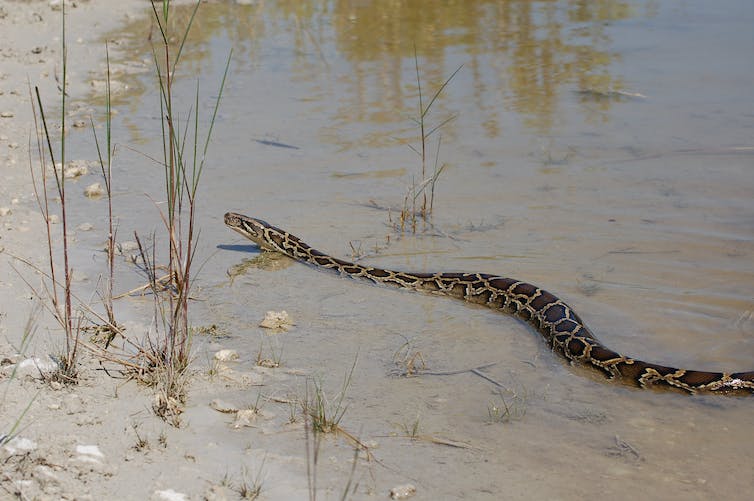 The alien Burmese python has successfully established itself in the Everglades National Park in Florida, where it has decimated local mammal populations.

The most common pathway for invasive reptiles and amphibians is the often-illegal trade of exotic snakes and frogs as pets.

Another common pathway is release for biological control, where a new species is introduced in an attempt to control a pest species. This is how the cane toad was introduced in Australia.

Other pathways include aquaculture enterprises, such as those that raise American bullfrogs for human consumption and species hitchhiking on planes or boats.

Alien reptiles and amphibians can have quite unusual and surprising economic impacts. For instance, after the arrival of the coquí frog to Hawaii via contaminated nursery plants, its very loud mating song caused severe declines in property values in infested areas.

More typical economic impacts stem from programs for the control or eradication of these species. Management programs are needed due to the damage these invaders cause on biodiversity by eliminating native species, including at-risk amphibians and reptiles. 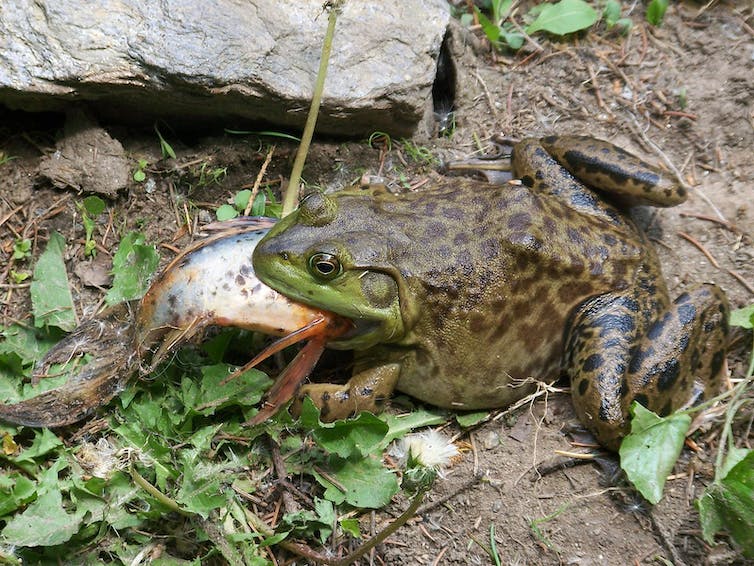 American bullfrogs have the largest reported economic impacts of any amphibian.

This is the case for one of the most famous snakes in the pet trade, the California kingsnake, for which numerous eradication programs on the Canary Islands exist.

Further, the bulk of these costs was from a small subset of highly impactful species. Most notably, the brown tree snake alone has resulted in a loss of US$4.5 million per year in Guam due to island-wide power outages and costing a total of US$10.34 billion during the study period (1986-2019).

The runner-up in terms of total impacts was the American bullfrog, whose impacts of US$6.04 billion accounted for approximately 97 per cent of the total amphibian cost, mostly due to control and eradication measures in Europe.

The types of costs incurred varied across species. In the case of amphibians, costs mostly originated from government expenditures — US$6.25 billion, or 99.6 per cent. These costs are derived from mitigating the spread or impacts of invaders through prevention, control, research, long-term management or eradication.

Reptile costs, however, mostly affected the public and social welfare sector, reportedly causing staggering damages — US$10.02 billion, or 96.6 per cent. These costs are incurred directly due to the impact of invaders, such as yield loss, infrastructure damage or income reduction.

Geographically, we found that economic impacts were present across all continents, except for amphibians in Africa, likely due to the lack of information. The geographic regions most affected were Europe by amphibians (US$6.04 billion), and Oceania and the Pacific Islands by reptiles (US$10.35 billion, 99.61 per cent).

Prevention is the better solution

The economic costs of herpetofauna invasions are massive across all continents, but also underestimated. The vast part of our estimated total cost originated from only two species: the brown tree snake and the American bullfrog, which is likely, at least in part, due to missing data.

It should nevertheless be acknowledged that not all invasive reptiles and amphibians will have tangible monetary impacts, so some gaps are expected. Nonetheless, a greater research effort is needed to distinguish the true absence of economic cost from gaps in cost detection — especially for those species known to cause detrimental ecological impacts.

And as shown, investments in preventive measures can be an important money-saving measure for the public over the long term, compared to reactive control approaches once a species has successfully invaded.

We propose the compilation of national lists for species facing import and selling bans, better screening for potentially harmful species and a more comprehensive effort to obtain information on the actual and species-specific costs. Our research highlights the importance of these measures to prevent future immense economic costs.