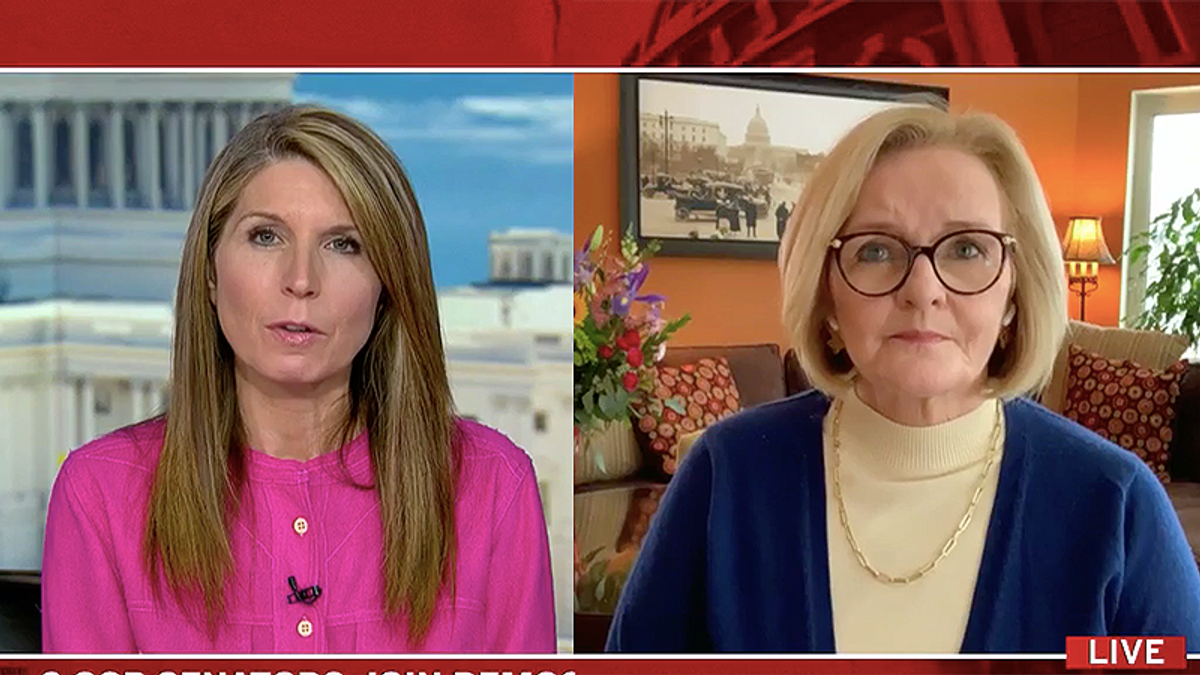 Speaking after the vote on whether to proceed, host Brian Williams began the discussion by quoting a tweet from former Clinton White House adviser Paul Begala, "Trump is apparently being represented by the law firm of Meandering & Furious."

Trump is apparently being represented by the law firm of Meandering & Furious.
— Paul Begala (@Paul Begala)1612904287.0

But it was Nicolle Wallace and former Sen. Claire McCaskill (D-MO) who asserted that the layers of irony were so considerable that it would topple a cake.

"It is really ironic in so many ways," said McCaskill. "Mitch McConnell's vote particularly, as it relates to this procedural question, because the only reason this trial did not occur while the president was still in office, Mitch McConnell. That's it. I mean, he was impeached when he was in office. The trial could have occurred immediately. They were ready. They wanted to do the trial immediately, and Mitch McConnell said, 'No.' So, here he is voting because he caused this to happen."

She noted that Trump's lawyers didn't even address that there have been historic precedents for holding someone accountable after they've left office.

"Or the big elephant in the room, that is, he was impeached while in office and the trial was purposely delayed for partisan reasons," she continued. "So, these senators would have an excuse. I mean, he about wanted to rage on about partisanship. The whole reason this was delayed was partisanship so it really is unfortunate that many senators went along with the fig leaf, but now we get to the meat of the matter tomorrow, and it will be, I think, become even harder and harder for them to look at themselves in the mirror and feel proud of the position they've taken."

"The other elephant in the room was the Trump lawyer invoking the word disenfranchisement. Donald Trump sought to disenfranchise voters, he sought to do it on a telephone call, it's part of what he was impeached for by Democrats and Republicans. This was so Trumpian in its projection." Wallace said.

"Yeah, the irony has so many layers, the cake you referred to earlier with three layers," McCaskill said. "This cake would be so tall, it would topple over. The layers of irony. The only reason that we are here is because the president wanted to disenfranchise the voters of this country. By, in fact, lying about the election itself. So, this is -- this is really -- I mean, I could go on and on about all of the ironic arguments that were made, particularly by the second lawyer, because the first lawyer, I mean, I don't think his phone's going to be ringing, I got to tell you the truth."