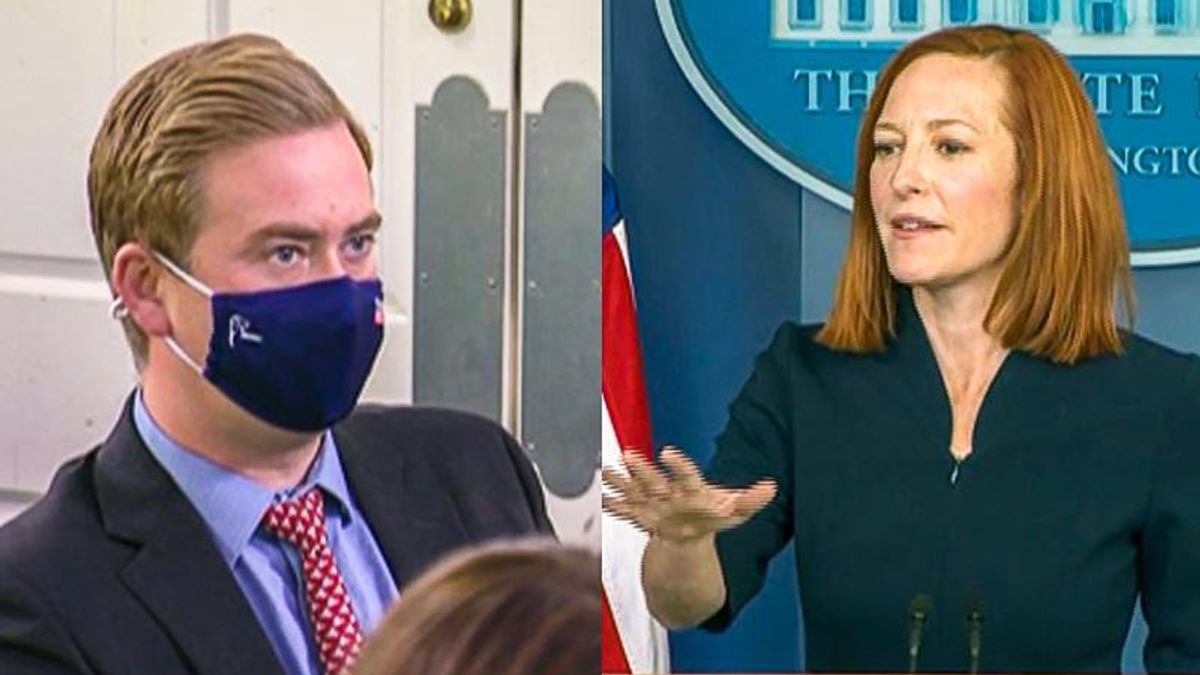 It took a full 6 minutes on Wednesday for White House Press Secretary Jen Psaki to explain to Fox News correspondent Peter Doocy why the Biden administration is housing migrant children who enter the U.S. without a parent or guardian.

"You've been telling migrants from right there for a month now -- all the way back to Feb. 10 -- that now is not the time to come," Doocy said. "But they are coming in bigger numbers every day so do you have a messaging problem?"

"I would say that in the last administration we had a morality problem," Psaki observed, "and children were being pulled from the arms of their parents and kids were being sent back on a treacherous journey and that's not the approach of this administration."

"Certainly that means that more kids will be cross the border," she continued. "We made a policy decision that that was the right humane step to take. But I think it's also important for people to understand that the vast majority of the people that come to our border are turned away."

Doocy interrupted to point out that there "are migrants showing up wearing T-shirts that say, 'Biden, please let us in.'"

"Why doesn't he come out and just say now is not the time?" the Fox News correspondent wondered.

"He actually did an interview with Univision about a week or a week and a half ago where he conveyed a similar message," Psaki noted. "And we've conveyed that at every opportunity that we have."

"We are digging our way out of a broken and dismantled system," she added before outlining the steps the Biden administration has been forced to take due to the prior administration's policies.

Doocy then changed the subject to ask why more schools are not opening at full capacity.

"Is there a school in particular that you have as an example?" Psaki challenged.

"Are most of the schools in this country at full capacity with in-person learning?" Doocy pushed back.

"Is there a specific school though that is not following the CDC guidelines of implementing the mitigation steps so that they can reopen?" Psaki asked again.

"The CDC said that every school can be at full capacity," Doocy claimed.

Psaki explained that the CDC has provided schools with eights steps that they should take before reopening.

Doocy then wanted to know if "the HHS and Border Patrol unions [have] been easier to work with than the teachers unions."

"I think that is a little bit of mixing different circumstances," Psaki said.

"It's children all in tight quarters," Doocy insisted.

"Not quite," she remarked. "Let's take a responsible approach to the two issues."