The mother of the 15-year-old charged with killing four students and injuring seven other people during a school shooting in Michigan sent a text message shortly after the shooting assuming her son, Ethan Crumbley, was the shooter, according to testimony from her boss.

"Dramatic and disturbing testimony today as James and Jennifer Crumbley, the parents of a Michigan school shooting suspect, appeared in court," CNN's Ana Cabrera reported. "Each parent is facing four counts of involuntary manslaughter in the deaths of four students killed during last November's rampage at Oxford High School."

CNN's Jean Casarez reported on the testimony of Andrew Smith, who was Jennifer Crumbley's supervisor at work.

He reportedly testified that on the day of the shooting, she messaged him that she had to go meet with a school counselor, but then returned to work. A short time later, he heard her scream in the hallway after she learned of the school shooting.

"The gun is gone and so are the bullets," she texted him. "Ethan did it." 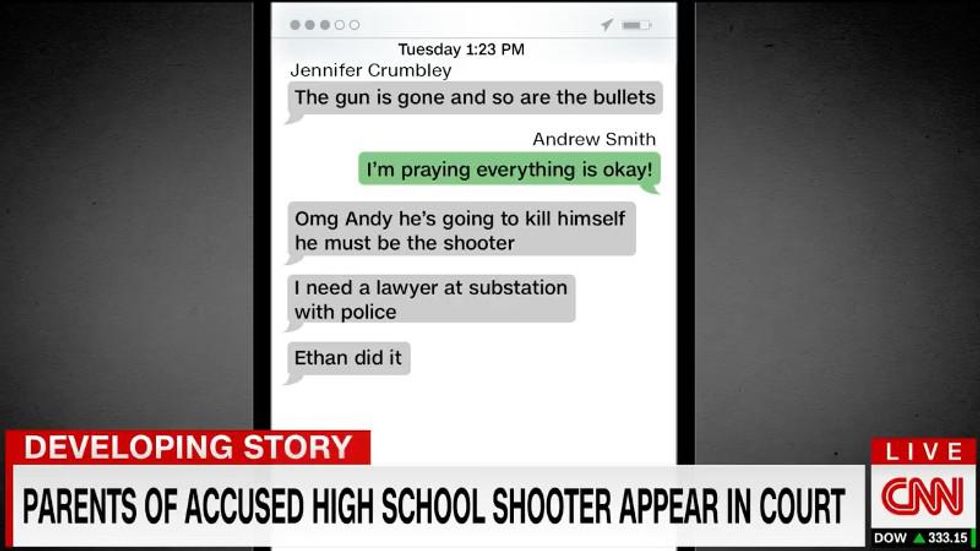 IN OTHER NEWS: 'God help them': Former McConnell adviser warns RNC making 'a huge mistake' by denying the reality of Jan. 6