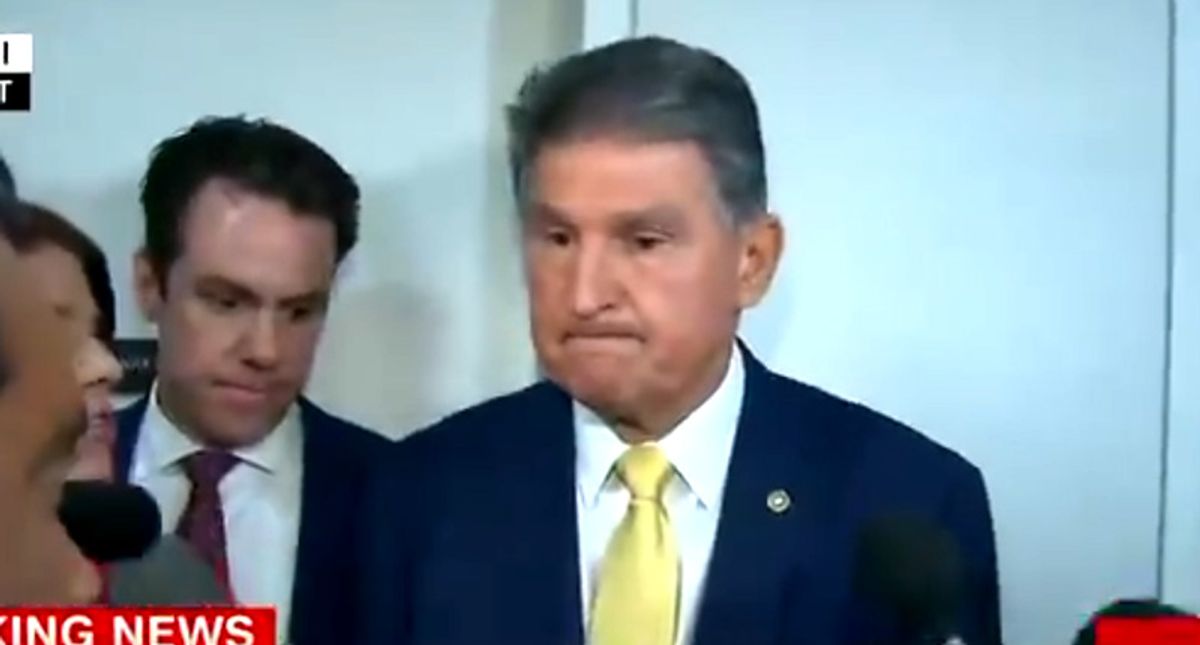 In interviews with MSNBC and CNN on Monday, West Virginia Gov. Jim Justice, a Republican, begged for help for his state as the COVID-19 crisis raged.

West Virginia has been one of the hardest-hit states in the country when it comes to the economic impact of the crisis. The state desperately needs the additional COVID stimulus funds that President Joe Biden is asking Congress to support, but the state's Democratic senator is refusing to agree to it.

"Absolutely not. No," he told The Washington Post, when asked about the Biden stimulus. "Getting people vaccinated, that's job No. 1."

Manchin even went on the attack against Vice President Kamala Harris for speaking on a local West Virginia news station pitching the COVID stimulus there.

"I couldn't believe it. No one called me. We're gonna try to find a bipartisan pathway forward. I think we need to. But we need to work together. That's not a way of working together, what was done," he said.

But it seems it's Manchin that is out of touch with the needs of his state. Gov. Justice told CNN how dire the situtation was: "If we throw away some money right now, so what!? People really, really hurting. We've got to move!"

During the White House press briefing Monday, reporters asked what preparation went into Harris' interview with the West Virginia station. Press secretary Jen Psaki wasn't sure what the reporter was getting at. She said that Harris and the White House are pushing the COVID package everywhere to advocate for passage.

Another reporter asked if no Republican voted to support the COVID bill if it would still be considered bipartisan since so many Republican voters also want to see it passed. Psaki agreed, noting that 74 percent of the American public wants the additional stimulus that Manchin and the GOP are blocking. With support from Justice, however, the White House has the bipartisanship they need.

Justice told MSNBC how hard it has been to get his people vaccinated. So far just 3 percent of the state has been vaccinated.

"It's a crying shame," the governor said. "We should absolutely -- we're the third oldest and we're first in chronic illnesses in West Virginia. But for God's sake, if we had the vaccines, we could be saving a lot of American lives today but we need the vaccines. We don't need them on shelves. If we have 49 million vaccines out in the nation and 27 in arms, I mean for crying out loud, we've got to have vaccines in West Virginia to get in people's arms right now."

"I absolutely believe we need to go big," he said.

It ultimately puts Manchin in the middle of being attacked from the right and the left for refusing to support the stimulus.

See the clips of Justice's interviews below:

**Republican** Governor of West Virginia @WVGovernor to me on Stimulus: “Trying to be per se fiscally responsible a… https://t.co/CZXM1YqQdo
— Poppy Harlow (@Poppy Harlow)1612195101.0