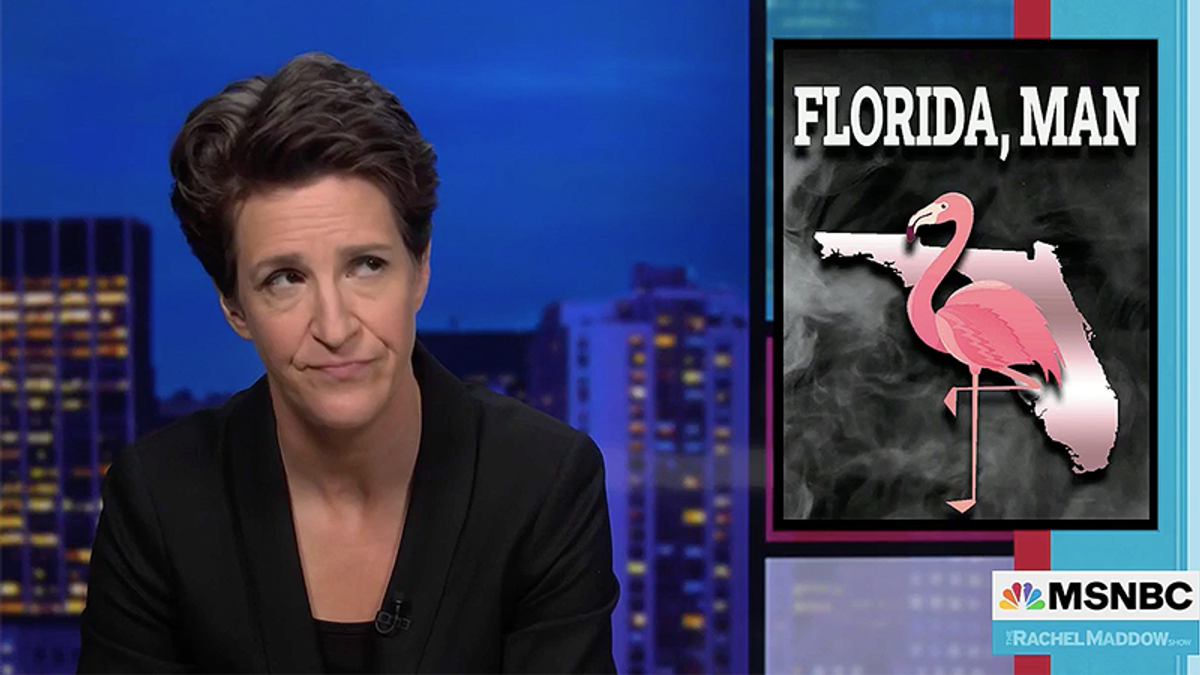 MSNBC host Rachel Maddow said that she scrapped her Tuesday show to walk viewers through the bonkers scandal that led to the allegations about Rep. Matt Gaetz (R-FL) being involved in a sexual relationship with an underage teen.

As far as it is understood now, it began with Josh Greenberg, a Seminole County Tax Collector who ousted a long-term incumbent tax collector in the county in 2016.

According to reports, Greenberg hired six people that were part of his wedding party in 2015.

By June 2017, after he'd been in office for several months, Greenberg said that all tax collector staff would begin carrying guns.

"He wanted them to wear their guns at work," Maddow explained. "To go along with their tax collector's office badges. This is like the office that collects license fees and stuff. This is not like some SWAT team agency with frontline Wyatt Earps out there defending the streets. But the guy elected to that office after hiring his groomsmen to come in and run the place buys all these guns and body armor and ammo and drones, tells everybody in the office they need to wear guns at work to go along with their badges? Why did he want that?"

At one point, he pulled someone over, claiming she was speeding, an odd claim given his office doesn't deal with anything involving traffic violations.

When someone filed to run against Greenberg, he arranged for someone to make a fake rape accusation. A collection of Proud Boys in the area then promoted the conspiracy all over the internet.

Then there was his relationship with Gaetz.

So, "federal agents show up at his house last summer to arrest him on the stalking charges, and things get worse because what do they find when they come to arrest him at his house? I will read it from The Orlando Sentinel. 'The day he was indicted for stalking a little rival, Joel Greenberg had several stolen IDs in his work vehicle, a pair of fake I.Ds in his wallet, and materials for making more in his office. Evidence he was regularly abusing his position to steal unwitting constituents' identities, according to federal authorities. Inside the tax collector's work vehicle, agents found his backpack, which held three licenses from Canada, Virginia, and Florida belonging to Seminole County residents who recently obtained new Florida licenses. Employees told agents they had seen Greenberg taking surrendered licenses from the agency's shred basket prior to their destruction."

Prosecutors said that he was stealing the old IDs and turning them into IDs to use for himself. He had many of them for several states.

"Why do you need a whole bunch of fake identities? And why was he also, according to prosecutors, trying to figure out how to falsify concealed firearms permits as well?" Maddow asked. "Do you have any idea how many things could go wrong all at once if you just elected the wrong guy tax collector of all things? Who knew what mischief could be made out of a single job like that?"

By August of 2020, when the investigators went through his computers and electronic devices, that's when they found evidence of sex trafficking. That's where the Matt Gaetz problem begins.

See the whole explainer below:

The trials and tribulations of Joel Greenberg www.youtube.com

The tale of the most Florida of Florida Mans www.youtube.com