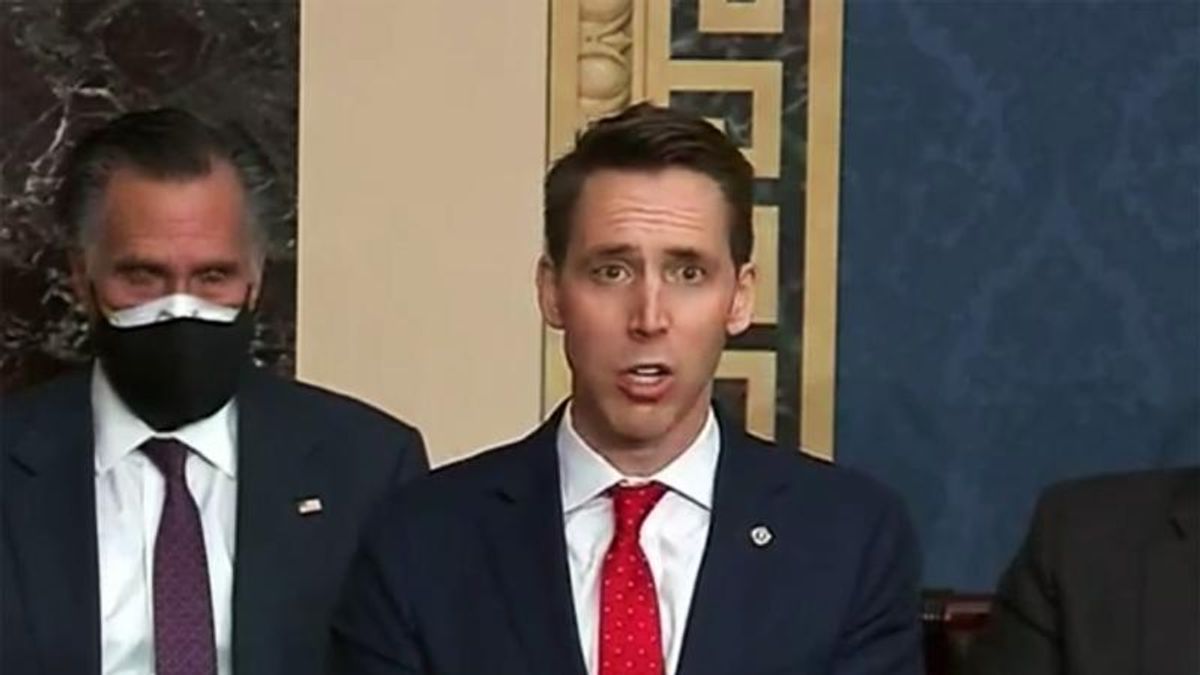 Hell-bent on earning the distinction "Hell's Senator," Josh Hawley of Missouri has doubled down on his sedition to stake out his turf as the most irrationally anti-Biden member of the Senate.

As Newsweek reports, Hawley "is now the only Senate Republican to have voted against confirming every Cabinet nominee put forward by President Joe Biden thus far. Hawley declined on Tuesday to support the confirmation of Transportation Secretary Pete Buttigieg, who made history as the first openly gay person to be confirmed to the Cabinet, and Secretary of Homeland Security Alejandro Mayorkas, the first Latino and first immigrant to be confirmed to that post.

"Twelve other Republicans joined Hawley in voting against Buttigieg, and 43 Republican senators voted against Mayorkas. But only Hawley has voted "nay" for all six of the Biden nominees that have come up for a confirmation vote.

Hawley of course didn't respond to Newsweek with a comment. But it's hard to imagine that he doesn't welcome the opportunity to stake out the most irrational Trumpist lane possible as he vies for the adoration of the Republican Party's vocal reddest-meat base.

As Newsweek accurately noted, Hawley "has complained from the Senate floor and in national media that he's been "muzzled"—a claim that his critics point out is bizarre, considering the prominent platform he's been provided to make it."

What the magazine didn't note was that this is Hawley's best hope -- albeit a faint one -- to matter in future GOP politics. Hawley's prominent role in challenging Biden's election even after the January 6 Capitol insurrection is ironically what he's hanging his hopes on.

"Biden strongly criticized Hawley and other Republicans in the wake of the January 6 riot at the Capitol," Newsweek observed. "The president blamed them for shoring up support for the "big lie" that he had won through widespread fraud—an allegation that lacks evidence and has been thoroughly debunked.

"Joseph Goebbels was a key ally of Adolf Hitler in the lead-up to and during World War II. The politician was in charge of Nazi propaganda and is infamously credited with saying, "If you tell a lie big enough and keep repeating it, people will eventually come to believe it."

Great points, all. But for the folks who believed there were "fine people on both sides" of the Charlottesville riot, Hawley's foul conduct is a badge of honor.

Hawley certainly is maintaining an undaunted front on social media. After a blissful 16-day hiatus from tweeting following his disgraceful conduct, he crawled out from under his Twitter rock. Today the banker's son educated in exclusive private schools continued his impersonation of a populist:

Also, on schools. Dems are caving to politics, not science, and want to keep our kids home. This hurts working comm… https://t.co/eCTS1tZvgN
— Josh Hawley (@Josh Hawley)1612380647.0

Despite that façade, Hawley obediently supported Donald Trump's tax cuts for the rich, a fact not lost upon social-media posters:

MSNBC's Joy Reid noted that support for the insurrection has paid some dividends for Hawley:

And there was this wonderful tribute from Bette Midler and Media Touch:

Colorado judge resigns after  repeated use of the N-word: report