Gov. Kay Ivey (R-AL) is dismissing criticisms of her new plan to use COVID relief funds to pay for more prisons.

"The Democrat-controlled federal government has never had an issue with throwing trillions of dollars toward their ideological pet projects," Ivey said in a statement, reported the Washington Post. "These prisons need to be built, and we have crafted a fiscally conservative plan."

The plot came after the London-based financial company,Barclays expressed interest in financing the Alabama mega-prisons to be built and owned by private prison giant CoreCivic, reported Forbes in April 2021. Barclays pulled out after saying that the company wanted to move "away from supporting the infrastructure behind mass incarceration."

Forbes explained then that Barclays may have "misjudged" the situation "before going to market was the diversity of risk factors this bond represents: political, social, and reputational, for being connected to an industry rife with documented human rights abuses."

So, Ivey had to find new solutions for "the state's ailing prison infrastructure." As the Post explained, Alabama has a serious prison infrastructure problem with long-standing issues. Advocacy groups have called for reforms to the system. The Southern Poverty Law Center said Alabama's prisons were in "crisis," saying that the justice system in the state is what needs to be reformed, not the prison construction.

Alabama has an incarceration rate of 938 per 100,000 people, reported the Prison Policy Project. It far surpasses the U.S. average with rates dramatically increasing over the last 40 years. The overwhelming number of people incarcerated in Alabama are Black or Hispanic. 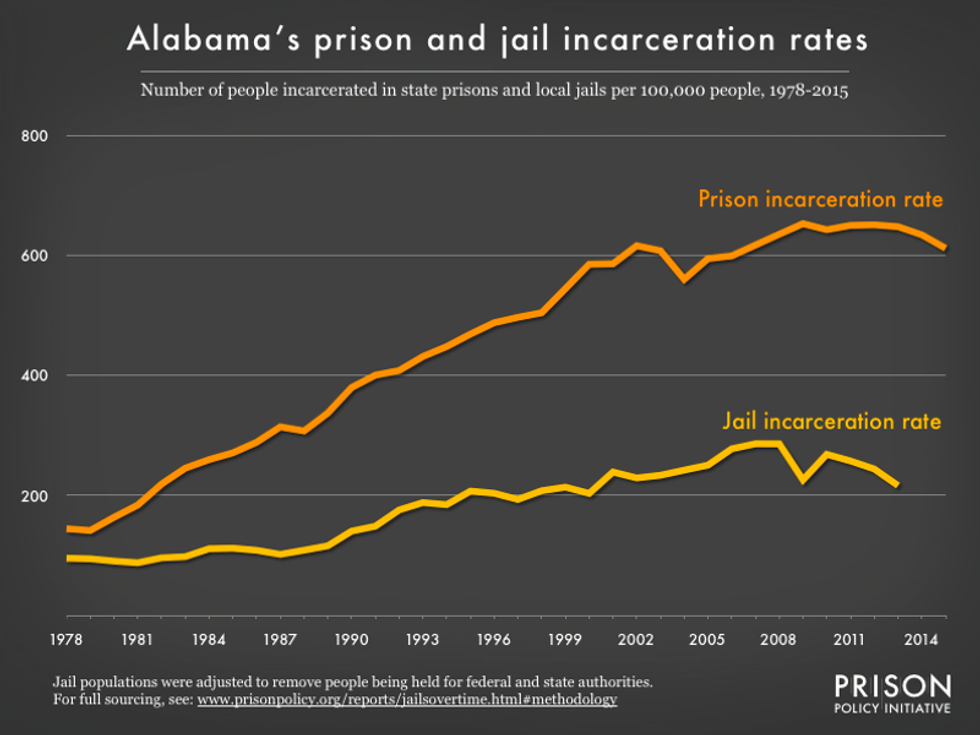 Meanwhile, Alabama has been one of the hardest-hit states in the country for COVID-related deaths. Thus far, almost 15,000 people have died in the state. The federal government swooped in to help with the American Rescue Plan, but instead of spending it on COVID-related issues, Ivey wants to funnel the cash to build for-profit prisons.

The money has few restrictions, explained the Post. It says that governments must use it to help residents and businesses directly hurt by the pandemic, invest in long-term projects or supplement budgets hurt by budget shortfalls due to the shutdown. Ivey is using that to meet her two-year commitment to building the two men's prisons.

In June, Ivey even used a kick-off event for her reelection campaign to reveal that negotiation for the lease fell through, but that she was committed to figuring out how to ensure the prisons were built.

Ivey has drawn attention by lawmakers concerned it is a misuse of funds.

"Directing funding meant to protect our citizens from a pandemic to fuel mass incarceration is, in direct contravention of the intended purposes of the ARP legislation," Rep. Jerry Nadler (D-NY) wrote in a letter to Treasury Secretary Janet Yellen.

Republicans on the ground in Alabama have turned the questions to being a war between Alabama and "New York liberals" trying to tell Alabama what they can and can't do.

Republican state Sen. Greg Albritton said, "We can't expect to house people, inmates, in conditions that are deteriorating and unhealthy. We've got to fix the problems. The prisons are falling in."

University of Alabama historian Dr. John Giggie, told Reckon South that the mass incarceration problem in the state can be found in "slave patrols, mass lynchings and convict leasing."

Reporter Beth Shelburne has spent her career documenting the prison industrial complex in the U.S. She told Reckon South that the idea to build the mega-prisons isn't a new one. Former Gov. Robert Bentley (R-AL) proposed the idea several times, with the GOP legislature voting it down twice.

"And now what Governor Ivey has taken the idea and basically circumvented legislative approval by doing this public-private partnership," said Shelburne. "It would be a design, build, lease deal. Private companies—and she's now named who those companies are. CoreCivic is one of them, one of the largest private-prison companies in the world—would design these facilities, build them, and the state would lease the facilities for $88 million a year for up to 30 years."

She characterized the plan as Alabama becoming essentially a "renter" to a privately-owned mega-prison. Once the lease is over the state owns nothing, and they hand over the mega-prison, paid for by the federal government, to the private prison company.

" We renegotiate and they [increase] the $88 million a year rent to what? $100 million? I think it's fiscally an insane idea to propose spending that much money to build even more prisons to incarcerate people," said Shelburne.