When Kelly Donohue racked up his first win on the beloved trivia TV game show Jeopardy!, he likely had no idea that by his third win, he'd be defending himself against a growing mob of people on the internet accusing him of being a covert white supremacist. As of this writing, almost 600 former Jeopardy contestants have signed an open letter demanding that he publicly apologize for the "ramifications" of a "gesture he made" at the outset of his fourth appearance on the show.

The gesture the former contestants are referring to came during a moment when Donohue raised his hand to his chest and extended three fingers, signifying to the audience that he was a three-time champion. Returning after his first win, he raised one finger. After his second, he raised two. But the former contestants, many of whom likely think of themselves as having above-average intelligence, didn't share in Donohue's excitement. They saw the gesture as a "racist dog whistle" -- namely, the "OK" hand symbol, which many in left-wing circles are convinced is a way white supremacists say hello to each other. Some pointed to the fact that Donohue previously had a cover photo on his Facebook page of a famous image of Frank Sinatra giving the OK sign while sitting at a dinner table, an unfortunate coincidence for Donohue, since it only further fanned the flames of the accusations.

I'm not going to delve into the history of how the gesture became the focus of a mind numbingly-stupid conspiracy theory, but Abby Ohlheiser of The Washington Post gave a pretty good explainer in an article from 2019:

"The 'Okay' hand sign now lives in a purgatory of meaning, along with other memes that have been at least partially radicalized because online racists thought it would be funny to radicalize them. Pepe the Frog lives there, too, as does 'Kek,' originally an inside joke from World of Warcraft that, by way of 4chan, now appears on banners stylized to look like Nazi flags at white nationalist rallies," Ohlheiser wrote. "We're in purgatory, too, paralyzed by the desire to react strongly to expressions of racist extremism while also acknowledging that the "Okay" hand sign simultaneously does and does not signify those beliefs."

"It's a trap designed to ensnare well-meaning people by hacking our tools for understanding each other. And it works every time," she added.

The letter, which was published at Medium on April 28, immediately hints that Donohue may have racist tendencies. It starts by calling him out for answering a clue "with a term for the Roma that is considered a slur." Indeed, Donohue answered with the term "gypsy," which is outdated and considered insensitive, but there clearly was no malicious intent. "Yes, it may be an innocent or ignorant reply, and yes, it was technically correct. But on a television show for an international audience, the impact on a larger stage needs to be taken into account," the letter states, adding that it wasn't the first time the term popped up on the show and that Jeopardy! writers should "remove this word from their vocabulary when it's not being used in the context of a title of an artwork or a direct quotation."

Fair enough, but it's clear that the letter's authors are trying to establish a pattern.

"Tuesday, April 27, was a more widely felt misstep," the letter continues. "During his on-camera introduction, Kelly made a gesture with his hand that he has since claimed was an indication that he had won three games,. He had, on previous episodes, indicated with one finger and two fingers that he had won one and two games, and no reasonable person would have interpreted those gestures differently."

The problem is, we're not dealing with "reasonable" people here.

He held his thumb and forefinger together with his other three fingers extended and palm facing inward, and he tapped his chest. This, whether intentional or not, resembled very closely a gesture that has been coopted by white power groups, alt right groups, and an anti-government group that calls itself the Three Percenters. In a public Facebook post that has since been deleted, Kelly states, "That's a 3. No more. No less." His public Facebook profile also featured a cover photo of Frank Sinatra making a similar gesture. This was either erased or made private on Wednesday morning, along with hundreds of public comments on his few "Jeopardy!"-related posts. Regardless of his stated intent, the gesture is a racist dog whistle. Some of the first people to notice this were not affiliated with "Jeopardy!" in any way — they were viewers who couldn't believe what they'd seen, captured it on video, and shared it to Twitter. Among them were people of color who, needless to say, are attuned to racist messaging and not appreciative that the show allowed this symbol to be broadcast.

The letter's exhaustive and petty analysis of Donohue's hand movements is glaringly misleading. As Snopes' Bethania Palma (who happens to be my sister) points out, "Donohue wasn't even necessarily making the 'OK' gesture because his palm was facing his chest and his thumb and forefinger appeared to be tucked in."

Donohue, seeing the growing outrage, posted a statement to Facebook Thursday morning saying that he was "truly horrified with what has been posted about me on social media." Understandable, since he was likely just then discovering that a conspiracy theory was emerging on Twitter accusing him of sending a coded message to his white supremacist buddies.

Almost two days after Donohue's post, the letter's signatories updated the letter with his statement at the bottom, but the letter's main text as of this writing still remains unchanged. 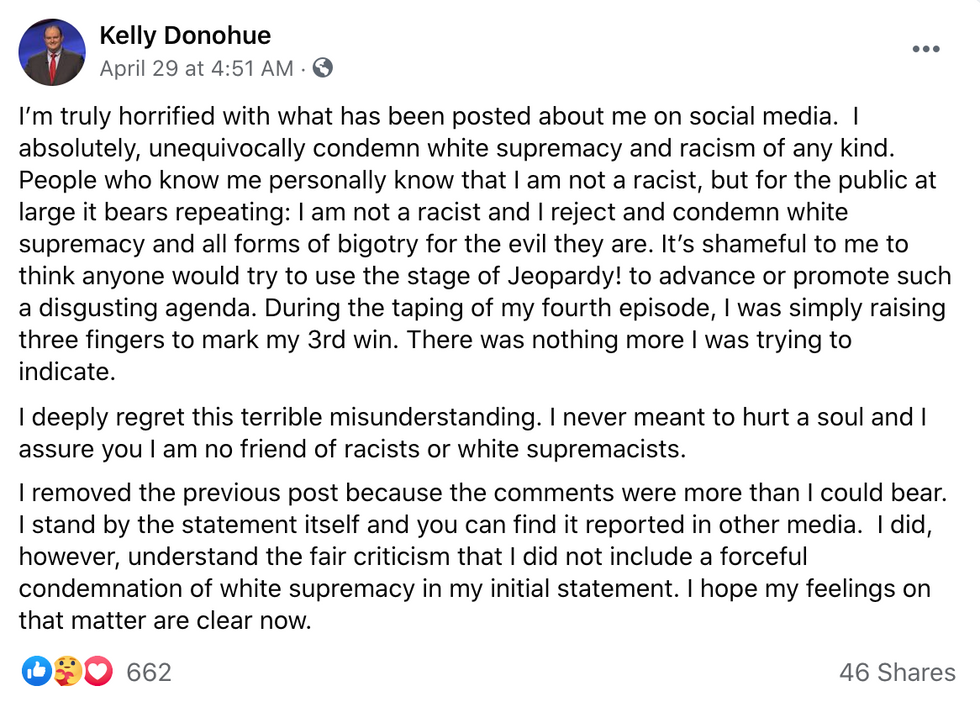 The statement is a sad thing to read. It shows a man who's panicking because he realizes he's being targeted with a false accusation that could destroy him. But it was too late.

"Anyone see the asshole Kelly Donohue/Jeopardy contestant flash the white supremacist sign?" one Twitter user wrote. "Jeopardy needs to immediately kick his ass off the show and make a statement if they haven't already."

"Did Kelly Donohue flash a 'White power' sign on today's episode?" tweeted another. "You may want to screen your contestants better. He used a slur yesterday and @andersoncooper corrected him. Now today again?"

"when i thought it couldn't get worse than Dr. Oz hosting, a Jeopardy contestant made a white supremacist hand gesture on air furthermore, when this came to light, kelly donohue refused to denounce white supremacy and has a history of trump donations – this wasn't an accident," former Jeopardy! contestant Sam Deutsch wrote in a now-deleted tweet. As of this writing, there is no evidence to suggest Donohue is a Trump supporter or has donated to Trump. I reached out to Deutsch for comment, but he hasn't responded.

Seeing coded messaging in photos or videos is a classic tactic conspiracy theorists use when they're trying to poison reality with their narratives. During a Trump rally in Milwaukee last year, QAnon adherents claimed that then-President Trump traced the shape of the letter "Q" with his finger in a covert message to his supporters. Stories like this have been emanating from the QAnon sphere since Trump won in 2016 and they deserve every bit off mockery that comes in response. Yet here we have a group of almost 600 people, who are assuming the public role of anti-racist activists, employing the same logic. 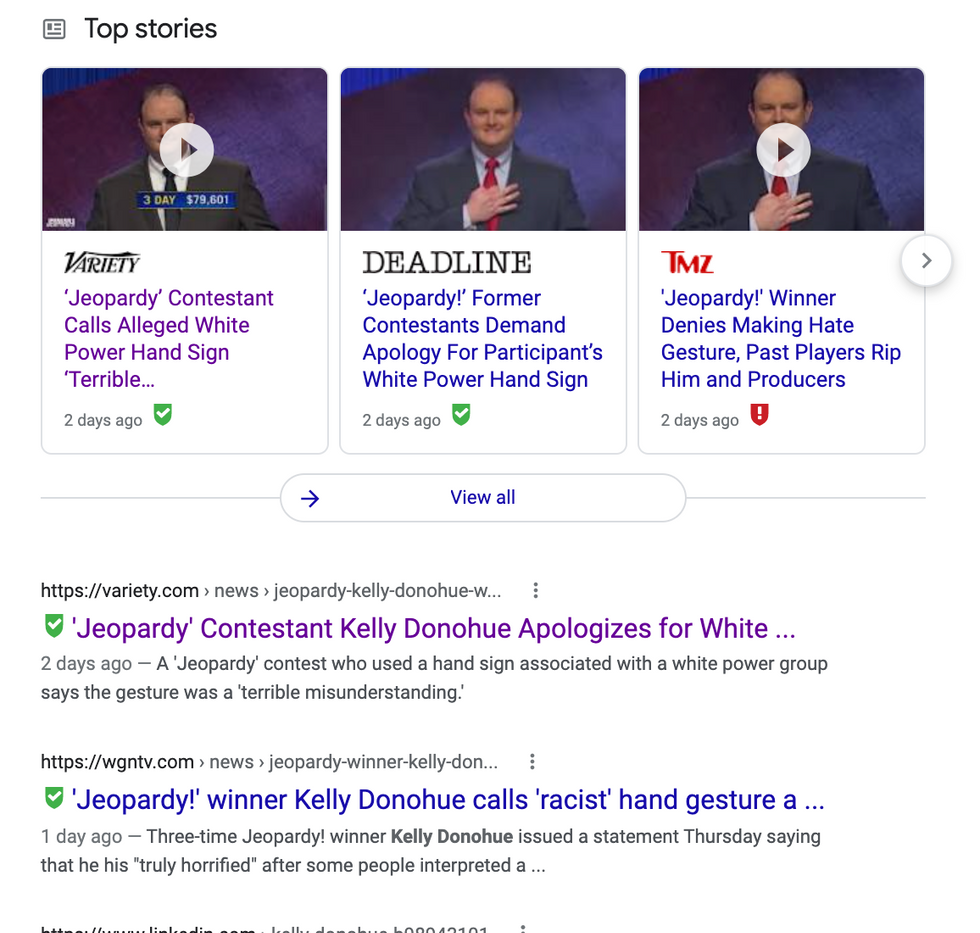 Not long after the letter was published, articles about Donohue's gesture started appearing in mainstream media outlets. The vast majority of them were framed in a manner that only increased the growing suspicions surrounding his intent.

"In a time when this country is still reeling from the impact of the January 6 Capitol insurrection, and when extremists have traded their granddads' white hoods and secrecy, for khaki pants, Fred Perry polos, and social media accounts, it's irresponsible not to take this kind of thing seriously. This is one of those situations where saying nothing actually speaks volumes," VICE's Jelisa Castrodale wrote.

Aside from Castrodale's lie that Donohue said "nothing," she's asking us to take seriously an event that only happened inside the imaginations of privileged people who won't face any accountability for dragging an innocent man into a fake scandal -- unless he sues the hell out of every last one of them.