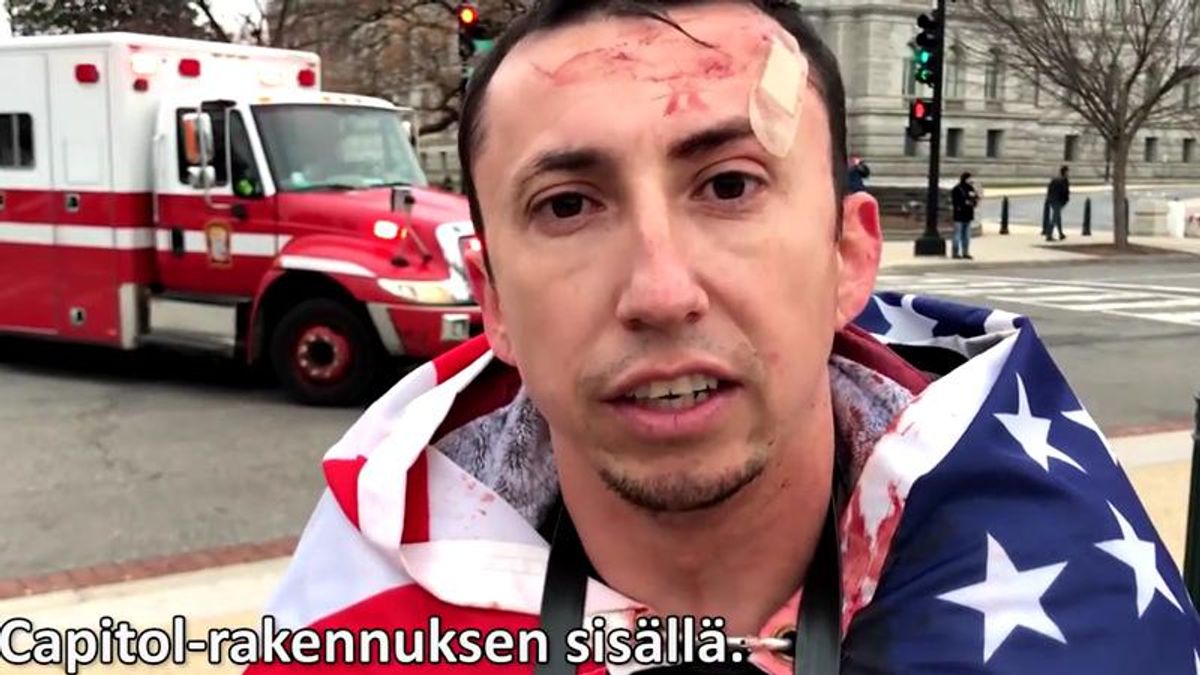 Kevin and Sean Cordon were arrested Tuesday in connection with the January 6 Capitol insurrection. The brothers from the Los Angeles area don't seem destined for Hollywood, but a brilliant website video appearance with a top newspaper in Finland may have done them in.

Here's how the LA Times reported Kevin Cordon helping himself onto the FBI's radar by making a film debut with a reporter for Ilta Sanomat, Finland's second-largest newspaper.

"The day after the Jan. 6 riot at the U.S. Capitol, an anonymous tipster from Finland alerted the FBI to a video on a Finnish newspaper 's website. It showed a man with a bloody forehead outside the Capitol building wearing a black ballistic vest and an American flag as a cape.

"There were people scuffling with the cops, and that's when I got hit with a projectile — not sure what it was," the 33-year-old man, Kevin Cordon of Alhambra, told a U.S. correspondent for the Finnish publication.

"And then from there, we proceeded into the broken windows and into the Capitol building. We were walking around the hallways, and the Trump supporters were all going nuts.

"It's clear that this election is stolen, there's just so much overwhelming evidence, and the establishment, the media, big tech are just completely ignoring all of it — and we're here to show them we're not having it," Kevin Cordon told Finnish reporter Mikko Marttinen in the video. "We're not just going to take this laying down."

The brothers were presumably not laying down Tuesday when charged with "violent entry and disorderly conduct on Capitol grounds and other crimes stemming from the assault on the Capitol," according to the Times. "At their initial appearance in U.S. District Court in Los Angeles, U.S. Magistrate Michael Wilner ordered them each released on $50,000 bond. Both will be under electronic location monitoring while awaiting trial, and they were ordered to surrender any firearms."

There's is an interesting case study from Tinseltown as to why it's not a great idea to provide a reel of one's dubious activity. More from the Times:

"More than 300 people have been charged with federal crimes in the Capitol riot, including more than a dozen from California. Many of them posted videos of themselves at the Capitol on social media or openly discussed being there in television interviews, giving prosecutors a rich trove of evidence now being used against them in court.

"In a criminal complaint unsealed Tuesday, FBI agent Shane Anderson outlined the weeks of sleuthing that led to the arrest of the Cordon brothers after the initial tip from Finland. The two men featured in the newspaper's video appeared to match the photos on the Cordon brothers' driver licenses, Anderson wrote.

"Capitol surveillance footage showed the brothers outside the building near a gathering of police officers, then climbing through a window to enter the Capitol 10 minutes later, according to Anderson.

"Cameras inside the Capitol captured the brothers walking through the Crypt beneath the Rotunda, then outside the building as Kevin Cordon spoke to the Ilta Sanomat reporter awhile later, Anderson said.

"At 3 p.m., he added, Cordon was seen making a phone call, and records confirmed a call at that time from his cellphone in Washington to a person who shares his residence in California.

"Verizon records obtained through a search warrant showed that Kevin Cordon's phone number connected to a cell site that serves the interior of the Capitol building, the complaint said.

"And flight records showed that the Cordon brothers bought tickets on a Jan. 5 red-eye from Los Angeles International Airport to Washington, then returned on Jan. 7. Surveillance video from a United Airlines boarding area at LAX showed a man resembling Kevin Cordon wearing an American flag cape, according to the FBI agent."

And of course there was this supporting evidence from the defendant's own social-media account:

"The Twitter feed of Sean Carlo Cordon includes a post showing his admiration for Trump and his belief in the former president's lies about winning an election that he actually lost by 7 million votes.

"In December, Sean Carlo Cordon posted complaints about vote recounts in Georgia, one of the states Trump narrowly lost. 'Not auditing the vote is further criminality,' he wrote."