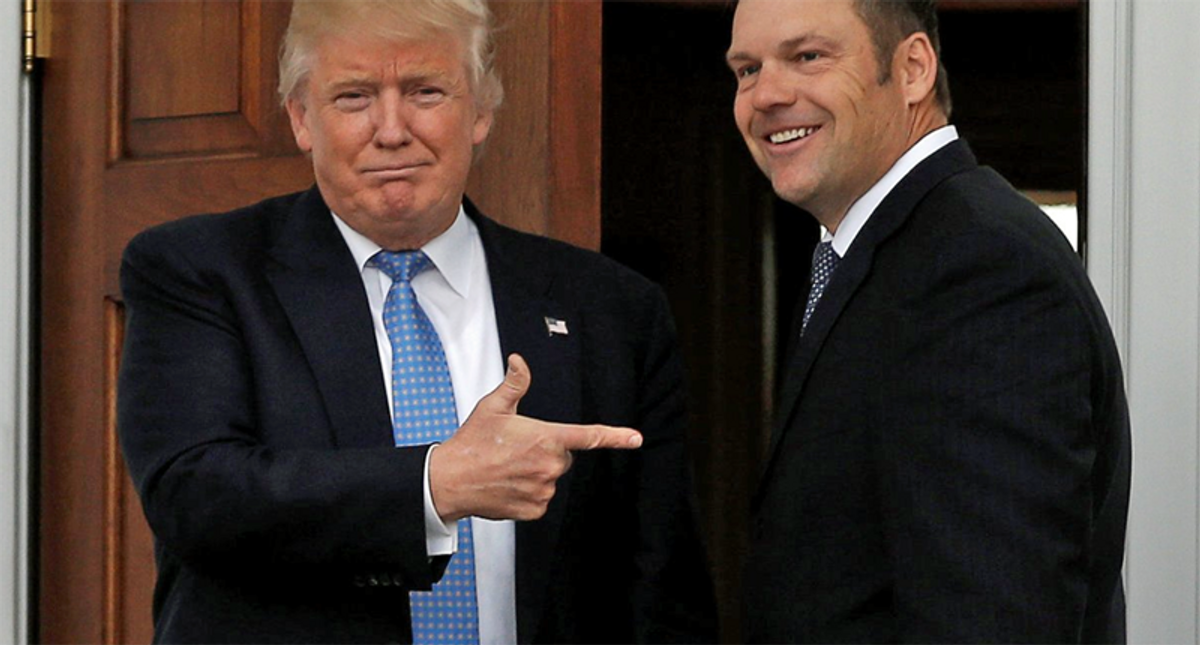 Kansas Republican candidate for House, Senate and governor, Kris Kobach, attempted to get the state legislature to buy a Wichita-based venture capitalist's cleaning device for COVID-19. The only problem is that it never really worked.

Investigative reporters at the nonprofit Kansas Reflector explained that In October 2020 Kobach made a sales pitch for Daniel Drake's company calling it a "revolutionary" device that would "kill COVID" and bring "several hundred jobs back to Wichita."

"This stuff is very cutting-edge," the Reflector said, citing Kobach's testimony. He claimed that he wanted Kansas to get the "first bite at the apple."

The device, called the "Scent Crusher," uses "aerosolized ozone, a tri-oxygen molecule, to sanitize hunting and sports products," said the description. But after a two-month investigation by Columbia Journalism School, the claims were unable to be verified. The "Sarus Systems" product tells users to drop an "optimizing agent" tablet into a water tank, turn the machine on and leave the room for 90 minutes. Drake claimed that the product would "actually kill COVID, SARS-CoV-2, everywhere, everywhere, it can touch."

Drake then claimed that a test on Sarus Systems from MRIGlobal, a research company in Kansas City, Missouri proved it would deliver on the claims. The problem, however, is that "the study is heavily redacted" with heavy redactions in a report that says, "CONFIDENTIAL" across the top. Lawmakers were given the unredacted copy of the study, however.

Drake has a line of odor eliminators under the name Scene Crusher. It costs at most $349.99, but the Sarus Systems product Kobach tried to get the legislature to buy was $15,000, according to the presentation documents given to the Jackson County Board of County Commissioners on Sept. 14.

Drake said he came up with the idea to modify his Scene Crusher to disinfect against COVID-19 last January.

The Los Angeles Emergency Management Department was "using our prototypes on another product," he said in another interview, according to the Reserve. "And they called me and asked, 'Hey, would your system kill COVID?' Probably."

In Jan. 2020, the virus hadn't even been identified as a major virus spreading throughout the United States. It was until Jan. 21 that the first person was identified to have COVID-19, according to a timeline. It was on Jan. 31 that the WHO finally issued a Global Health Emergency due to the coronavirus.

The Reserve cited Ellen Linaac, the department's administrative and finance division chief, who said there are no records of the Los Angeles Emergency Management Department working with Drake. She said that they use another company for all of its PP, Coastal Environmental Services, which also said they had no relationship with Drake.

Read the full report at the Kansas Reflector.