Kyrsten Sinema playing both sides on policies has just made both sides hate her: MSNBC panel 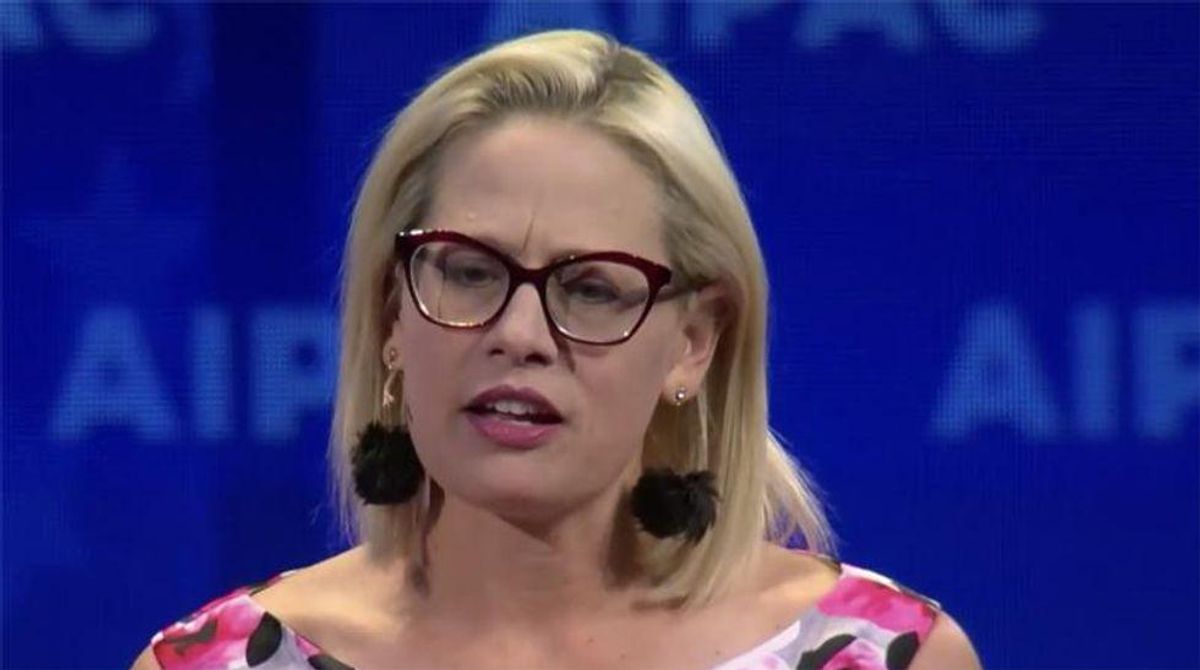 The old adage from Jim Hightower goes that "the only things in the middle of the road is a yellow stripe and dead armadillos." Such is the case with Sen. Kyrsten Sinema's (D-AZ) political career, according to recent polls.

During an MSNBC segment and discussion, it was revealed that the new senator has managed to hack off both Democrats and Republicans in her attempt to play both sides on the filibuster. A CNN poll of Arizona voters showed 50 percent of Democrats hold a favorable vote of Sinema, with a 30 percent unfavorable view. If the election was held today, Sinema would lose. That can make things very difficult for Sinema to raise money for her reelection.

"Trish Muir, the chair of the Pima Area Labor Federation, a local council of the AFL-CIO in the Tucson area, which is historically home to Arizona's Democratic base, said that the federation's members 'are not just liberal Democrats' and from 'all walks and all political beliefs' but have nevertheless been unable to get Sinema's attention," wrote The 19th in May.

It's one thing to refuse to answer questions to the media about your position, but when the senator in your state ignores constituents, it can be detrimental to a political future.

"There's not an easy resolution because in the absence of any justification, she's left us to wonder what does she care about, what does she actually want?" said Sarah Jones of New York Magazine. "Is she really just in office for herself or does she care about passing legislation? She does have this nostalgic view of the filibuster that Sen. [Joe] Manchin (D-WV) seems to share, which is unfortunate."

Jones noted that it's entirely possible that Sinema, like Manchin, believes in an alternative reality of history that either they've created themselves or Republicans have convinced them of. Regardless, it's a lie.

"Sen. Joe Manchin is, I would say, from a more conservative state," Jones continued. "I would argue that Sen. Sinema has a little bit more wiggle room that she's currently not exercising. I think it's hard to argue that her constituents really wanting to keep the filibuster at this point."

Yasmin Vossoughian asked if there was anything that could change Sinema's mind, but Jones didn't have a good answer.

"We're talking about a senator who was photographed wearing some interesting profanity jewelry, so I don't know if anything can change her mind at this point," said Jones. "She seems pretty determined and willing to double down."

It's unclear if Sinema is willing to risk her entire career on the decision.

Former Hillary for America international political director Amanda Renteria explained that Sinema is in a difficult position because her Democratic colleague Sen. Mark Kelley (D-AZ) is continuing to talk about how getting rid of the filibuster is better for Arizona. Sinema, is in contrast to his message and he seems to be speaking to Arizonans more frequently about it than she is.

If the election was held today Kyrsten Sinema would lose www.youtube.com