Trump impeachment opener was ‘perhaps the worst argument I have ever heard from a lawyer’: legal experts 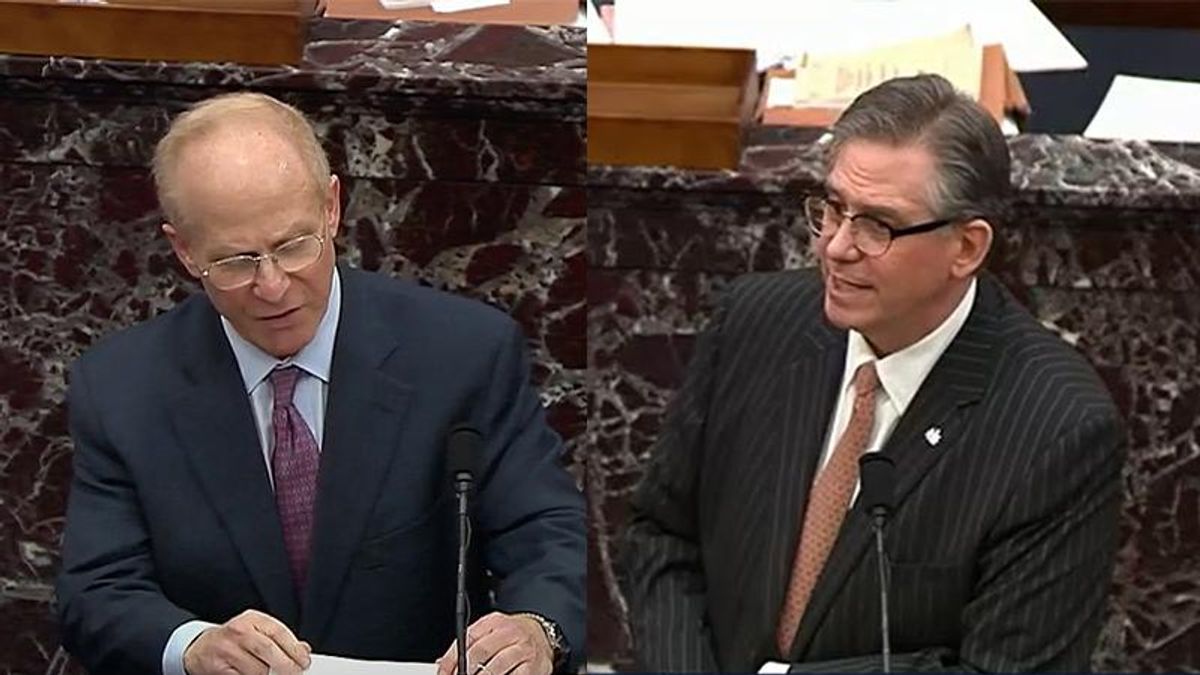 As opening statements began Tuesday for President Donald Trump's second impeachment trial, legal experts flocked to Twitter to explain the ins and outs of the arguments for and against conviction.

While the first hour dealt with the case laid out by Democratic House Impeachment Managers, the second portion of the opener featured Trump's lawyers, who left experts scratching their digital heads.

Law Professor Jennifer Taub was live-tweeting the statements calling out specific lies that the defense team tried to claim. Outside of calling it "the nacho hack video," she also disputed claims that Trump wasn't given the opportunity to defend himself because there wasn't a hearing in the House. It was an argument she called absurd.

She also responded to the video that the Trump team showed attacking Democrats for saying that they wanted to impeach Trump early on in his presidency. She noted that Trump was in violation of the law on his first day in office.

This would be a good time to remember that President Trump was violating the foreign and domestic emoluments clause… https://t.co/UypKoMPgmY
— Jennifer Taub (@Jennifer Taub)1612904973.0

Schoen says that because Trump is no longer the president, and because Speaker Pelosi waited between late January w… https://t.co/UEFqjMbi3T
— Jennifer Taub (@Jennifer Taub)1612905854.0

See the rest of the comments from legal experts below:

Rudy Giuliani was conflicted out of doing his My Cousin Vinny thing, so someone had to step up.
— Ari Melber (@Ari Melber)1612905671.0

The Constitution has neither served us well, nor is unique, nor is it a beacon. Due process was really treated as… https://t.co/XtnhZlaGkD
— Elie Mystal (@Elie Mystal)1612906046.0

In case you were wondering whether there is anything to the due process argument that is occupying an inordinate am… https://t.co/T3d7d8WuKq
— Norm Eisen (@Norm Eisen)1612905635.0

Trump’s lawyers arguing that he’s entitled to due process. Agreed, but in what way has it been denied? That’s what this trial is for.
— Barb McQuade (@Barb McQuade)1612905548.0

The Trump defense today is like a criminal defense summation that addresses anything and everything but the evidence.
— Andrew Weissmann (@Andrew Weissmann)1612904221.0

The Schoen argument is basically: the people who tried to kill those in this chamber are mad at this trial.
— Elie Mystal (@Elie Mystal)1612904272.0

This defense is the most Trumpian thing I have ever heard. His lawyer accuses House managers of proceeding because… https://t.co/qYeqL9duWF
— Barb McQuade (@Barb McQuade)1612904422.0

I feel like I’m back in NYC at a mob summation. Not a rational word or sustained argument. Just distraction. The S… https://t.co/4hzk7lVUdn
— Andrew Weissmann (@Andrew Weissmann)1612904775.0

Trump lawyer Bruce Castor opens with an attempt to "lower the temperature" by focusing on process, and distant his… https://t.co/1AtOtaIME4
— Ari Melber (@Ari Melber)1612904028.0