In the early 1990s, British neuroscientist Karl Friston was poring over brain scans. The scans produced terabytes of digital output, and Friston had to find new techniques to sort and classify the massive flows of data.

Along the way he had a revelation. The techniques he was using might be similar to what the brain itself was doing when it processed visual data.

Could it be he had stumbled upon a solution to a data engineering problem that nature had discovered long ago? Friston’s eureka moment led to a “theory of everything”, which claims to explain the behavior of the brain, the mind, and life itself.

As we discovered when we put together a collection of papers, the theory – known as the “free energy principle” – is controversial among scientists and philosophers.

Friston’s initial idea was appealing because the problem facing the brain is similar to that facing an experimental scientist. Both must use the data they have to draw conclusions about events they cannot observe directly.

The algorithm Friston used to draw conclusions from his data – a mathematical operation called “minimizing free energy” – was based on existing techniques in statistical analysis.

But Friston didn’t stop there. He reasoned that the problem of drawing conclusions from limited information is a problem faced by all living things.

This led him to the “free energy principle”: that every living thing, everywhere, minimizes free energy.

But what, exactly, is free energy? Why might all living things minimize it?

Start with a simpler idea: every organism is trying to minimize how surprising its experiences are. By “surprising”, we mean experiences that have not been encountered previously by the organism or its ancestors.

Your ancestors were successful enough to produce a lineage that eventually produced you, so what they experienced must have promoted survival. And your own experiences so far have resulted in you still being alive.

So experiences you have not had before – surprises, in other words – may be dangerous. (The ultimate surprise is death.)

We can dress this idea in mathematical clothes by defining surprise in terms of probabilities. The less probable an experience, the more surprising.

And that’s where “free energy” enters the picture. It’s not energy as we would usually think of it – in this situation, free energy measures how improbable your experience would be if a certain unobserved situation were true.

Here’s an example: imagine you are picnicking in the park, watching two friends kick a football to and fro. Your view is occluded by a tree, so you don’t see the full trajectory of the kicked ball.

Now, it is possible that there is a third person behind the tree, who catches the ball each time it passes them and then throws on a spare ball they have handy. 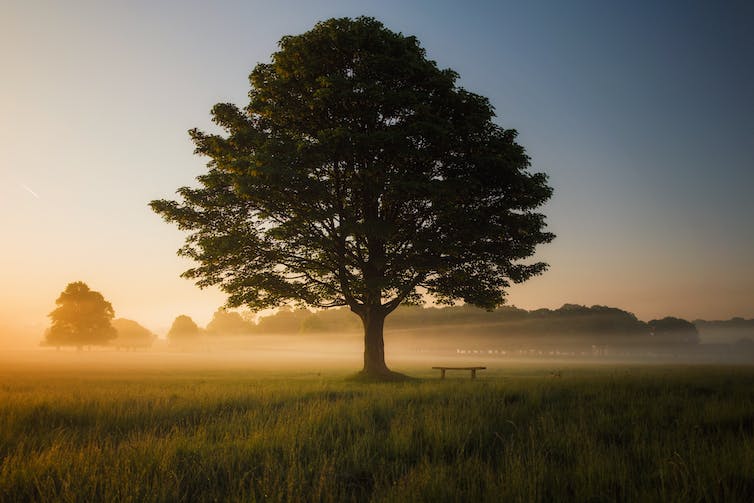 There might be a person behind this tree. But on the whole, it’s less surprising to believe there isn’t one.Simon Wilkes / Unsplash

However, there is no evidence for the existence of this third person, so their existence would be very surprising. So you can minimise your surprise by believing there is no secret third person behind the tree.

Minimizing free energy can help guide our actions, too. According to the free energy principle, you should do things that will change the world in such a way that your experiences are less likely to be surprising!

How much does a ‘theory of everything’ actually explain?

So the free energy principle is a “theory of everything” spanning neuroscience, psychology and biology! But not everyone is convinced it’s a useful idea.

Some of the skepticism concerns whether or not the theory is true. An even bigger concern is that, even if it is true, it may not be very useful.

But why would people think this?

These systems contain a huge amount of potentially important detail, and when we model them we cannot hope to capture all of it. So how much detail should we attempt to capture, and how much should we leave out?

Levins concluded there is a trade-off between the level of detail in a model and the number of systems it applies to. A model that captures a lot of detail about a specific system will be less informative about other, similar systems.

For instance, we can model the technique of an Olympic swimmer in order to improve their performance. But that model will not faithfully represent a different swimmer.

On the other hand, a model that covers more systems will be less informative about any particular system. By modeling how humans swim in general, we can design swimming lessons for children, but individual differences between children will be ignored.

Too general to be useful?

The free energy principle is a highly general model. It might even be the most general model in the life sciences today.

But how useful are such models in the day-to-day practice of biology or psychology? Critics argue Friston’s theory is so general that it is hard to see how it might be put to practical use.

Proponents claim successes for the free energy principle, but will it turn out to be an enormous breakthrough? Or do theories that try to explain everything end up explaining nothing?

A federal judge tossed out a lawsuit from the right-wing law outfit Wisconsin Institute for Law & Liberty (WILL) that challenged the Biden Administration’s student debt forgiveness plan.


WILL had filed the lawsuit earlier this week on behalf of the Brown County Taxpayers Association, arguing the plan to forgive up to $20,000 in student loan debt for people who make less than $125,000 a year is illegal executive overreach.

TOPEKA — At national and local levels, Kansas Republicans are rallying around the issue of battling fentanyl to win over voters in a close race.

Here's why Trump probably hasn't returned all the classified documents he took from the White House: analysis

The question of whether Donald Trump has returned all the documents he took from the White House to Mar-a-Lago, and now the Justice Department is telling Trump's legal team that it believes he hasn't returned them all.

According to The Washington Post's Aaron Blake, there is "myriad evidence" that the Justice Department suspected that there might be more that Trump is hiding since the FBI search of his resort.