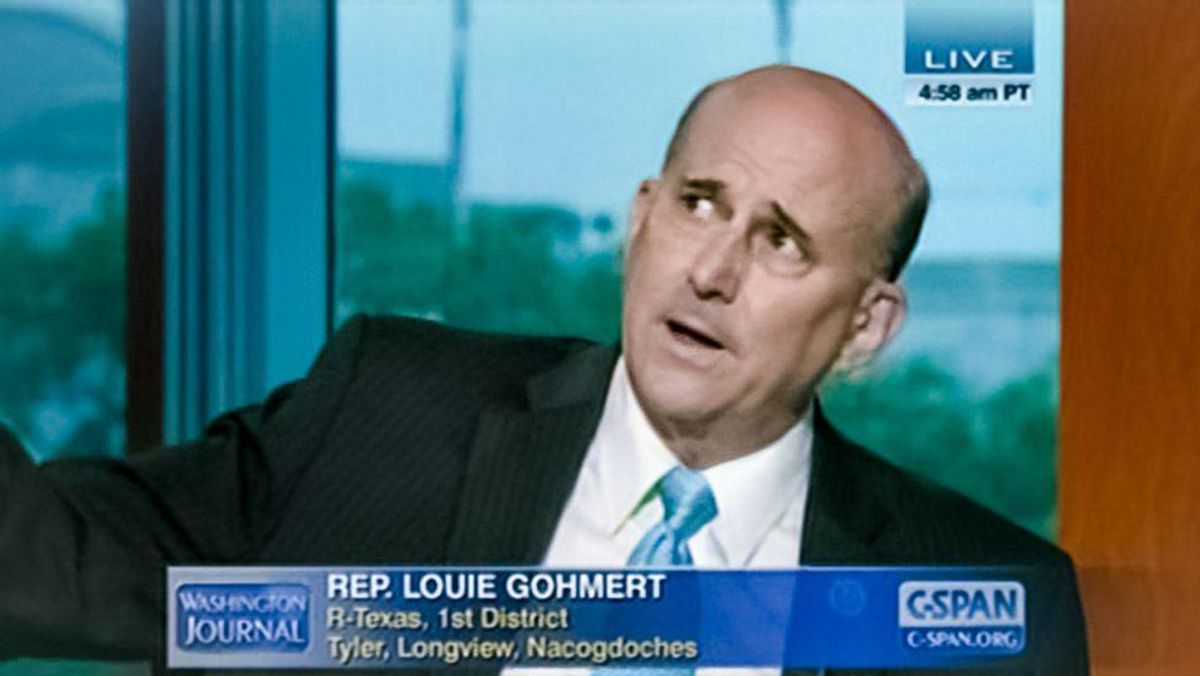 Rep. Louie Gohmert (R-TX) was mocked this week after he asked federal Forest Service officials if they could change the orbit of the Earth and moon.

Gohmert made the remarks during a House Natural Resources hearing. A video clip was shared by Forbes.

ORBITS: Rep. Louie Gohmert (R-TX) asks whether the Forest Service or the BLM can alter the orbit of the moon or the Earth in order to fight climate change during a House Natural Resources hearing pic.twitter.com/yYiOyi2cMZ
— Forbes (@Forbes) June 8, 2021

"I understand, from what's been testified to the Forest Service and the [Bureau of Land Management], you want very much to work on the issue of climate change," Gohmert said. "I was informed by the immediate past director of NASA that they found that the moon's orbit is changing slightly and so is the Earth's orbit around the sun. We know there's been significant solar flare activities, and so, is there anything that the National Forest Service or [Bureau of Land Management] can do to change the course of the moon's orbit or the Earth's orbit around the sun? Obviously, that would have profound effects on our climate."

The expert being questioned by Gohmert diplomatically avoided the question.

"I would have to follow up with you on that one, Mr. Gohmert," she replied.

Gohmert was quickly shamed as the "dumbest member of Congress" by commenters on Twitter.

Lol. How utterly ridiculous. Only I can do that w just the right coordinates in my Jewish space laser
— Cliff Schecter (@cliffschecter) June 9, 2021

I watched, thinking there is context that comes in to play, but Gohmert truly delivers as the "dumbest person in Congress" here. Jfc, how does he get elected?
— BgMac Vaxxed and still Masked (@bgmacneill) June 9, 2021

He thinks the bureau of land management can alter planetary orbits... Instead of corporations cutting back on fossil fuel emissions - he wants us to change our orbit?
— Cuyahoga Dave 🏳️🌈 (@DKwiatkowski23) June 9, 2021

It's quite simple, really. You just need to change the gravitational constant of the universe. 🤪https://t.co/OwiD3Zz77h
— Rob Accountability Before Healing And Unity Murphy (@RobPMurphy) June 9, 2021

That's only possible with flying unicorns. Someone should tell him that.
— tellthetruth (@9_tellthetruth) June 9, 2021

The extent of this man's stupidity can only be described as 𝘈𝘴𝘵𝘳𝘰𝘯𝘰𝘮𝘪𝘤𝘢𝘭!
🙄
— Chris Papalia (@papalia_chris) June 9, 2021

Yes sir, we have a new employee who can fly extremely fast around planets to change their orbit. He's currently in new employee orientation. pic.twitter.com/ee2TsBkA7r
— American Terrier (@poochpatriot) June 9, 2021

You have to give the man credit, when he proposes changing the orbits of Earth & the moon he says that would obviously have profound changes on our climate.

I defy anybody to refute that statement (he could have chosen apocalyptic but he went w/profound, nothing wrong w/that).
— dennis whetstone (@Zelmo999) June 9, 2021

Also to put on your Radar is that I've heard that Bigfoot is Aquaman and he's doing a two prog attack on our world to increase co's.
I'm not sure why he's doing this but it could have something to do with the moon.
Maybe the moon people are paying him we just don't know yet.
— June 1 590,000 lives lost. Remember them. (@Moredumbtweets) June 9, 2021

Someone needs to tell Louie it can be done if everyone in North America jumps at the exact same time.
— Ryan Cordell (@ryandcordell) June 9, 2021

Wow, there really is a need to educate our elected officials.

Maybe there needs to be a mandatory general knowledge exam along with a civics exam that they must pass when they submit their signatures to get their names on ballots.
— Wear A Mask! MaryGram™ 🇺🇸 (@MaryGramTM) June 9, 2021

only proper response to his question: "Well, Louie, we've looked into cutting down every single tree on Earth and building a ladder to the Moon and having someone go up there and push on it a little to try to push it back into orbit, but we'll need some more money for that."
— President Rufus T. Firefly (@Stewey444) June 9, 2021