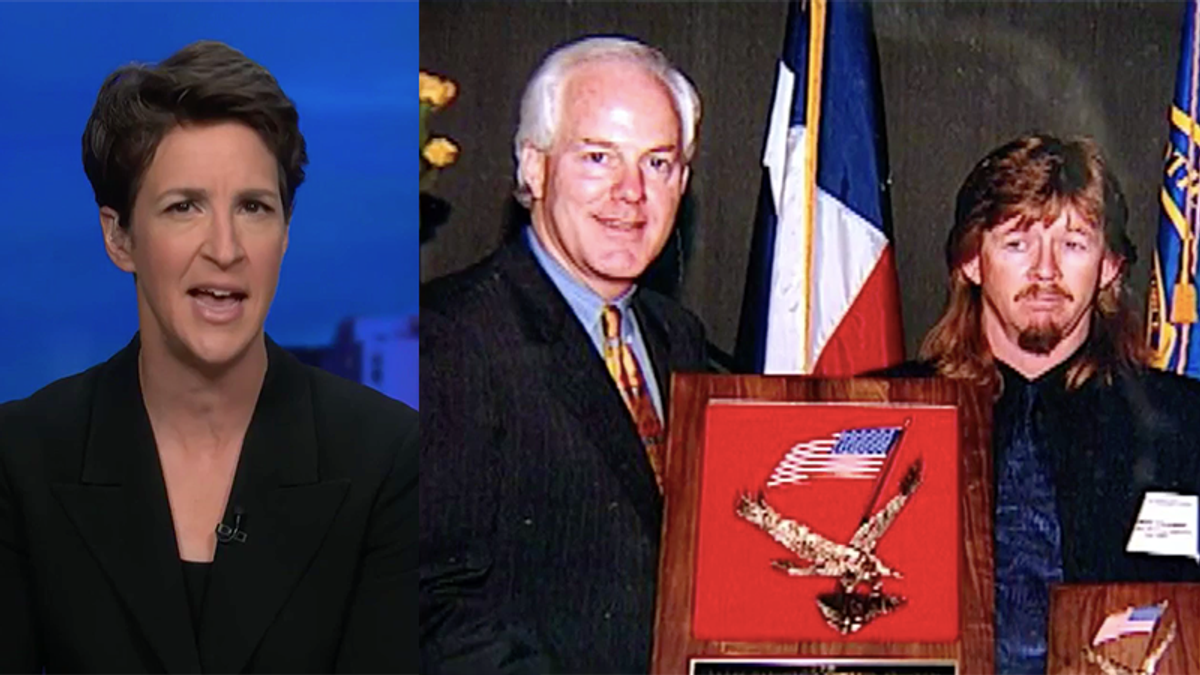 MSNBC's Rachel Maddow speculated Sen. John Cornyn (R-TX) is leading the charge against a key Justice Department nominee because she humiliated him.

Wednesday, Maddow recalled the extensive corruption of Texas cop Tom Coleman who arrested four dozen people claiming that he did an undercover operation and busted them for cocaine. An overwhelming number of those arrested were Black. There was no evidence, no recording of the alleged drug sales, no proof whatsoever. Still, the court believed his testimony over that of the individuals charged. Most were convicted and some were given sentences over 100 years.

The officer, in that case, was an N-word-spouting racist honored with a police award as Lawman of the Year from then-Attorney General John Cornyn.

Civil Rights attorney Vanita Gupta took on their case, and by 2003, all of the people charged were released and the cop was charged with perjury and a slew of other charges.

"In [Gupta's] nomination, she has, among other things, the support of every major law enforcement operation in the country, including the Fraternal Order of the Police," said Maddow. "Even they support Gupta. She is one of the senior Justice Department officials who is not confirmed in this administration because Republicans are not only blocking her nomination. They are slow-walking it through the Senate. They're trying to trip it up, try to keep her from being confirmed. Here's the thing. Here's why this is all worth knowing. Ready?

"Who do you think is the Republican senator who is leading the charge against Venita Gupta. Merrick Garland doesn't have any of his top people at the Justice Department. Vanita Gupta is going to be the No. 3 at the Justice Department and she's not there yet. Why is that? There's a Republican senator taking point on this. Leading the charge to try to keep her from being confirmed. Who is that? It's a senator from Texas. He used to be attorney general of the state of Texas. It's Texas Sen. John Cornyn, who when he was attorney general of the state of Texas, is the guy who gave Officer Tom Coleman the Texas lawman of the year award for his great work in Tulia, Texas. Before Venita Gupta came in and exposed who that guy actually was before he was convicted of perjury."

Maddow explained that all of the people in the case were given full pardons by the then-Gov. Rick Perry

"I wonder, I just wonder if Sen. John Cornyn might be at all embarrassed about this and about the young lawyer who came to Texas and exposed this thing, this terrible and cartoonishly evil thing that he had helped along, that he had celebrated, that he had given an award to," Maddow said. "It is now Sen. John Cornyn leading the charge against Venita Gupta to be the number three official at the Justice Department. Even because all the law enforcement operations endorsing her. The Judiciary Committee is due to vote tomorrow. Republicans led by John Cornyn have been demanding that she actually needs to come back and do her confirmation hearings over a second time. That's not going to happen."

Is John Cornyn opposing Vanita Gupta because she humiliated him? www.youtube.com