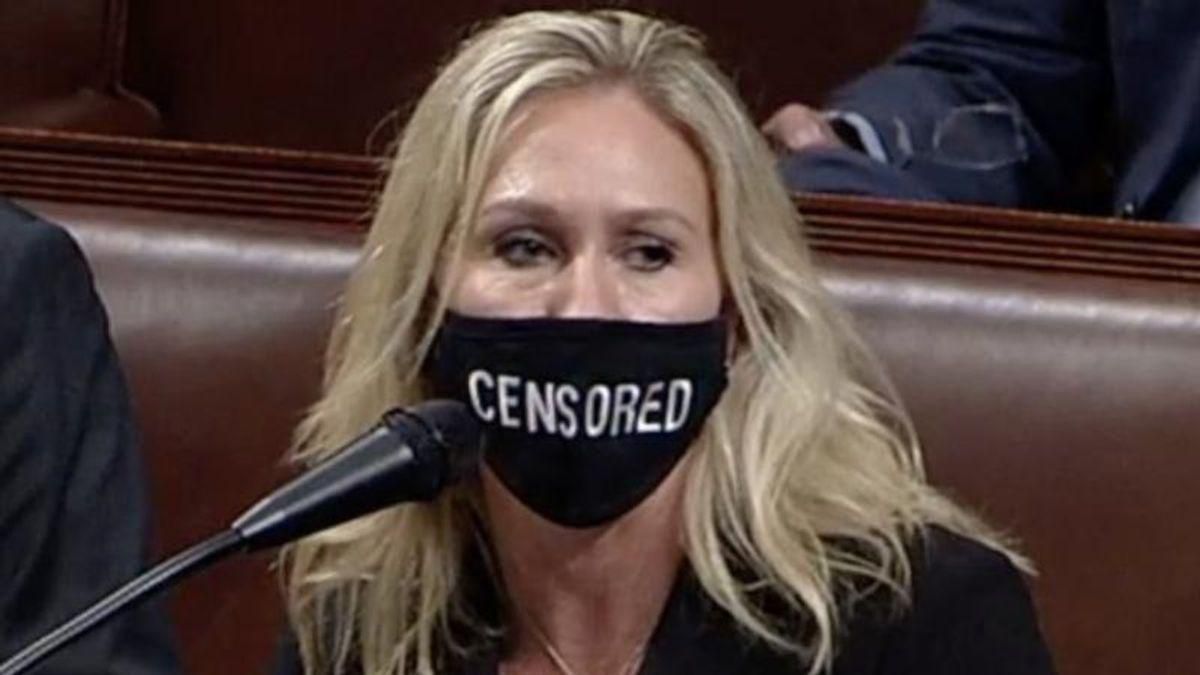 According to Greene spokesman Nick Dyer, who blamed "dirty backstabbing swamp creatures'' for leaking the document to Punchbowl News, the first to obtain the caucus' policy platform, the group's final platform is still underway.

"Be on the look out for the release of the America First Caucus platform when it's announced to the public very soon," he said on Friday. The next day, Dyer told CNN Greene "has no plans to launch anything," explaining that "she didn't approve that language."

Taking specific aim at Biden's immigration policies, the caucus had argued only a day before that "societal trust and political unity are threatened when foreign citizens are imported en-masse into a country, particularly without institutional support for assimilation and an expansive welfare state to bail them out should they fail to contribute positively to the country."

It also put forth the notion that immigrants are less educated than they've ever been, a lie which Insider fact-checked with a recent Gallup poll that found "the estimated 44 million immigrants in the United States are better educated than ever, due in part to rising levels of schooling in many of the countries they came from and an influx of high-skilled workers to the U.S. in recent years, especially from Asia."

The caucus' platform additionally touched on President Biden's infrastructure bill, the deliberations around which have devolved into a game of political football. The American First Caucus said it wanted to promote "architectural, engineering and aesthetic value that befits the progeny of European architecture," which is in keeping with Trump's now-revoked executive order banning federal buildings from taking on certain modern styles, as Forbes noted.

The American First Caucus also parroted election conspiracy talking points, claiming that the 2020 election was riddled with systemic fraud. "Across the country federal elections have been undermined by using voting machines that are readily compromised and illegally accessed whereby results appear manipulated, voters are disenfranchised, and faith in our system eroded," it alleges. "Mail-in voting, long recognized as subject to fraud, has become normalized. We will work towards an end to mail-in voting, implementation of national voter ID and substantive investigations into mass voter fraud perpetrated during the 2020 election." However, a cursory investigation made clear that the 2020 election was the least vulnerable to fraud in the entire history of the country.

Republicans were quick to distance themselves from the project and Greene on Friday.

"The hatefulness ... is only surpassed by its ignorance of American history and values," Rep. Ken Buck (R-CO), a major Freedom Caucus member, told Forbes.

Republicans believe in equal opportunity, freedom, and justice for all. We teach our children the values of toleran… https://t.co/PJGaLeuusR
— Liz Cheney (@Liz Cheney)1618608483.0

America is built on the idea that we are all created equal and success is earned through honest, hard work. It isn’… https://t.co/EsVSyCfowH
— Kevin McCarthy (@Kevin McCarthy)1618605694.0

This is unironically conservative cancel culture. The twitter mob got her. https://t.co/2uRPIG4ruw
— Justin Tiehen (@Justin Tiehen)1618694071.0