Manchin, Romney and Collins make it clear they won’t stand for mean tweets — unless a man does it: columnist 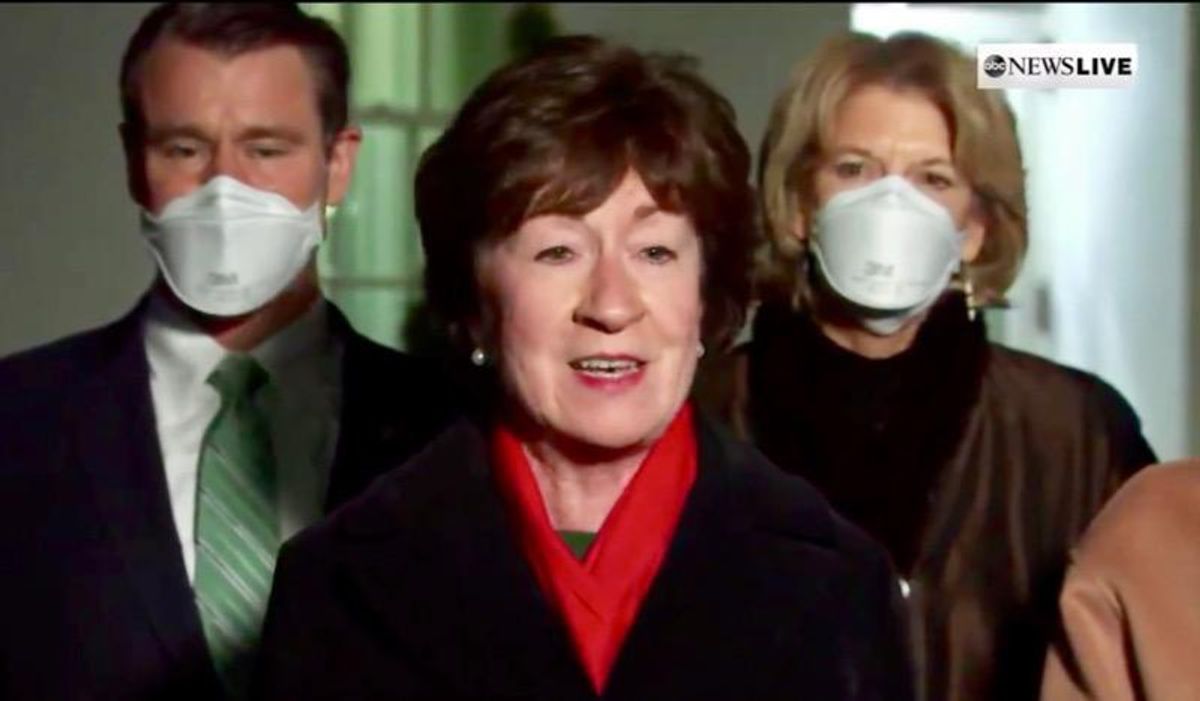 Senators Susan Collins (R-ME), Mitt Romney (R-UT) Joe Manchin (D-WV) made it clear with their opposition to Neera Tanden to be the director of the Office of Management and Budget, that it isn't acceptable for a woman to send mean tweets. But as Aaron Blake made clear, those senators find it acceptable from a man.

"This has led to charges of hypocrisy and a new standard," Blake wrote in a Washington Post column Monday. "In particular, many Republicans who now appear primed to vote against Tanden's nomination often turned a blind eye to former president Donald Trump's controversial tweets (or claimed they hadn't seen them)."

Richard Grenell faced questions in 2018 when he was nominated to be Trump's ambassador to Germany. He was later appointed to be the acting director of national intelligence. Those senators never took issue with Grenell's so-called mean tweets.

"Some of the most oft-cited past Tanden tweets include her calling Collins 'the worst,'" said Blake. "She attacked Sen. Tom Cotton (R-AR.) as a fraud, said vampires have 'more heart' than Sen. Ted Cruz (R-TX), and she latched on to a very-online effort to label then-Senate Majority Leader Mitch McConnell (R-KY.) as 'Moscow Mitch.'"

Ironically, even Sen. Lindsey Graham (R-SC) joked that someone could shoot Ted Cruz on the Senate floor and be acquitted by the Senate for it. Some of Cruz's colleagues were just as annoyed with the Texas senator last week, though their language was less colorful.

"I believe her overtly partisan statements will have a toxic and detrimental impact on the important working relationship between members of Congress and the next director of the Office of Management and Budget," Manchin said in a statement.

"Her past actions have demonstrated exactly the kind of animosity that President Biden has pledged to transcend," Collins agreed.

But when Grenell came before the Senate for a vote, Manchin didn't take issue with his partisan attacks on former President Barack Obama and Secretary Hillary Clinton.

"Without a teleprompter, Oh-bahh-mahhh isss ahhh slowww and weakkk speakerrrr ahhhh …#syria," Grenell tweeted in 2012 about Obama. He also tweeted: "Hating people who make more than you is the product of having a community organizer as president. #AnyoneButObama"

He attacked Hillary Clinton for her appearance and Michelle Obama for exercising and "sweating on the East Room carpet" as part of her "Let's Move" campaign to encourage children to be more active and eat healthily.

Neither Manchin nor Collins commented on the "toxic and detrimental impact" Grenell's attacks could have on working with Democrats.

Tanden also went after Democrats, but Grenell similarly attacked members of his own party, Blake explained.

In addition to making fun of Newt Gingrich's weight, he asked if Gingrich's wife, Callista's "hair snaps on." He later said that Gingrich's third wife "stands there like she is wife #1," asking, "does callista speak?" (sic)

Grenell passed it all off as a joke and he was approved by the Senate.

"It begs for a declared standard when it comes to who is confirmation-worthy," Blake closed. "Can someone be extremely partisan but not attack senators? Is it okay for someone to attack someone's appearance on social media and still be confirmed? And how much are apologies for past statements operative?"

He noted that questions about Tanden's qualifications for OMB are absolutely valid, but it appears the calls of hypocrisy came too late for her nomination.