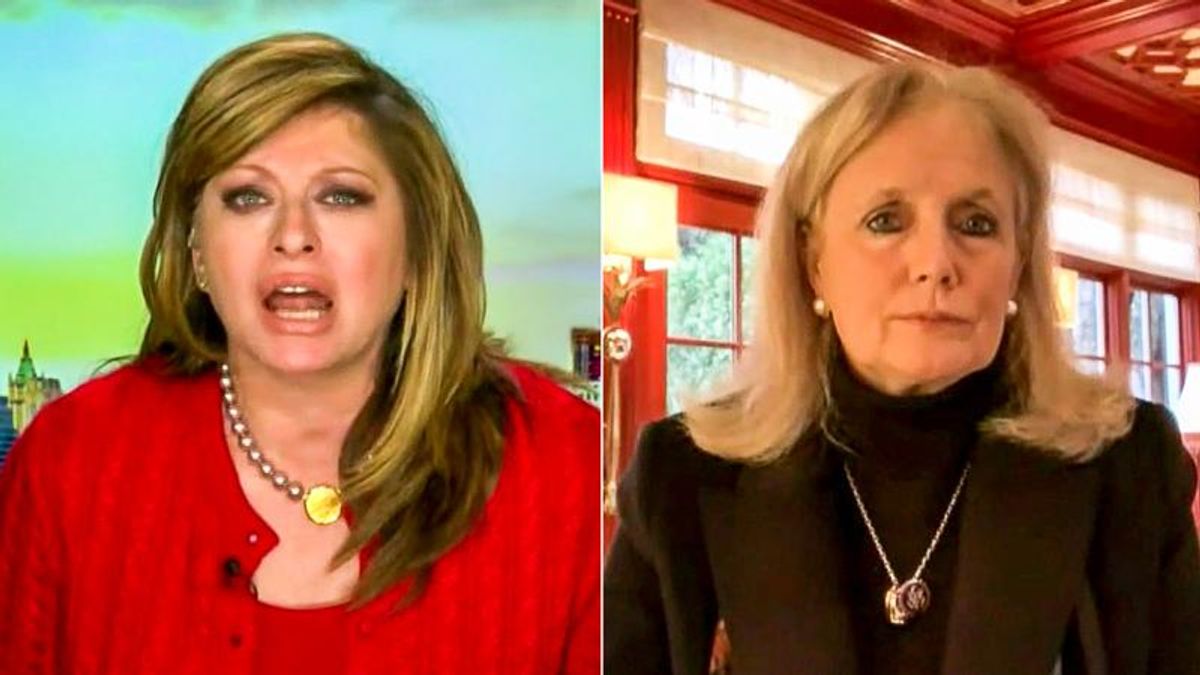 Fox Business host Maria Bartiromo lashed out at Rep. Debbie Dingell (D-MI) over a COVID relief bill that was passed by Democrats in the U.S. House of Representatives.

Throughout the 10 minute interview on Monday, Bartiromo repeatedly raised her voice at Dingell.

"The schools are not open yet, Congresswoman, so there's that," Bartiromo said.

"They need the money to open," Dingell pointed out.

"Oh, come on," Bartiromo quipped. "And all of these businesses that are affected by COVID, you're saying the arts and humanities were affected severely by COVID, that's why 300 million dollars is going there?"

"Museums! And the $200 million going for museums and then that rail car in San Francisco that Nancy Pelosi has been funding, putting as much money as she can every act, every bill -- that!" the Fox Business host complained.

"I mean, seriously, we're looking at the list in front of us. We're not stupid, Congresswoman," she added.

Bartiromo immediately interrupted when the congresswoman attempted to respond.

"I know a hundred restaurants that have gone out of business! Is there any money for restaurants?" she shouted.

"Yes, there is money for restaurants," Dingell replied. "We have money in this bill that will give restaurants relief."

"Only 9% of the money is earmarked for COVID related things!" Bartiromo said. "The rest are just pet projects of the Democrats, like the humanities and the arts industry, like museums and the rest. We have a list here."

But Dingell's defense of the relief was again cut off.

"I don't want to see anybody go under!" Bartiromo yelled. "But people are going under because of the rules and regulations of the Democrat [sic] governors who will not allow these small businesses to open!"

"That's what's going to get this economy to open, not money for the arts!" the Fox Business host exclaimed over the objections of Dingell. "And money for the schools, where the teachers won't go back to work! What is stopping teachers from going back to work? Follow the science! Why aren't we following the science? Young kids are not necessarily vulnerable the way older Americans are vulnerable. How come teachers won't go back to work? They're getting billions more in this package! What is it going to take to get them back to work?"

"We can't make blanket statements," Dingell pleaded. "Each school district decides itself when the circumstances are right."

Bartiromo let loose with another rant about teachers.

"They will not go to work! They want all of this money! But where is the money going?" she bellowed. "Parents want to know. We've got parents watching right now!"

Before ending the interview, Bartiromo became incensed about why a bill that includes provisions for mail-in voting was named "H.R. 1."

"That's not the first bill that Nancy Pelosi has passed," Dingell said, observing that the COVID relief bill was passed first.

"But we just talked about the COVID bill," Dingell said.

"Then why is she naming the election -- why does she want mail-in ballots to stay forever?" Bartiromo snapped, referring to House Speaker Nancy Pelosi (D-CA). "And why is she using the election as her H.R. 1 then? How come COVID wasn't H.R. 1?"

"That bill already had a number," Dingell remarked.

"Because H.R. 1 was already a number assigned to election reform," Dingell said. "And by the way, what is wrong with having transparency? What is wrong with a mail-in ballot that lets somebody, who it's not easy to get out of the house and go vote, to vote?"

"I think we all know what's wrong with it!" Bartiromo asserted.

"I think we don't," Dingell disagreed.