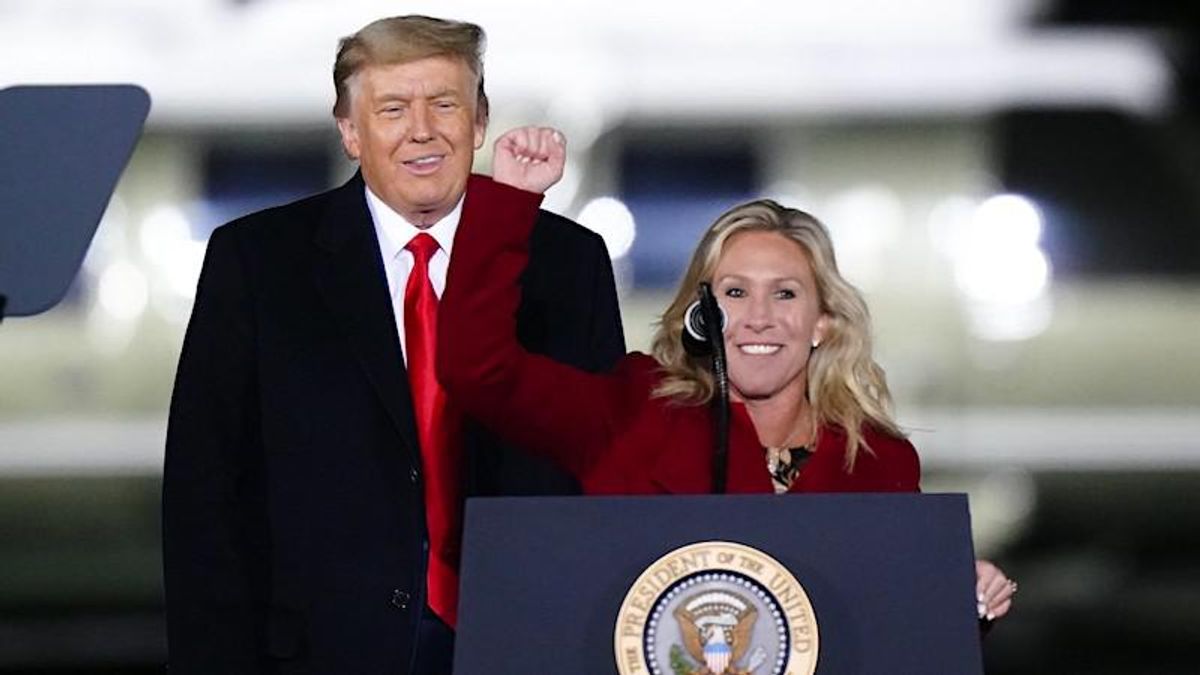 Georgia Republican Rep. Marjorie Taylor Greene faced a vote Thursday that could strip her of her committee assignments in the U.S. House of Representatives. It would be a sharp denunciation of a newly elected lawmaker who had embraced a wide range of dangerous and bigoted conspiracy theories and endorsed violence against politicians, such as House Speaker Nancy Pelosi.

Ahead of the vote, Greene delivered a speech trying to defend herself. But there was a key problem with it. Even as she sought to distance herself from some of the conspiracy theories she has spread in the past, she refused to take responsibility for spreading them and tried to downplay her participation in pushing these reckless fictions. It showed she hasn't grown at all as a person since she first dove into the dark world of right-wing lies disinformation.

She tried to claim the attacks on her statements were about "words of the past" that do not represent her. But she notably did not apologize for, for example, promoting anti-Semitic conspiracy theories, pushing for Pelosi's execution, attacking Muslim members of Congress as unfit to serve because of their religion, or harassing David Hogg, a survivor of the Parkland school schooting.

Instead, she just tried to turn the page on everything she's done while refusing to be held accountable. And she pretended that her past remarks and affiliations, which were widely known while she was running for Congress, had no influence on her campaign, even though she didn't denounce them at the time.

"School shootings are absolutely real," Greene said, referring to her previous efforts to cast doubts on such attacks. "I also want to tell you 9/11 absolutely happened."

She lashed out at what she called the "Russian collusion" conspiracy theory, trying to draw an equivalence between the pernicious and ridiculous QAnon cult and the investigation into former President Donald Trump and some of his associates. But the bipartisan Senate Intelligence Committee's own investigation, led by a Republican, found ample evidence to support the concerns that prompted the Russia probe, including the fact that Trump's own campaign chair has undisclosed meetings about polling data with a Russian spy during the 2016 campaign.

This undermined her claim that she had justification to distrust the media and go searching for other sources of information. And the false attacks on the Russia investigation itself are, indeed, a close cousin of the QAnon delusions themselves, as they play into the narrative that there was a deep state effort working to defeat Trump.

Her recent reactions to criticism of her history was also telling. When damning remarks and posts of hers were recently unearthed by CNN, Media Matters, and other outlets, she refused to apologize and instead lashed out. She wouldn't even confirm they were true and own up to her actions, even when reporters had video of her and screenshots of her posts. This is not the behavior of someone who has reformed but someone who is trying to benefit off her own perceived victimhood and further discredit accurate sources of information.

"Will we allow the media, that is just as guilty as QAnon, of presenting truth and lies to divide us?" she said on the House floor.

She even called QAnon a "mix of truth and a mix of lies" — leaving it up to the audience to wonder what part she thinks is true. Even here, it wasn't clear how much she was disavowing QAnon, or just saying that it has been mixed up with some falsehoods, which many believers could readily acknowledge.

This was all part of her refusal to accept responsibility for her own involvement and perpetuation of QAnon, which has ruined countless lives and fueled an insurrection. In a line that attracted a lot of ire, she seemed to place the blame for her role on others, saying: "I was allowed to believe things that weren't true. And I would ask questions about them, and I would talk about them. And that is absolutely what I regret."

She continued: "Because If it weren't for the Facebook posts or comments that I liked in 2018, I wouldn't be standing here today, and you couldn't point a finger and accuse me of anything wrong."

Not only did she not take responsibility for the harms her embrace of QAnon contributed, too, she indicated that her only regret is that her words can now be used against her.

"Later in 2018, when I started finding misinformation, lies, things that were not true in these QAnon posts were not true, I stopped believing it," she said. "So I walked away from those things."

Business Insider's Grace Panetta pointed out that this was misleading:

Again, covering up the true extent of her involvement in QAnon is not genuinely the actions of someone who shows remorse. And there's good reason to believe that, despite her present efforts to distance herself from QAnon, that she's still a close adherent.

Will Somner pointed out that as recently as December, she was writing favorably about QAnon on Twitter:

And on Jan. 4, the day she was sworn in as a member of Congress, two days before the Capitol attack, she wore a mask that said "Trump won." In fact, he hadn't won, though he was still promoting bogus claims about election fraud and trying to overturn the 2020 election. While many Republican supporters joined Trump in this effort to a disturbing extent, Greene's endorsement went even further than many of those who contested the election. Others tried to play both sides of the fence, raising vague or technical "concerns" about the election, but Greene's message was unambiguous: Trump had won. This delusional belief, promoted by the president himself, was also widely believed by the QAnon crowd and played into the deadly attack on Congress. So despite Greene's claim that she's being targeted for things she did before joining the House, her actions and comments are part of a dangerous pattern that continue to the present day.