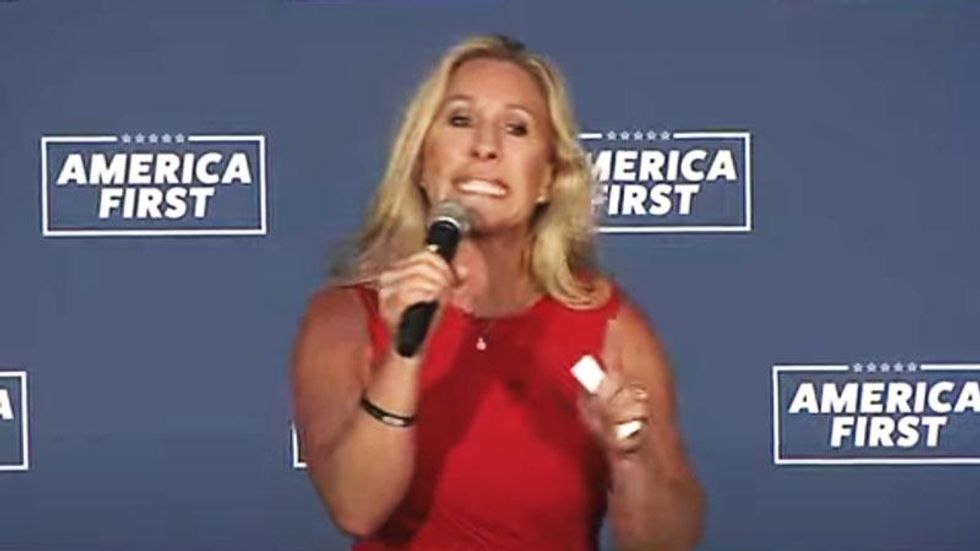 “You know, a lot of people are swallowing down the word ‘socialist,’ but that’s not a good enough word for Democrats – they are communists,” Greene told her supporters, clearly ignorant of the words’ meanings.

“That’s the word we need to keep using with them,” she continued. “Because they’re using these unprecedented, authoritarian, tyrannical controls on the American people to force people to comply.”

But Greene was singing a very different tune Friday afternoon.

“I have been the most attacked freshman Member of Congress probably in United States history,” Greene cried in a video she posted to social media. “The media has defamed me. They have completely smeared my character. Called me names and labeled me horrible things, none of which I am. None of the things they have said are true about me.”

What has been said about Congresswoman Greene in the legitimate media? Unlike her videos, there’s a high degree of likelihood it’s mostly true.

Here’s a portion of what The New York Times wrote in January:

Marjorie Taylor Greene had just finished questioning whether a plane really flew into the Pentagon on Sept. 11, 2001, and flatly stating that President Barack Obama was secretly Muslim when she paused to offer an aside implicating another former president in a crime.

“That’s another one of those Clinton murders,” Ms. Greene said, referring to John F. Kennedy Jr.’s death in a 1999 plane crash, suggesting that he had been assassinated because he was a potential rival to Hillary Clinton for a New York Senate seat.

Ms. Greene casually unfurled the cascade of dangerous and patently untrue conspiracy theories in a 40-minute video that was originally posted to YouTube in 2018. … Ms. Greene suggested in a 2018 Facebook post, unearthed this week by Media Matters, that a devastating wildfire that ravaged California was started by “a laser” beamed from space and controlled by a prominent Jewish banking family with connections to powerful Democrats.

She endorsed executing Democratic lawmakers, including Speaker Nancy Pelosi. She served as a prolific writer for a now-defunct conspiracy blog called “American Truth Seekers,” writing posts with headlines including “MUST READ — Democratic Party Involved With Child Sex, Satanism, and The Occult.” And she argued that the 2018 midterm elections — in which the first two Muslim women were elected to the House — were part of “an Islamic invasion of our government.”

Ms. Greene has repeatedly claimed in multiple videos and social media posts that several school shooting massacres were “false flag” events perpetrated by government officials in an attempt to drum up support for gun control laws. In an October 2020 video surfaced on Friday by Mother Jones, she said that the “only way you get your freedoms back is it’s earned with the price of blood.”

Ms. Greene is perhaps best known for having endorsed QAnon, the pro-Trump conspiracy movement that claims that Mr. Trump was facing down a shadowy cabal of Democratic pedophiles.

That was almost an entire year ago. You’re probably more familiar with all the baseless and unfounded attacks she has made since.

Greene has made lying about and attacking Democrats part of her weekly, if not daily routine. Sometimes those attacks have been very personal – and very close. Like when she followed Parkland shooting survivor and gun control activist David Hogg around the streets of D.C. He said he felt she was threatening him. Or more recently, when she verbally assaulted U.S. Rep. Alexandria Ocasio-Cortez on the steps of Congress. That was one of her countless attacks against the New York Democrat who Greene seems disturbingly obsessed with.

But if indeed Greene is the “most attacked” freshman member of Congress in all of U.S. history, she has only herself to blame.