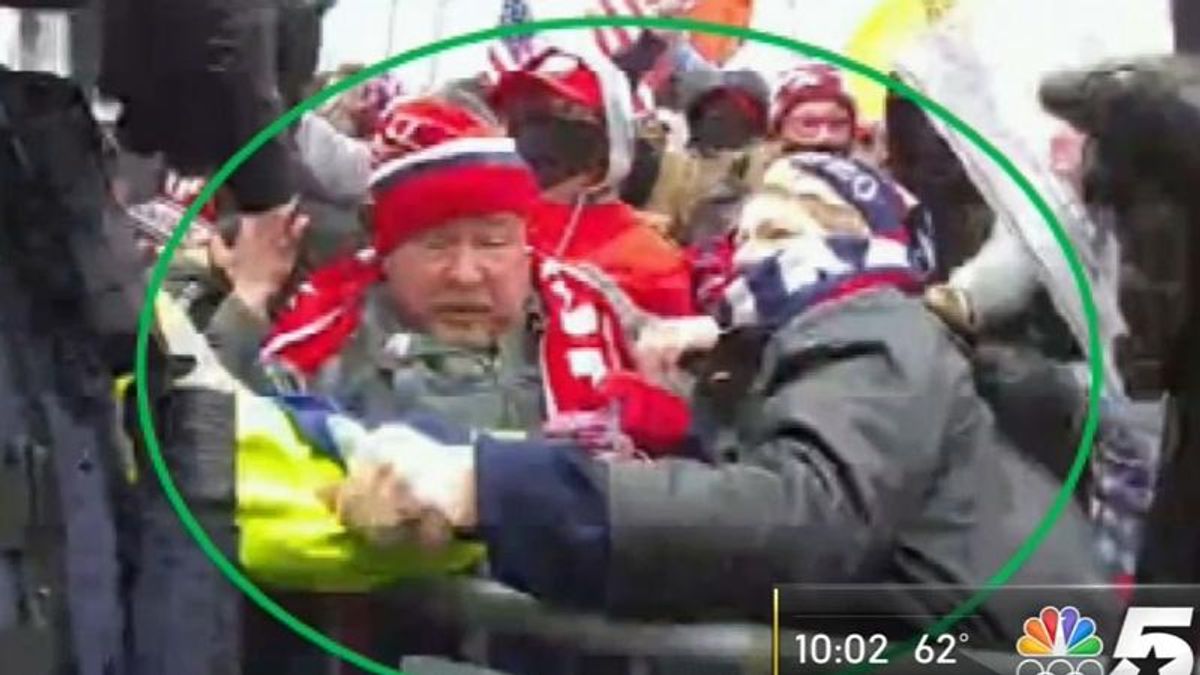 The Middletons, from Forestburg TX, are accused of having made a couples' activity out of assaulting officers on the front line of the Capitol insurrection. Here's some of the description from the FBI complaint, citing footage from police body cams:

"Officers begin struggling against rioters who are refusing repeated orders to step back from the barricade and are attempting to breach the police line. As the struggle ensues, a male individual wearing a red, white, and blue "Trump" beanie hat, red and white scarf, gray or silver jacket, blue jeans, red and white "Nike" shoes, and gray backpack with a red logo on the back—later identified as Mark Middleton— pushes against the barricades and the police line with his body. As officers repeatedly order (him) and other rioters to "get back," (he) is heard yelling "fuck you!" as he continues pushing against the barricade.

"Middleton struggles against the officers for more than thirty seconds... he grabs onto (an officer's) left hand or wrist and appears to pull (his) body forward, as Middleton reaches his other arm across the barricade toward (the officer).

"At the same time, a female individual wearing a red, white, and blue "Trump 2020" beanie hat, red, white, and blue scarf, gray jacket, red shirt, and gold ring with what appears to be diamonds—later identified as Jalise Middleton -- repeatedly grabs and strikes officers over the barricade with her hand."

Both Middletons are accused of striking and grappling with officers "as various flags are jabbed toward the officers' faces."

As now seems customary, the FBI was able to track the Middletons with the help of a live Facebook video posted by the husband. Here's some of what he had to announce to the world:

"We are on the front lines. We helped push down the barriers. Jalise and I got pepper sprayed, clubbed, and tear gassed. We had to retreat, but more patriots pushed forward, and they're taking back our house. They've got the giant flag up on the upper terrace up there. No more fooling around! Jalise and I gotta go back to the hotel and try to recoup and change, get dry clothes on. Make America great again! Freedom!"

Middleton helped corroborate the video with these January 6 and 7 posts, according to the FBI:

"I just got gassed by the Capital Police." (In response to being asked "Happy gas or the nasty kind?") "Nasty kind."

"I got tear gassed pepper sprayed and clubbed."

(In response to being asked "Did you really storm the capital?") "We did not. When we were on the steps no one was on the inside or on the upper balconies outside."

"I was there on the steps in this pic. Capital police insights this. The crowd was not agitated until CP started tear gassing, pepper spraying and clubbing people."

"Also. Those that caused damage were NOT patriots. Yea patriots did enter the capital. I have seen private video. But we also had infiltrators."

"We left the hotel at 6:30am and didn't get back till 6:00pm. Do not believe the news media, we're not rioters or mobs. There are close to a million people here today, if not MORE. People swarmed D.C from all across the nation, of all ages, races and backgrounds. If we intended to start a riot, there wouldn't be a building left, just saying. Yet, not one building is burned, not one store looted, not one police car set on fire! Listening to the Congress makes my blood boil, they're playing the victim cards. They blame Trump for today because they're afraid, because earlier this morning Trump reminded them that people will remember them by their action today or we will start a new party. Trump represented us but he, moved their cheese, the stinky politicians. Afterwards, patriots marched all the way to the Capitol, chanting and singing the national anthem. The atmosphere makes you feel proud to be an American, ask anyone that was there, I guarantee you that's what every single person will tell you. As we approached and gathered at the back of the Capitol, even after people occupied the high and low grounds, national anthem, Pledge of Allegiance, chantings for Trump, USA and singing of patriotic songs, singing hymns and praying are all that you hear. Then came the tear gas. I'm not going to comment much on that, the metro police might've felt threatened, or received orders, I don't know. Tear gas frequency increased as it got closer to the curfew (which was enacted at 3pm today). That infuriated many of us. We've been the ones supporting the police, backing the police, but this is how we're being treated? Nonetheless, we started dispersing. Most people made their ways back to the hotel. Again, NO burning or looting. Simply making our ways back to the hotels. You CAN'T convince me there was no voter fraud found when I stood on the street for 20mins and still couldn't see the end of the crowd!"

And there was from Mrs. Middleton:

"We fought the cops to get in the Capital and got pepper sprayed and beat but by gosh the patriots got in!"

"(In response to the question "Are you safe?") "Ya we were the first group to storm the capital. Just bruised and pepper sprayed"

(In response to the question "Are ya'll okay?"] "Yes but we made history and got everyone in"

(In response to the question "Why did they fight the cops?"] "To get in the Capital to send them bastards a clear message that this won't be tolerated."

"We didn't make it in. We got pepper sprayed while fighting on front line. The best couldn't be documented because we were all hands on deck"

"Patriots busted through barrierers (sic) to get in Capital (sic). Best I know, there was no "looting or rioting ". We just sent a warning that we are serious. They did break windows to get in, but we're not tearing anything up. It is simply a notification that we can get to you, we mean business, do what's right! Patriots don't stoop low like Antifa."

Here's some additional reporting from the NBC-TV affiliate in Dallas:

"According to her LinkedIn page, Jalise Middleton, 50, is a billing manager for Angels Care Home Health in Gainesville and graduated from Arlington High School. She moderated a Parkinson's support group, according to the Gainesville Register.

"Mark Middleton, 51, a volunteer firefighter and pilot, worked at Nortex Communications, an internet service provider in Muenster, and has a master's degree in theology from Liberty University, according to his LinkedIn.

"A spokesman for Nortex Communications said Mark Middleton started at the company in October selling broadband services and was no longer employed as of Thursday.

"A representative from Angels Care Home Health did not return a call seeking comment.

"The Middletons are the 21st and 22nd alleged U.S. Capitol rioters to be arrested by the Dallas office of the FBI, which covers the northern half of Texas."

You can read the full complaint here.