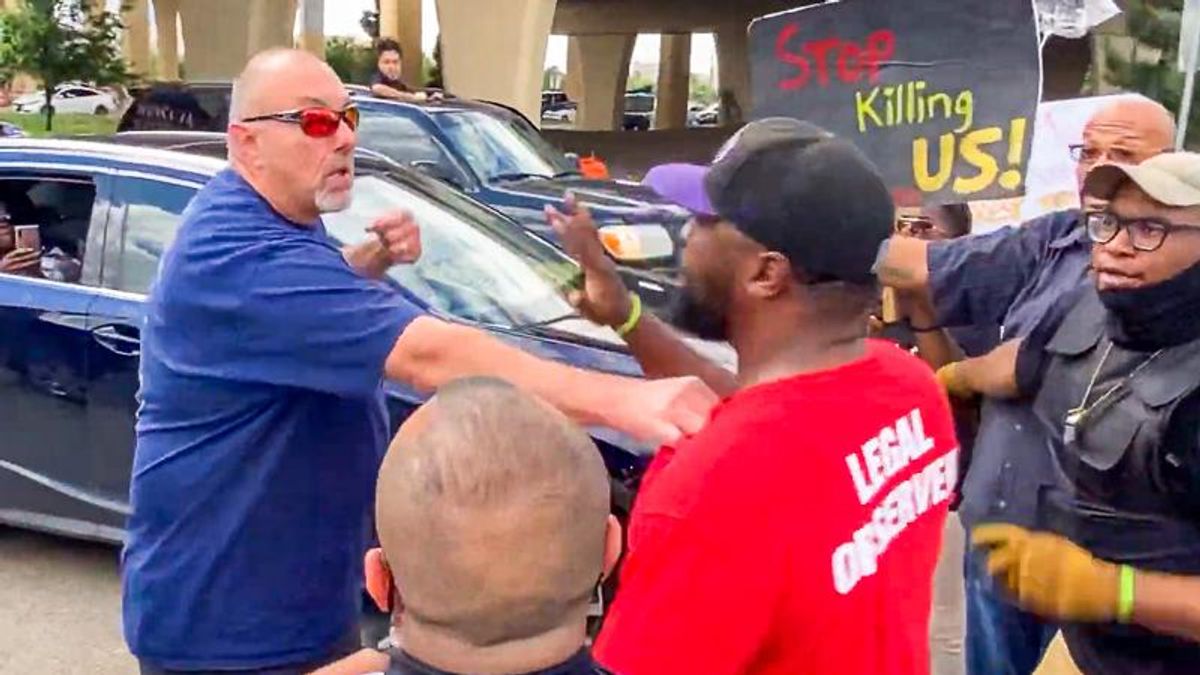 An angry white man was caught on video attacking Black Lives Matter protesters in Texas over the weekend.

The incident was said to have occurred in Frisco, Texas after demonstrators stopped traffic while protesting the death of Marvin Scott III. The Collin County medical examiner recently said that Scott's death was a homicide that occurred "during restraint struggle with law enforcement."

Video shared online shows the white man yelling at protesters in the street before he approaches a Plano police officer and demands action.

"Get these fucking people out of the way!" the man shouts at the officer before turning to take a swing at a protester.

The man can then be seen putting his hand on a legal observer while threatening to punch him.

The officer on the scene then asks the man to leave.

"Get them out of here!" the angry man demands before being allowed to walk away.

Organizers called for answers from the Plano Police Department.

"The officer witnessed this man's aggression, saw him smack a protestor's phone/hand, saw him shove another (Lee Merritt in red shirt), and is confronting him while man is cocked and ready to throw yet another punch," one of the organizers explained on Twitter. "Notice how many times the officer's hands go near his taser or weapon.........zero. This man towered over the officer. Why wasn't he ever afraid? Why didn't he immediately feel the need to control him?"

Ask why Ofc. Jemil allowed this insane man to leave after witnessing his assault on protestors. Ask him why the ofc never felt the need to put his hands anywhere near his taser or gun.
— Official Justice for Marvin (@MarvinDScottIII) May 3, 2021

Notice how many times the officer's hands go near his taser or weapon.........zero. This man towered over the officer. Why wasn't he ever afraid? Why didn't he immediately feel the need to control him? #systemic #JusticeForMarvin #MARVINSCOTTIII pic.twitter.com/UItbs0PjWC
— Official Justice for Marvin (@MarvinDScottIII) May 3, 2021