Matt Gaetz is so politically toxic that even Sean Hannity has seemingly 'abandoned' him: report 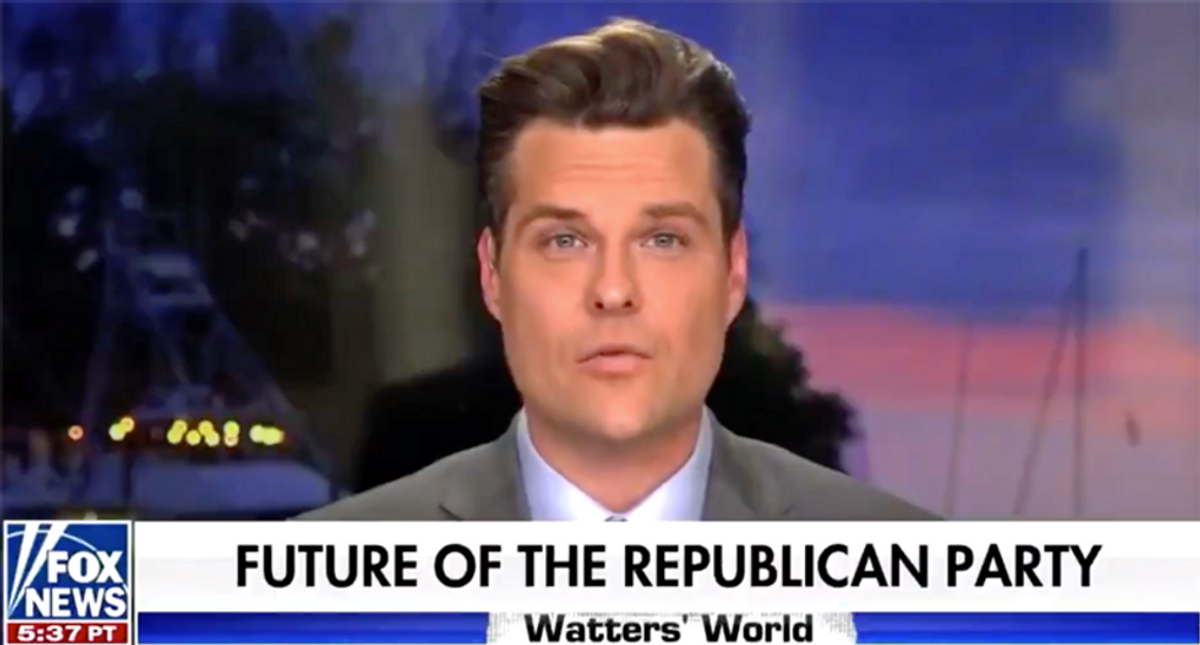 Fox News' Sean Hannity has been a bombastic supporter of Rep. Matt Gaetz of Florida, but with the U.S. Department of Justice investigating allegations that Gaetz was sexually involved with a 17-year-old girl, many Republicans are distancing themselves from the far-right Republican congressman. And according to April 7 analysis by Media Matters reporters Matt Gertz and Eric Hananoki, even Hannity — along with others at Fox News — has seemingly "abandoned" the 38-year-old Gaetz.

Gertz and Hananoki explain, "Rep. Matt Gaetz (R-FL) owes his political rise to Fox News. Politicians gain power in the modern GOP by grabbing and holding the attention of the base, and the easiest way to do that is through its most trusted media outlet…. It seems, however, that Fox has now abandoned Gaetz at his moment of greatest need."

According to the Media Matters reporters, "Fox devoted a mere 45 minutes to the Gaetz saga through Tuesday — and nearly three-quarters of that coverage came in the first 24 hours, with the network providing sparse coverage of subsequent revelations."

"Perhaps the most notable absence from Gaetz's defense is prime-time host Sean Hannity," Gertz and Hananoki write. "Even as Gaetz responded to the allegations by spinning the sort of convoluted tale of Deep State conspiracy and right-wing victimhood that seems tailor-made for Hannity's program, the Fox star has seemingly left him for dead."

Ignoring the 38-year-old Gaetz, Gertz and Hananoki stress, is a major departure for Hannity.

"Gaetz is a 'Hannity' fixture," according to the Media Matters reporters. "Since August 2017, he made 127 appearances on the program, roughly 41% of the 310 interviews he gave the network overall…. according to Media Matters' database of weekday programming. Gaetz is the 11th most-frequent 'Hannity' guest over that period, and ranks second to Sen. Lindsay Graham (R-SC) among guests who have not served as paid Fox contributors."

After serving in the Florida House of Representatives for more than half a decade, Gaetz was first elected to the U.S. House of Representatives in 2016 — and he was reelected in 2018 and 2020. Gaetz has been an aggressive supporter of former President Donald Trump, and he hasn't been shy about attacking other Republicans for being insufficiently Trumpian.

But according to New York Times reporter Maggie Haberman, Gaetz has become so politically toxic that Trump's staff is imploring him to steer clear of the congressman. During an April 7 appearance on CNN's "New Day," Haberman told hosts Alisyn Camerota and John Berman, "So far, they have been successful in keeping him away from him…. Trump personally likes him; Trump's staff has always had issues with him."

Gertz and Hananoki note that Hannity promoted Gaetz's 2018 campaign. During a speech at a July 2, 2018 campaign event in Pensacola, Florida, Gaetz told supporters, "Sean Hannity gives me a platform almost every night to get out there and tell it like it is. And I thank him for that."