A New Jersey elementary school is under fire after a teacher allowed a students to write a biography that allegedly glorified Adolf Hitler, ABC7 reports.

The finished assignment, which the students dressed up as Hitler for, was reportedly hung in the hallways of Maugham Elementary School in Tenafly for weeks. Now the school is investigating. Local leaders and residents are calling on the board of education to conduct a full investigation as well.

"It's appalling, it should've been stopped the minute this girl came to school," said one resident.

According to Tenafly Councilwoman Lauren Kohn Dayton, the "inquisitive child wanted to learn more about the Holocaust."

"When discussing our history and social injustice in the fifth grade, the Holocaust is an important topic to discuss and learn, and this student was given permission to do so," Dayton said. "The child stuck to the requirements of a school assignment. The child had NO intention to be anti-Semitic, offensive or hateful towards our Jewish community. I personally know this child and her family, and I would welcome them into my Jewish home anytime. If we are to have a conversation about appropriate school assignments, teaching, or teacher guidance for our children, then let's talk to the school. But please remember that this is an elementary school child, and the child's mental health and well-being must be protected." 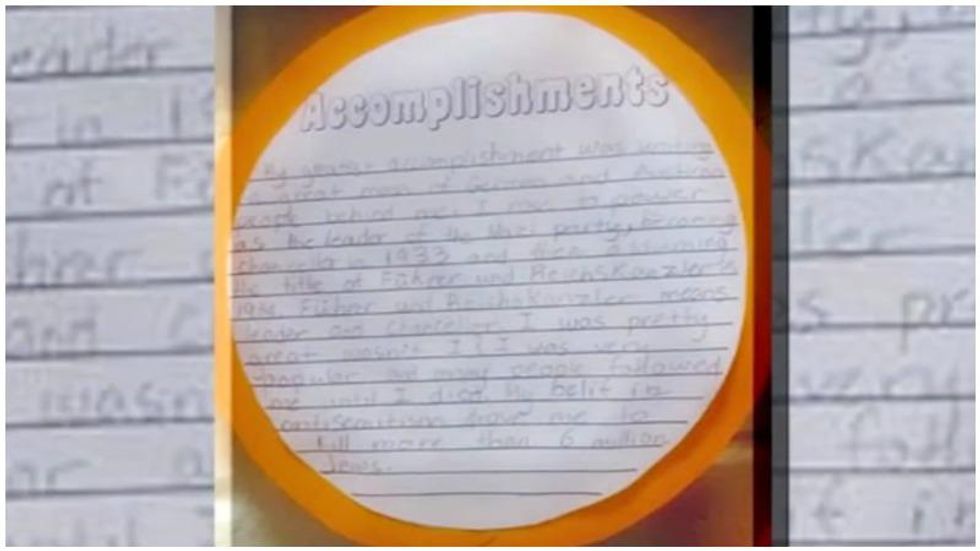 The board of education said the whole thing was a misunderstanding.

"The assignment, which was given by a teacher who happens to be Jewish, asked students to speak from the perspective of one of these individuals and how they might have perceived and rationalized their actions," a statement from the board read. "When people saw the students' projects, which were displayed in the school, they did not understand the assignment, resulting in justifiable concerns.""

But the outrage from the community and some Jewish leaders is palpable.

"This incident further illustrates the need for increased awareness in our community about the harmful impact our words and actions can have on others," read a statement from Kaplen JCC on the Palisades, a Jewish Community Center in Tenafly. "Regardless of the educational intent here the teacher failed to recognize the profound impact this can have on students, family members and others in our community who could perceive this project as condoning or even glorifying the atrocities of one of the most evil individuals in world history."

Watch a report on the story from ABC7 below: