WATCH: Merrick Garland shuts down Republican trying to get him to say another Biden nominee is anti-Semitic 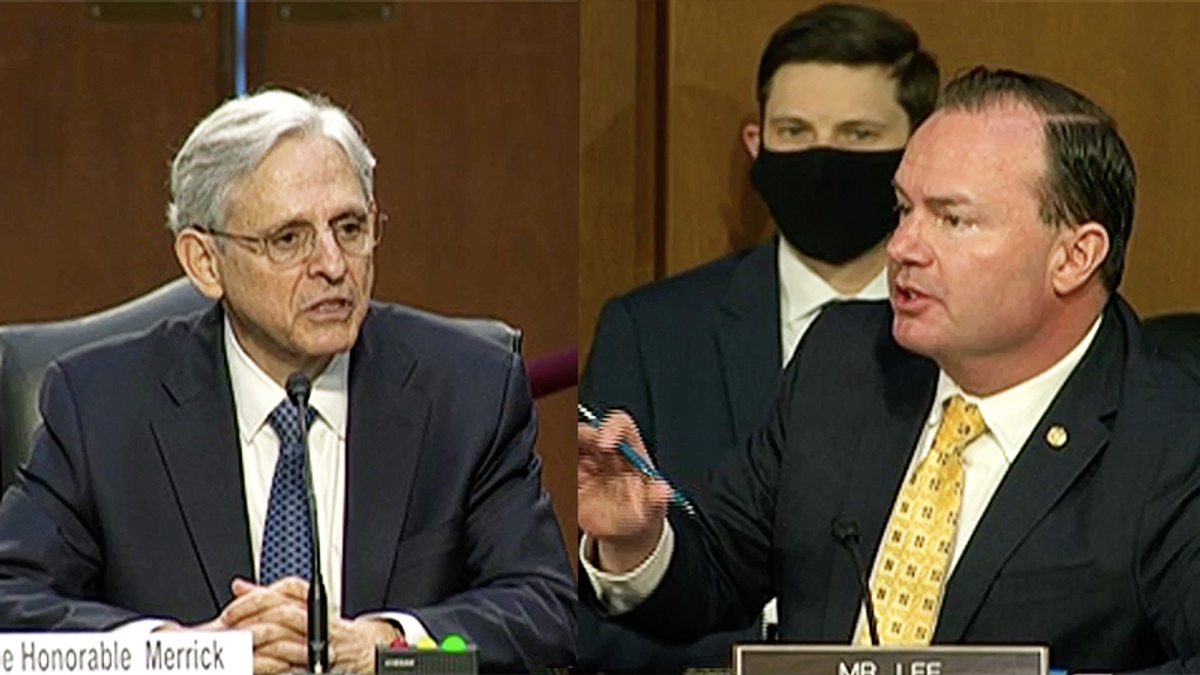 Merrick Garland was raised a conservative Jew. On Monday, Sen. Mike Lee (R-UT), a Mormon, asked him during his Senate confirmation hearing about alleged anti-Semitism from another one of President Joe Biden's nominees.

"Do you believe Republicans of the United States as a whole are determined to 'leave our communities to the mercy of people and institutions driven by hate, bigotry, and fear of any threat to the status quo?'" asked Lee, misquoting and mischaracterizing an editorial by Vanita Gupta.

"The reason I raise these -- these are questions drawn from comments made by Vanita Gupta, who's been nominated to be associate attorney general, has advocated for each of these sessions," said Lee.

"Well, I know Vanita Gupta quite well -- I did not know her before but since the nomination, I've gotten to know her, to talk with her, and I can tell you I regard her as a person of great integrity and a person dedicated to the mission of the department, particularly equal justice under the law."

"I'm not asking you to weigh in on her as a person, I'm just talking but the comments," said Lee. "Let's move on. Would an individual's past statements — statements in the past as an adult declaring one racial group is superior to another, with statements like that be relevant to an evaluation of whether such a person should be put in charge of running the Department of Justice's Civil Rights division?"

"So, Senator, I have read in the last few days these allegations about Kristen Clarke, who I have also gotten to know, who I also trust, who is a person of integrity, whose views about Civil Rights Division," Garland continued. "I have discussed with her and they are in line with my own. I have every reason to want her. She is an experienced former blind prosecutor of hate crimes and we need some of you to be running --"

Lee interrupted Garland, saying that he was "asking about the statement, not her as a person. I'm asking about the statement." Lee never cited the "statement" that he was concerned about, though he's likely referring to a Tucker Carlson comment on Fox News that mischaracterized a 1994 article in the Harvard Crimson in which Clarke and others wrote a "response to those who defend The Bell Curve:" Intelligence and Class Structure in American Life by Richard J. Herrnstein and Charles Murray. Clarke disputes the idea that intelligence can be linked to class and race, a claim The Bell Curve makes, a Newsweek fact-check revealed.

"What — in the abstract, would someone who has made that comment, with that comment be relevant to whether that person, having made that statement, should be put in charge of running the civil rights division?" Lee asked about Clarke.

"All I can tell you is I have had many conversations with her about her views about the Civil Rights Division and what kind of matters would --" Garland said before Lee cut him off again.

"What about anti-Semitic quotes?" Lee said.

An exasperated Garland said, "You know my views on anti-Semitism. No one needs to question those."

"I know you're not, but I also want you to know I'm also a pretty good judge of what an anti-Semite is," Garland said. "I do not believe she is discriminatory in any sense."

See the moment below: