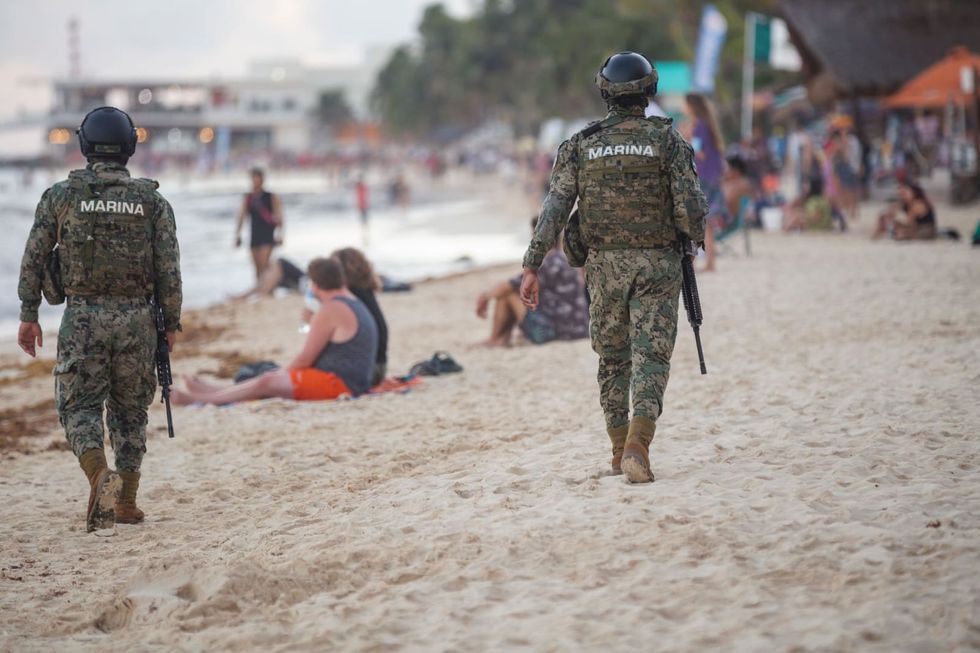 Tourists find the coconut palms and coral reefs irresistible plus there are the pyramids nearby.

Mexico's Caribbean coast is a paradise for holidaymakers but recent shootings have clouded the appeal, with several tourists killed in the crossfire.

Video footage from a surveillance camera showed them running between the palm huts of a hotel, carrying rapid-fire rifles. They gunned down two drug dealers, then fled in speedboats.

Tourists and hotel staff sheltered in the hotel as the shots rang out.

They were lucky. Two weeks earlier, a German tourist and a travel blogger from India were killed in Tulum, a fashionable resort.

They were eating at different tables in the La Malquerida bar when the shooting began. Drug dealers chased a man and a gun battle broke out. He returned fire after hiding in the bar.

Later, the police found 25 cartridge cases at the scene.

Two other Germans and a Dutch woman were injured.

"We have a high level of demand and a large supply of drugs," Quintana Roo state Attorney General Óscar Montes de Oca told the Televisa channel. "That is what leads to this violence."

Major drug cartels and local gangs fight over drug transshipment points and extortion money that small and large businesses alike are forced to pay - including taxi drivers and street vendors.

Recently, the Argentinian manager of the Mamita's beach club in Playa del Carmen was killed for reasons that remain unclear.

There are also international criminal groups in the neighbourhood. Two Canadians were killed in a hotel in Xcaret near Playa del Carmen in late January. They were involved in international crime and drug trafficking, investigators say, and were shot by a hitman in a dispute about debts.

This is seriously worrying for local hotel and restaurant owners. Meanwhile the US State Department and other governments have advised tourists to take care, warnings that are bad news for a region that lives off tourism.

Such attacks have a special "resonance in the media," even if crime rates in general are falling in the state, Governor Carlos Joaquín told the Fórmula radio station.

Millions of holidaymakers flock to Mexico's most famous resorts on the north-eastern Yucatán peninsula every year and that flow did not stop even during the pandemic.

Mexico maintains an open-door policy, requiring neither tests nor proof of vaccination for people to enter the country.

But drugs are big business. In Cancún alone, drug trafficking is worth around $4.8 million annually, the Reforma newspaper reported, citing security sources.

"There have always been drug trafficking and prostitution in Quintana Roo. Tourism is untouchable here. There is no control," Azucena García told dpa.

García, a biologist by profession, is a member of citizens' initiative Observatory for Public Safety and Gender Equality in Quintana Roo.

Her concerns include unsustainable development of tourism which is having a negative effect on people and the environment.

One hotel after the next has sprung up along Tulum's sandy beach in recent years, many marketed as eco-chic. Meanwhile the nearby mangroves have been destroyed, the groundwater is polluted and the jungle is openly used as a dumping ground.

Nowadays, more soldiers are patrolling the beaches, members of a special unit of the National Guard set up by President Andrés Manuel López Obrador to protect visitors.

The Quintana Roo state government also wants to work with the US Federal Bureau of Investigation, the US Drug Enforcement Administration and the Canadian police on security issues.

Nonetheless, they are also expecting more tourists to come soon, with a new airport set to open in Tulum and the Maya Train to start operations in late 2023.