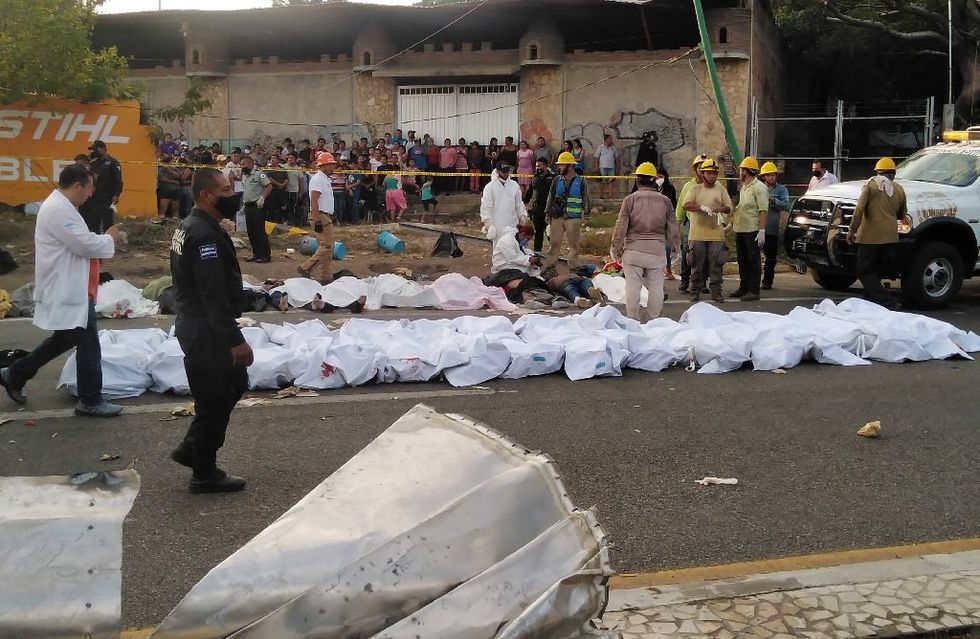 Tuxtla Gutiérrez (Mexico) (AFP) - Mexico on Friday urged Washington to rethink its migration policy after a horror road accident killed 55 undocumented migrants in a truck on a major transit route to the United States.

Bodies draped in white sheets lined the roadside near Tuxtla Gutierrez in the southern Mexican state of Chiapas, where a truck transporting some 160 migrants -- most from Central America -- overturned Thursday.

Passengers, bleeding and with broken bones, lay in the road crying out in pain after the latest disaster to befall desperate people traveling through Mexico in search of a better life in the United States.

More than 100 people were injured.

Thousands attempt the long, often dangerous, and expensive journey every year to escape violence and poverty in their home nations in South and Central America.

"The migration problem cannot be solved by coercive measures, but by opportunities for work and well-being. People don't leave their villages for pleasure, they do it out of necessity," he said.

If the United States wanted to prevent migration to its shores, added Lopez Obrador, it should invest in social programs in Central America -- a matter he has discussed with Joe Biden.

But "there is slowness," said the Mexican leader.

The victims of Thursday's accident, authorities said, were from Guatemala, Honduras, Ecuador, the Dominican Republic and Mexico.

Most of the dead were from Guatemala, said Lopez Obrador.

"It was horrible to hear the wailing. I just thought about helping," 18-year-old Sabina Lopez, who lives nearby, told AFP.

The driver, who fled the scene, was allegedly speeding when he lost control of the truck.

The National Institute of Migration said it was working to identify the dead, pay for funerals and repatriate bodies. It said survivors will be allowed to stay in Mexico.

The death toll is likely to rise, with many of the injured taken to hospital in a serious condition, according to Luis Manuel Garcia, a local civil protection official.

Lopez told AFP she saw a man pleading with his wounded companion.

"Don't go to sleep, don't close your eyes," she recalled him saying. "Remember what you promised your mother! Hold on."

Selvin Lanuza, who left Guatemala hoping for a better life, boarded the truck minutes before the accident.

"I remember the screaming of the people when the trailer overturned -- and nothing else, just screaming. The people from the nearby houses helped us," the 18-year-old told AFP from a Red Cross facility where he was being treated for minor injuries.

Isaias Diaz, a nearby resident who arrived 15 minutes after the incident, described a ghastly scene, with "a lot of people lying around, some of them were already dead."

Diaz said he saw "five, six children, injured ... People (who had) broken legs, ribs, heads, cuts on their necks, everything."

"The crying, the pain, the desperation. It was a very ugly atmosphere," he said.

Another local, Emmanuel Hernandez, 43, said the aftermath was horrendous.

"The bodies were like demons, with the skulls protruding, most of them deformed," he said.

People came spontaneously from nearby settlements Friday to place candles at the accident site and pray.

"Our hearts are broken," said Rocio Hernandez, a 52-year-old housewife.

The Attorney General's Office has opened a homicide investigation, while government officials denied the truck had been allowed through a roadblock before the crash.

Guatemalan authorities declared three days of national mourning, and the Vatican expressed condolences to the victims and their loved ones.

"Migratory alternatives and legal avenues are needed to avoid tragedies like this," the United Nations High Commissioner for Refugees (UNHCR) tweeted.

Human traffickers commonly hide undocumented migrants in trucks bringing them from Guatemala into Mexico, from where they head north to the US border. Accidents are common.

Migrants have told AFP that the truck journey entails hours locked up without ventilation, avoiding drinking water so as not to have to urinate. Drivers, they say, ignore pleas for fresh air.

Faced with these dangers, many migrants opt instead to join so-called caravans undertaking the long journey on foot, enduring extreme weather and other hardships, including extortion from drug gangs.

The flow of undocumented migrants has increase since Biden came to office with a promise to scrap the hardline border policies of his predecessor Donald Trump.

Mexican authorities have detected more than 190,000 migrants between January and September, three times as many as in 2020. Some 74,300 have been deported.

The United States recorded a high of 1.7 million people entering illegally from Mexico between October 2020 and September. Many were expelled.