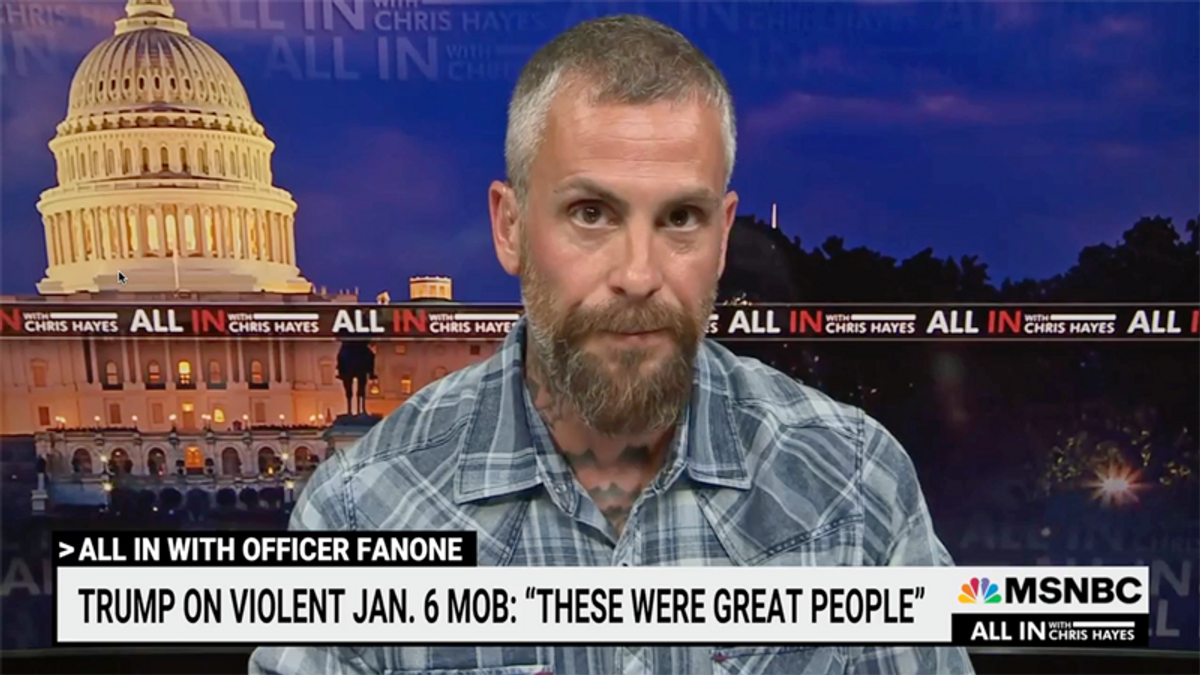 D.C. Metro Police Officer Michael Fanone had harsh words for how Republicans are treating the January 6th insurrection at the U.S. Capitol.

Fanone, who is still out on medical leave following the injuries he sustained in the attack, was interviewed by MSNBC's Chris Hayes.

"What do you think when you hear people say it wasn't an insurrection?"

"I think it's bullsh*t," he replied. "Listen man, I'm just a simple police officer and I look at things, you know, I go off of simple definitions. Things like violence for political purposes — which is exactly what the event that occurred at the Capitol on January 6th was. I was there, I witnessed it first-hand. It was a politically motivated, violent event — violent attack on the U.S. Capitol."

Fanone, who said he considers himself an independent, revealed he voted for Donald Trump in 2016.

The host played a clip of Trump claiming, "there was also a love fest between the police, the Capitol Police and the people that walked down to the Capitol."

"Yeah, I mean, again, that's a lie," Fanone said. "You know, Donald Trump's description of January 6th, pretty much every portion of that statement is a lie. You know, that was not what I experienced. What I experienced was, you know, incredibly brutal hand-to-hand combat."

Hayes asked Fanone about what could happen if Trump gets his wish and the officer who fatally shot MAGA rioter Ashli Babbitt had their name revealed to the public.

"I'm not going to speculate on those things," he replied. "But I don't think, like anyone that is watching the program or understands the way that that rhetoric is being utilized. I mean, it's no stretch of the imagination as to what that particular officer could be potentially in for would his name or her name be released."

"When I listen to those statements, you know, by people like the congressman, [Paul] Gosar (R-A) and Donald Trump, I mean, it's just insanity — absolute insanity," Fanone said. "You know, what happened to Ashli Babbitt was a tragedy. You know, anytime someone's life is taken violently, it's a tragedy. But the reality is that she was participating in a violent insurrection at the U.S. Capitol and that officer had a responsibility and an oath to uphold and he did so as the Justice Department stated, fulfilled that oath by protecting his own life and other members of Congress' lives that day."