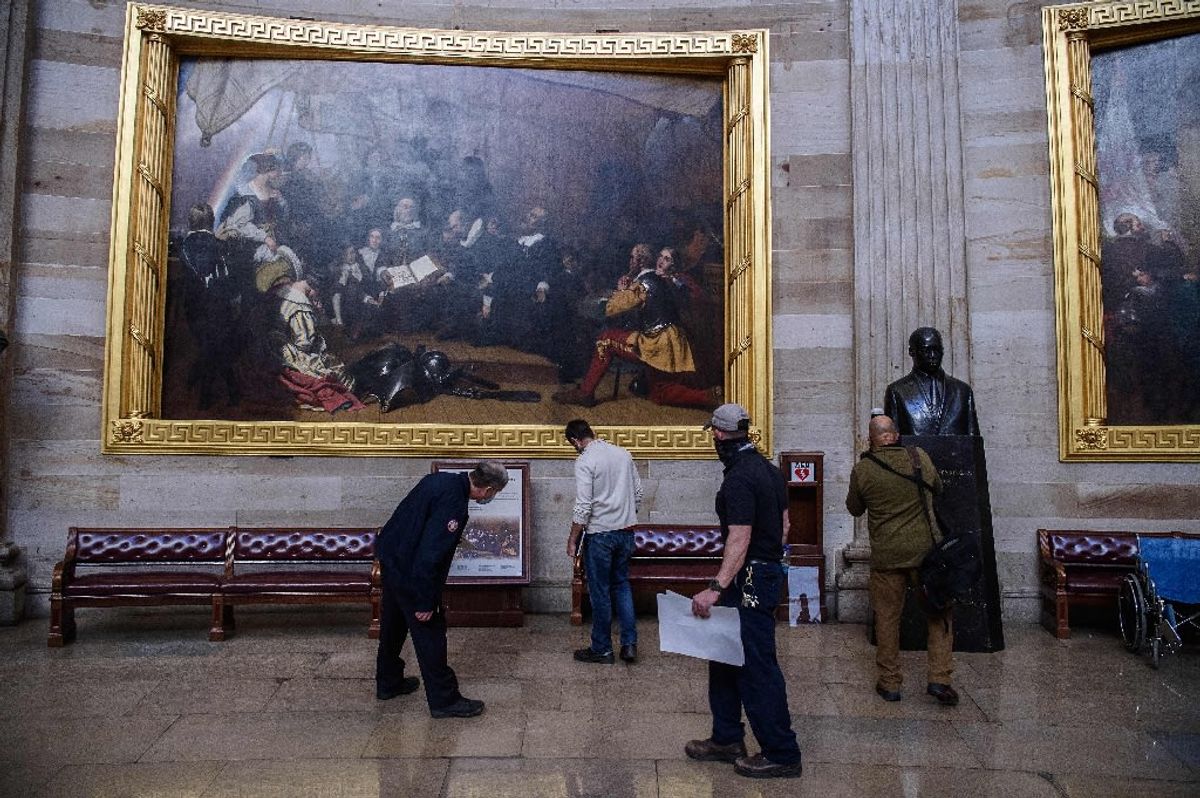 Anthony Robert Williams of suburban Detroit described participating in the January 6 Capitol riot as "the proudest moment of my life." Today, the FBI announced charges today against William in connection with his big day.

Like so many of his fellow rioters, Williams, 45, posted Facebook videos on the assumption they would vanish were he sly enough to delete them. Acting on an online tip, the FBI disproved that theory.

"In the videos, among other things, Williams discussed his success in entering the building, saying "desperate times call for desperate measures." He also poses next to and around statues and in other areas of the Capitol.

"In a second video taken outside of the Capitol, Williams discusses how he and others "stormed" the Capitol and "pushed back the cops." He also discussed that the police used pepper spray. Williams claimed that ". . . we took this fucking building." A still shot of that video is below. The pictures and videos appear to have been taken using a device carried by Williams."

That description fits a lot of Capitol insurrectionists. But Williams -- identified as a painter by the Detroit News -- also inadvertently contributed this tidbit to the culture war: His email account is tellingly tagged vango@yahoo.com.

But what screams "I love Trump!" better than a painter referring to himself as Vango?

The FBI didn't pursue that angle, but did note Williams' loyalty to his dear leader.

"Facebook returns yielded several posts below indicating Williams' intent to travel to Washington D.C. to "storm the swamp", stating "yep, we pissed and we coming to Congress" and to "[b]e prepared to #FightBack."

"Every lie will be revealed. 'Americans' who participated in fraudulent scheme to overthrow our duly elected President are TRAITORS. China orchestrated the attack and will pay severely for their transgression. American (sic) is a nation under a just God. Be prepared to #FightBack #HOLDTHELINE #Trump2020 #NoRetreatNoSurrender."

Eight days before the riot, Williams declared "Yep, we pissed and we comin to Congress."

Three days after the riot, there was this post, the evocative Facebook equivalent of a Vango, if you will:

"Operation Swamp Storm Veteran now lol modern day tea party. Was proudest day of my life lol felt like the founding fathers were smiling down on us in that room, and I guarantee my dad and gramps, both vets, would be proud."