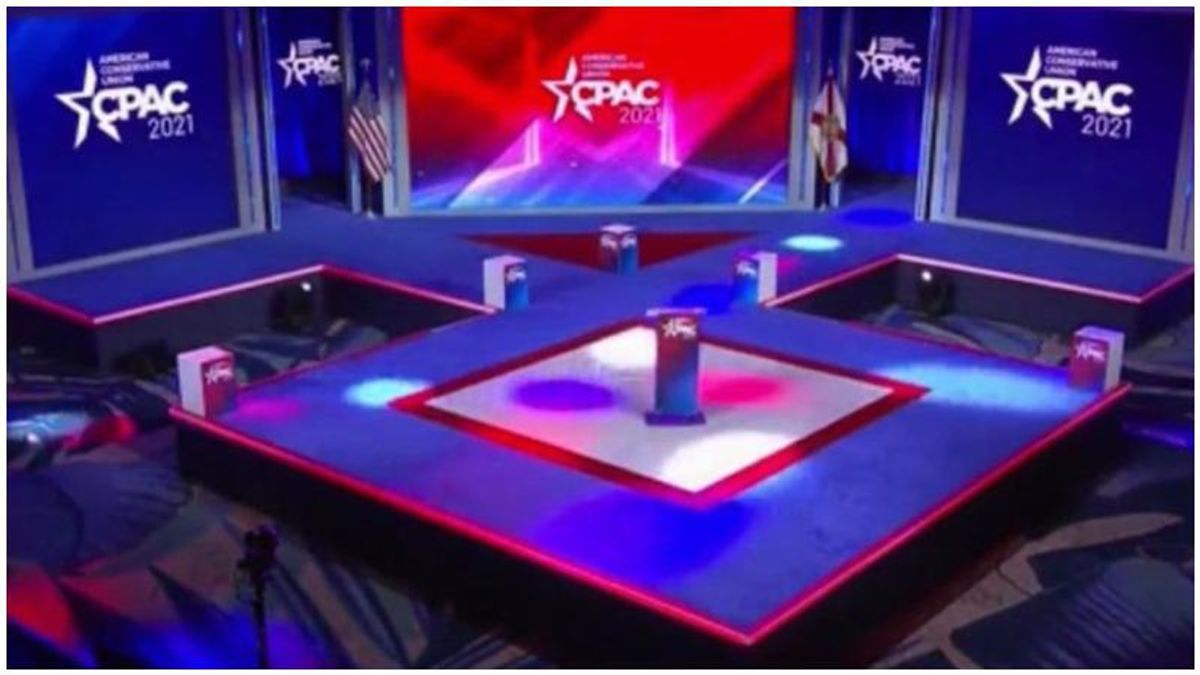 The stage began to go viral on social media once people saw the resemblance to the Odal or "Othala" Rune, a symbol that goes back to the third century. Immediately, a conspiracy theory began to circulate that assumed the stage's design was intentional and was meant as a secret nod to white supremacists.

I call bullsh-t on @Hyatt hotels. The chance to take your stand was while this stage was in use. Hyatt chose to let it go and in doing so has permanently lost my business. https://t.co/p2prXFAcl0
— Fred Guttenberg (@fred_guttenberg) March 1, 2021

The #CPAC stage is designed to be a rune used by the Nazis. Curious if @Hyatt is okay with Nazi symbols being used on their properties like this? pic.twitter.com/D0332vKKoN
— Morgan J. Freeman (@mjfree) February 27, 2021

Hey @Hyatt: you cool with @CPAC building a Nazi symbol stage in your hotel?

Because it seems like you're cool with @CPAC building a Nazi symbol stage in your hotel?

So you know, YOU SHOULD NOT BE COOL WITH @CPAC BUILDING A NAZI SYMBOL STAGE IN YOUR HOTEL. pic.twitter.com/n3bmZgPGM0
— Steve Hofstetter (@SteveHofstetter) February 27, 2021

According to journalist Yashar Ali, Design Foundry worked on many events in D.C. for companies like MSNBC and Target. He also pointed out that the company oversaw the design for the Biden Cancer Summit in 2018.

"The owner, Annie, is very liberal and was so excited for Biden's victory," Ali tweeted this Tuesday. "Great work conspiracy theorists."

Design Foundry told The Forward that the American Conservative Union (ACU) approved the design, which was "intended to provide the best use of space, given the constraints of the ballroom and social distancing requirements."

The terms of the contract signed with Design Foundry said that the ACU had no rights to change the design or dismantle the stage once it was finalized. "The designs, renderings, drawings, specifications, materials and other documents used or created as part of the proposal are owned by Design Foundry."

Ian Walters, director of communications for the ACU and CPAC, told the Forward that the company "provided several options for us to choose from and what we ended up with was the most workable of the options they submitted."

In a statement, Design Foundry said it was "saddened and horrified at the accusations that this was a deliberate act. Design Foundry denounces all hate speech and acts of racism, prejudice, or bigotry in all forms."