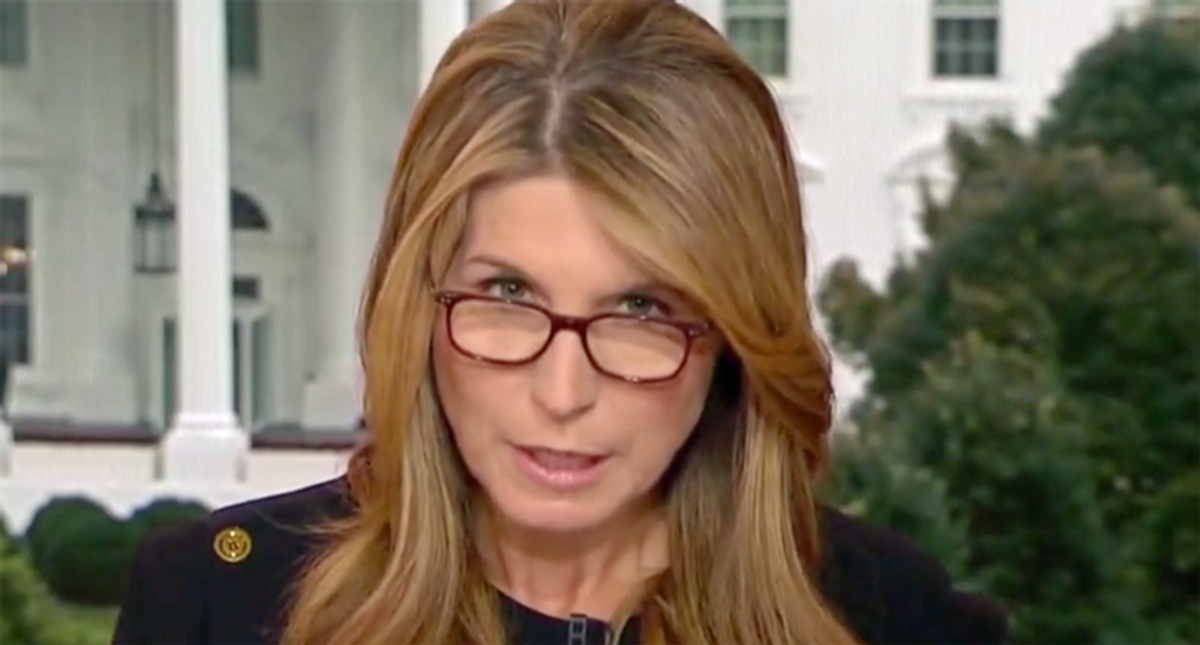 MSNBC host Nicolle Wallace was once a well-known Republican staffer for President George W. Bush. She then worked on Sen. John McCain's presidential campaign, but since Donald Trump took over her party, she's defected. Now she's arguing that it isn't exactly Trump that is the problem anymore.

"You know, Michael Steele," Wallace said to the former Republican Party chairman, "I just want to put this out there because I hear this, 'why can't we let Trump go?' I let Trump go. It was the happiest day of my life. But the damage that he's done to our country and the fact that he's turned the party into an anti-democratic movement is irreparable, and it's harm that's already done and potentially catastrophic in the damage it could do in the future."

She cited a recent column from conservative Washington Post writer Max Boot, who explained that people are still underestimating Trump even after his downfall.

"But while Trump is not a serious person, he is a serious threat to our democracy — and we make a grave mistake if we dismiss him as a punch line," Boot explained. "We've committed that blunder before. Recall that the star of 'The Apprentice' was driven to run for the presidency partly because of the ridicule he received from comedian Seth Meyers and then-President Barack Obama at the 2011 White House Correspondents' Association dinner. Meyers even said: 'Donald Trump has been saying he will run for president as a Republican — which is surprising since I just assumed he was running as a joke.'"

"What has made dictators and demagogues so dangerous is their ability to pull vast numbers of people into their delusions, to turn their paranoid fantasies into harsh reality for millions," Boot continued. "Trump has the same malign gift."

Wallace asked Steele what it will take for him to switch parties and run for office as a Democrat, or for other Republicans to be willing to go further than just calling out their own party, and actually leave the GOP.

"That's the challenge for all of us right now is how do you navigate this new space that Trump has clearly defined?" Steele said. "I mean, to Max's point, you fundamentally have to understand how did that happen? Well, for about a 14, 15-year period, Trump had built this relationship with this vast number of people across the country. He, in effect, when he became a politician, turned his viewers into his voters. And so, like any good, you know, reality TV program, they stay stuck on that channel, and they like those episodes, and he plays to that narrative. So, for other programming, if you were to stay with that analogy, how do you now program against it? How do you draw people away from that?"

Steele argued that it isn't as simple as just turning a channel from "R" to "D."

"I think we fundamentally have to go deeper than that. you're not going to change the fact that, you know, 72 million Americans voted again for what Trump was selling them," he said. "After four years of witnessing the deconstruction of the administrative state, he picked up six, seven more million Americans. So, we fundamentally have to understand what we're in right now. This is, I mean, it's almost trite, as much as we're using it, but it is so damn true. This is about what our democracy is, what it will become. This is about the character of our leaders, and as the -- as citizens, we, the people, we're going to have to decide, is this us? Is this the new u.s.? Right? Is this the new us? And if it isn't, then what you're going to have to go into 2022 with everything and ten times more than you had in 2020."

Wallace implies it's time for republican anti-Trumpers to leave the GOP www.youtube.com