'There was no plan from the Trump administration to move Afghan civilians out': report 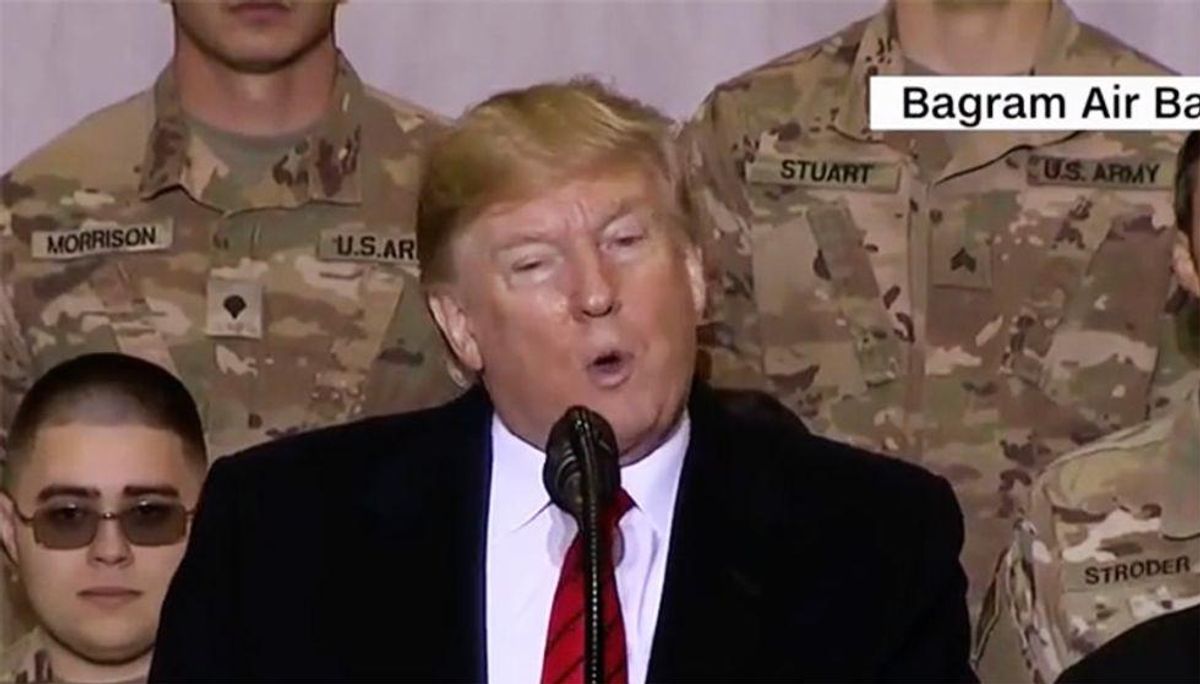 On Fox News this week, hosts have lambasted President Joe Biden for being MIA while Afghanistan falls into chaos. But the reality, according to an exclusive Axios report reveals that behind the scenes, the Biden team is scrambling to save American allies.

There is a backlog of Special Immigrant Visas (SIV) applications that the U.S. Embassy in Afghanistan was rushing to process using just a skeleton staff. Now, Afghan allies are in a complicated position because the Taliban won't allow them through to the airport without the proper paperwork. Afghans can't get the paperwork unless they get the necessary documents from the Embassy staff who are at the airport.

So, Biden's staff are working to hurry the process. They felt they were moving forward, but Kabul fell faster than anyone expected, as Gen. Mark Milley said in the Wednesday briefing.

"These officials' accounts of the bureaucratic, national security and health-related obstacles involved in protecting some of the most vulnerable and deserving Afghans may serve as a preview of testimony to come, as lawmakers and the American people demand answers about the botched U.S. withdrawal from Afghanistan," said the report.

Another barrier happened in March 2020 when, due to COVID protocols, the U.S. Embassy in Kabul paused visa interviews and application processes. They were reopened during Biden's second week in office.

Axios said that one of the officials was "alarmed" when it was discovered that "there was no plan from the Trump administration on how to move Afghan civilians out of the country, even though they had committed to leaving the country by May 1. So we began building one from scratch."

No One Left Behind co-founder Matt Zeller told MSNBC's Nicolle Wallace that for years he has been pushing every official in both administrations to evacuate the Afghan allies and even went so far as to propose a plan.

Axios reported that "the National Security Council held dozens of inter-agency meetings throughout the spring to figure out how to improve the SIV program." They then were able to get Congress to simplify the SIV process and allowed for double the number of officials handling applications.

"By May, they had cut the average time for SIV approval — from more than two years to less than one year — but with Biden calling for withdrawal by Aug. 31 the math still didn't work," said Axios.

Then there was a COVID outbreak in the Kabul Embassy, pausing all activity again for three weeks. Axios reported 20,000 Afghans in the SIV pipeline, but Biden told ABC News that he expects 50,000 to 65,000 Afghan allies and their families to be evacuated, ideally by Aug. 31.

As the report concluded, the SIV process wasn't meant to be a fast one nor was it intended to be used for mass evacuations as a country collapsed.

Speaking to MSNBC's Ari Melber Wednesday, Pentagon reporter Helene Cooper said that they believed if they began pulling out sooner than Kabul would have fallen faster, which would have precipitated the fall of the government faster.

Read the full report at Axios.com.