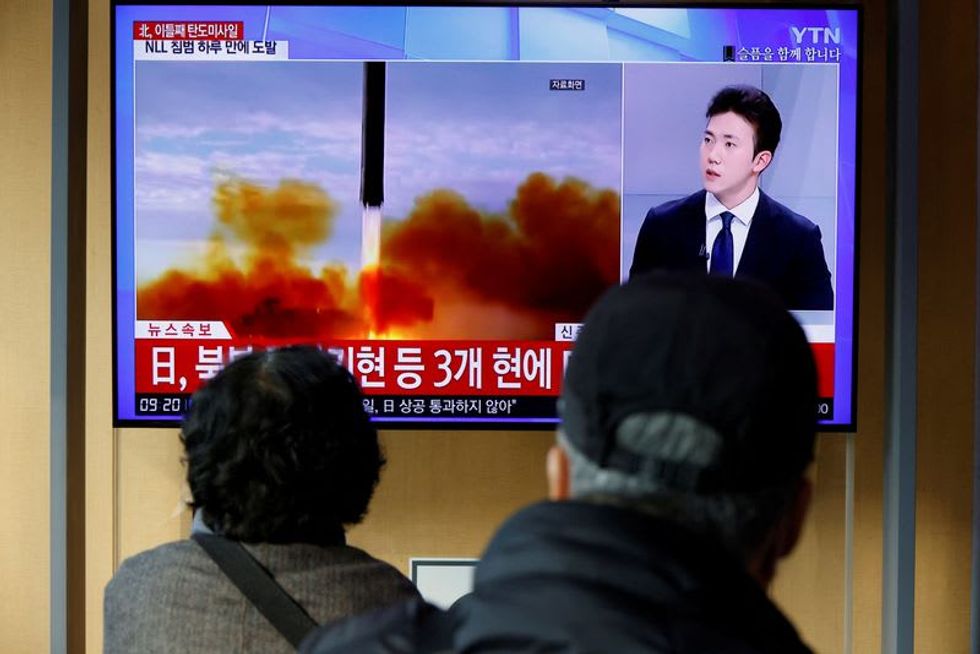 Despite an initial government warning that the apparent ICBM had flown over Japan, triggering warning alarms for some residents, Tokyo later said this was incorrect.

The launches came a day after the North fired a daily record 23 missiles, including one that landed off the coast of South Korea for the first time, and drew swift condemnation from Washington, Seoul and Tokyo.

Since Monday, South Korea and the United States have been conducting one of the largest air exercises ever, with hundreds of South Korean and U.S. warplanes, including F-35 fighters, staging around-the-clock simulated missions.

After Thursday's ICBM launch, the allies agreed to extend the drills past Friday, when they had been scheduled to end, South Korea's Air Force said in a statement.

"A strong combined defense posture of the ROK-U.S. alliance is necessary under the current security crisis that is escalating due to North Korean provocations," the statement said, using the initials of South Korea's official name.

Diplomats said the United States has asked the U.N. Security Council to convene publicly on North Korea, a request backed by other council members Britain, France, Albania, Ireland and Norway.

North Korea has long been banned from conducting nuclear tests and ballistic missile launches by the Security Council, which has strengthened sanctions on Pyongyang over the years to try and cut off funding for those programs.

However, in recent years the 15-member council has been split on how to deal with North Korea. In May, China and Russia vetoed a U.S.-led push to impose more U.N. sanctions in response to North Korean missile launches.

On Thursday, Pak Jong Chon, secretary of the Central Committee of North Korea's ruling Workers' Party, said the United States and South Korea had made a very dangerous decision by extending the drills, and were "shoving" the situation out of control.

"The United States and South Korea will find that they have made a terrible mistake that cannot be reversed," Pak said in a statement carried by the state KCNA news agency. He had previously issued statements demanding the drills be stopped.

South Korean and U.S. stealth aircraft simulating attacks during drills are most likely what led North Korea to test a record number of missiles this week, experts say, but Pyongyang may also be turning up the heat before a potential nuclear test.

Officials in South Korea and Japan said one missile on Thursday may have been an ICBM, which are North Korea's longest-range weapons and are designed to carry a nuclear warhead to the other side of the planet.

Japanese Defence Minister Yasukazu Hamada said the government lost track of the ICBM over the Sea of Japan, prompting it to correct its announcement that it had flown over the country.

"It means at some point in the flight path there was some problem for the missile and it actually came apart," he said.

North Korea has had several failed ICBM tests this year, according to South Korean and U.S. officials.

South Korea issued rare air raid warnings and launched its own missiles in response after Wednesday's barrage. On Thursday, the South's transportation ministry announced that air routes had reopened in the area where the missile had fallen, having been closed for around 24 hours.

After the first launch on Thursday, residents of Japan's Miyagi, Yamagata and Niigata prefectures were warned to seek shelter indoors, the J-Alert Emergency Broadcasting System said, though it was later confirmed the ICBM had not overflown Japan.

"It's fortunate that at the very least it didn't fly over Japan, but it's unthinkable how many times they (North Korea) can breach U.N. resolutions and keep repeating these illegal acts," said Toshio Sumie, 74, a Tokyo technician.

The first missile flew to an altitude of about 2,000 kilometres (1,242 miles) and a range of 750 km, he said. Such a flight pattern is called a "lofted trajectory", in which a missile is fired high into space to avoid flying over neighbouring countries.

South Korea's Joint Chiefs of Staff said the long-range missile was launched from near the North Korean capital Pyongyang.

About an hour after the first launch, South Korea's military and the Japanese coast guard reported a second and third launch from North Korea. South Korea said both of those were short-range missiles fired from Kaechon, north of Pyongyang.

Chinese foreign ministry spokesperson Zhao Lijian avoided commenting directly on the missile launches or potential sanctions on North Korea, instead repeating a standard line from Beijing that it hoped all parties could peacefully resolve issues through dialogue.