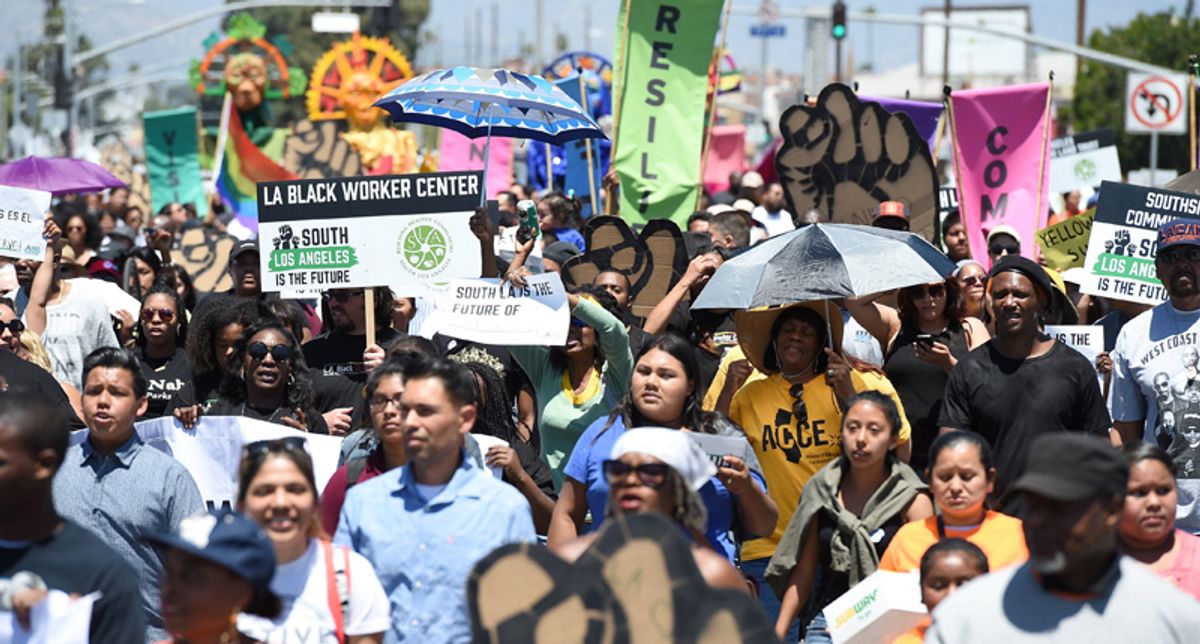 Protesters march from the intersection of Florence and Normandie Avenue, the flashpoint where the riots started 25 years ago, to a nearby park for a rally to remember and honor the victims of the 1992 Los Angeles riots in Los Angeles, California, U.S., April 29, 2017. REUTERS/Kevork Djansezian

The Oklahoma chapter of the ACLU is vowing to fight the state's Republican leadership following Gov. Kevin Stitt's signing of a law that will grant immunity to drivers who unintentionally hurt or kill protesters—while holding demonstrators accountable for threatening public safety instead.

"The ACLU of Oklahoma along with organizers on the ground are in a fight to end the systemic violence inflicted on our Black and Brown communities, and our government's escalating attacks on protests against racism and police brutality should concern everyone," said Nicole McAfee, the group's director of policy and advocacy.

"We are in serious conversations with partners on our next steps to protect Oklahomans' right to free speech," she added. "The power of protest belongs with the people, and we will not tolerate these attempts to silence Oklahomans."

Stitt signed the legislation, H.B. 1674, into law on Wednesday—the same day he signed H.B. 1643, which makes it a crime to post anything online that includes personally identifying information about a law enforcement officer. Examples could include photos of police officers wearing name badges, according to local ABC News affiliate KOCO-TV.

"They are targeting groups of protesters who are just wanting to use their freedom of speech, passing bills that will intimidate them." —Adriana Laws, Collegiate Freedom and Justice Coalition

The governor aims to stop "people from using their First Amendment rights," the Collegiate Freedom and Justice Coalition said.

While classifying the obstruction of a highway or street as a misdemeanor that could carry a sentence of up to a year in jail and fines as high as $5,000, H.B. 1674 will protect drivers "who unintentionally causes injury or death" from being held criminally or civilly liable if authorities believe the driver was "fleeing from a riot."

"This is America," tweeted former labor secretary Robert Reich, expressing disbelief regarding the new law, which is one of several anti-protest measures proposed and passed by Republican state lawmakers in the past year.

A law granting drivers immunity for hurting or killing protesters was also recently passed in Iowa, while Florida Gov. Ron DeSantis boasted that he signed "the strongest anti-looting, anti-rioting, pro-law-enforcement piece of legislation in the country" this week—a law which critics warned could result in felony charges for protesters if a demonstration becomes disorderly or violent, even for protesters who don't participate in the violence.

"This is consistent with the general trend of legislators' responding to powerful and persuasive protests by seeking to silence them rather than engaging with the message of the protests," Vera Eidelman, a lawyer at the ACLU, told the New York Times Wednesday. "If anything, the lesson from the last year, and decades, is not that we need to give more tools to police and prosecutors, it's that they abuse the tools they already have."

In Oklahoma, author and activist Rebecca Nagle tweeted, Republicans appear to simply be making official their intent to give favorable treatment to those who harm protesters while punishing people for exercising their First Amendment rights.

"I was at a Black Lives Matter march last summer in Tulsa where a truck drove through the crowd, struck several people, and in the commotion a man was pushed over a bridge and paralyzed," Nagle tweeted. "The driver was never charged—without this law in place."

USA Today reported that demonstrators had been hit more than 100 times by drivers last summer as racial justice protests spread across the country.