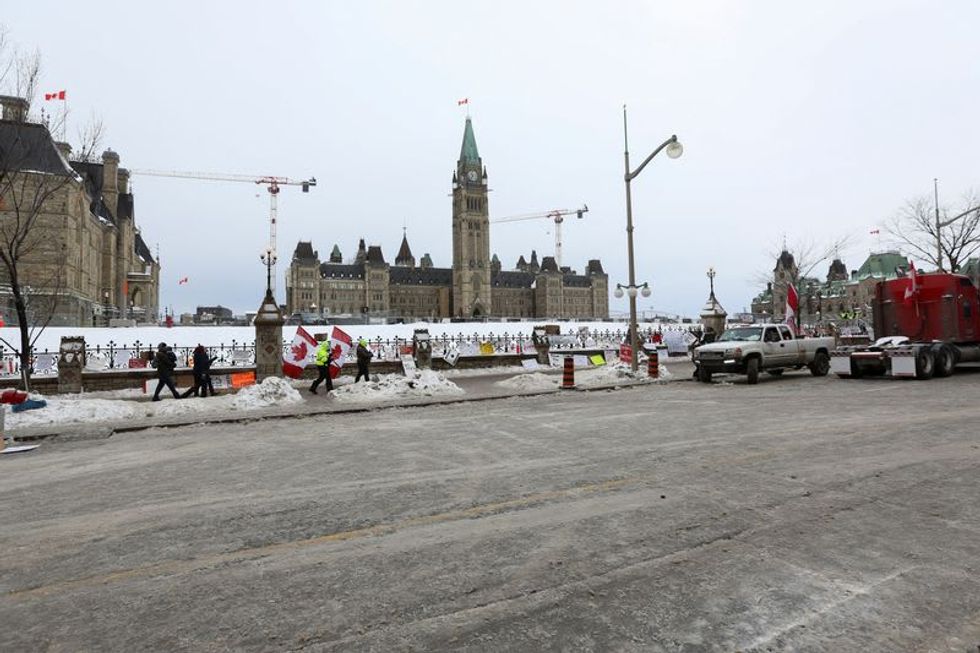 By Lars Hagberg and David Ljunggren

OTTAWA (Reuters) - Protesters camped out in the Canadian capital outnumber the police and control the situation, the city's mayor said on Sunday, as a demonstration against vaccine mandates entered a 10th day and the government said it would not back down on the issue.

The "Freedom Convoy" began as a movement against a Canadian vaccine requirement for cross-border truckers but has turned into a rallying point against public health measures and Prime Minister Justin Trudeau's government.

"The convoy can disagree, but they're not above the law and there should be a peaceful resolution to this as quickly as possible," Canadian Public Safety Minister Marco Mendicino said on CBC television.

"We put the question of vaccines and vaccine mandates on the ballot ... in the (2021) election and we're simply carrying out the promise that we made with the support of the vast majority of Canadians."

Protesters have paralyzed downtown Ottawa for the past nine days, with some participants waving Confederate or Nazi flags and some saying they wanted to dissolve Canada's government.

Amid incessant horn blaring and occasional fireworks, a polished supply chain -- including portable saunas, a community kitchen and bouncy castles for children -- has sustained the protesters to the fury of residents who blame police for inaction.

"The situation at this point is completely out of control because the individuals with the protest are calling the shots," Ottawa Mayor Jim Watson said on a local radio station. "They have far more people than we have police officers."

Ottawa police relocated some protesters and put up fresh barricades on Sunday, saying they are "collecting financial, digital, vehicle registration...and other evidence that will be used in criminal prosecutions."

Trudeau, who is isolating after testing positive for COVID-19 last week, has ruled out using the military to disband the protest. Due to security concerns, Trudeau and his family left their downtown home last weekend and his location has not been disclosed.

The prime minister has said the convoy represented a "small fringe minority" and the government would not be intimidated. About 90% of Canada's cross-border truckers and almost 79% of the population has had two COVID-19 vaccine shots.

Convoy organizers said they would refrain from using their horns on Sunday for four hours "as a gesture of goodwill".

"Out of respect for the Lord's Day, for members of our military who have sacrificed and who continue to sacrifice so much for our freedom, for the men and women in blue who are doing such a superb job protecting us ... members of our convoy will desist from the blowing of horns," the group said in a statement.

Police said they had charged four people with hate crimes and were investigating threats against public figures jointly with the U.S. Federal Bureau of Investigation.

The well-organized blockade has relied partly on funding from sympathizers in the United States, police said. GoFundMe took down the Freedom Convoy's donation platform, angering some U.S. Republican lawmakers who pledged to investigate https://www.reuters.com/world/florida-governor-investigate-gofundme-over-canada-trucker-donations-2022-02-05 the website's move.

A senior member of the Liberal government said the ease with which the convoy shut down the area around the parliament and the seeming impotence of police was a "national humiliation".

Senior opposition Conservatives who encouraged the protests, including taking selfies with some truckers, did not reply to requests for comment. Last week, the party ditched its leader in part for not initially backing the blockade enthusiastically enough.