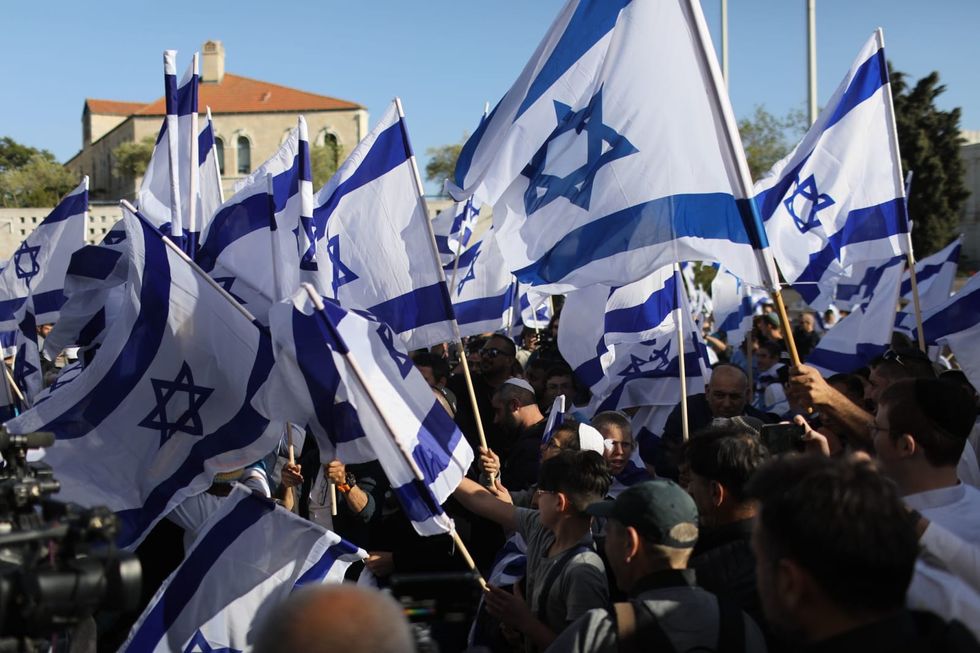 Israeli right-wing activists hold national flags as they march towards Damascus gate in the old city of Jerusalem. Ilia Yefimovich/dpa

Police stopped an unauthorized flag march by right-wing nationalist Israelis planning to trace the walls of Old Town Jerusalem on Wednesday, with Israeli-Palestinian tensions over the city's holy sites spiking once again.

Authorities had prohibited the march for security reasons, and Israeli police halted it with a blockade shortly after it began. Shoving ensued.

In the evening, Palestinian militants in the Gaza Strip fired a rocket at the Israeli border area.

According to the Israeli army, warning sirens sounded in the town of Sderot and projectile was identified.

Ahead of the march, militant Palestinian organizations in the Gaza Strip had issued a sharp warnings they had "their finger on the trigger."

In the past few days, Israeli security forces have clashed with Palestinians on the Noble Sanctuary/Temple Mount in Jerusalem. Numerous people have been injured, heightening tensions following a wave of terror attacks in recent weeks.

The Noble Sanctuary, with the Dome of the Rock and the Al-Aqsa Mosque, is the third holiest site in Islam. It is also revered by Jews as the Temple Mount because two Jewish temples used to stand there.

The complex is under Muslim administration, but Israel controls security.

Right-wing Israeli parliamentarian Itamar Ben Gvir took part in the march. Prime Minister Naftali Bennett had earlier ordered that Ben Gvir be prevented from getting to the Damascus Gate, which leads to Jerusalem's Old City. "I will not allow petty politics to endanger human lives," Bennett said.

Last year, Islamist Hamas, which governs the Gaza Strip, fired rockets at Jerusalem during a similar march on May 10. Israel then bombarded targets in the coastal territory, killing 255 Palestinians over 11 days. In Israel, 14 people died as a result.