Pope calls for 'good politics,' warns against enemies of democracy 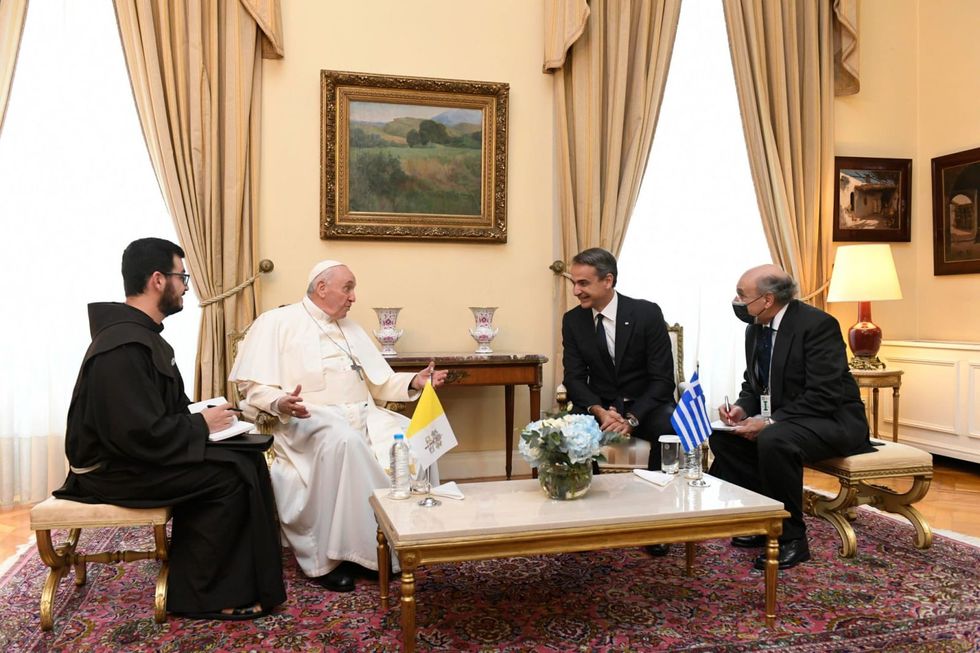 During his visit to Greece, Pope Francis praised the achievements of politics while warning against the enemies of democracy.

"Democracy was born here," the pontiff recalled in Athens on Saturday after being received by President Katerina Sakellaropoulou.

"From the cradle, millennia later, became a house, a great house of democratic peoples: I refer to the European Union and to the dream of peace and fraternity that it represents for many peoples."

Francis had flown from Cyprus to Athens in the morning for the second leg of a trip to the eastern Mediterranean.

The head of the Catholic Church underlined the country's central role in history in his speech, which was peppered with references to the classical authors, thinkers and scholars of antiquity such as Homer, Aristotle and Hippocrates.

"Without Athens and Greece, Europe and the world would not be what they are," Francis said. "They would be less wise and less happy."

But now it is important not to lose what has been achieved. One can "only note with concern that it is not only on the European continent that there is a regression in democracy," the Pope warned.

Some societies are numbed by consumption, tired and dissatisfied with democracy. He therefore called on everyone to participate in public life and politics and to be patient.

At the same time, he said, there is scepticism about democracy because of, for example, too much bureaucracy or a certain loss of identity.

"The remedy for this does not lie in the obsessive search for popularity, in the addiction to attention, in announcing impossible promises or in agreeing to abstract ideological colonisation, but in good politics," the pontiff emphasized.

Pope Francis had left Cyprus earlier Saturday for the second leg of his five-day trip to the eastern Mediterranean.

A meeting with Orthodox Archbishop Ieronymos II, politicians and representatives of the Church and civil society were planned in the Greek capital on Saturday.

The papal delegation flew out from Cyprus, where the pontiff had been visiting since Thursday and had given a remarkable and intense speech on the consequences of the migration crises.

Refugees will also be a major topic in Greece. On Sunday, Francis will fly to a migration camp on Lesbos for a short visit.