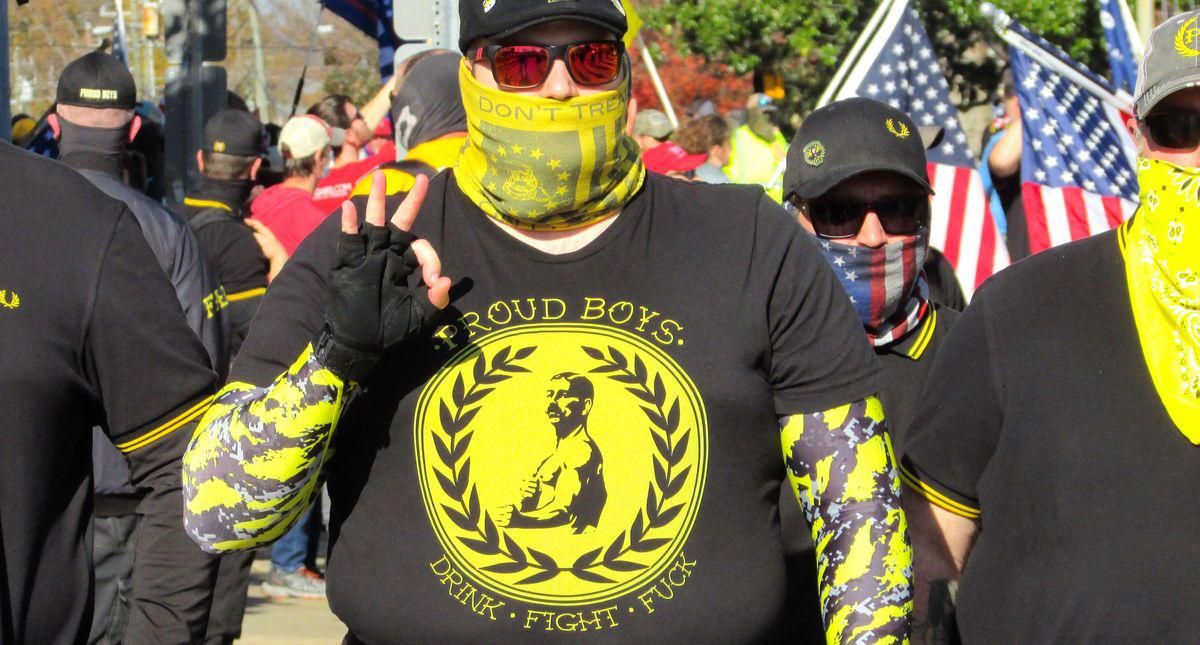 Local Proud Boys chapter presidents in North Carolina and Pennsylvania coordinated communications for the Jan. 6 assault on the US Capitol as part of a quartet of leaders in the violent nationalist street gang, according to a federal indictment unveiled today.

The indictment charges Charles Donohoe, president of the Piedmont North Carolina chapter, and Zachary Rehl, president of the Philadelphia chapter, along with Ethan Nordean, aka Rufio Panman, and Joe Biggs with conspiracy to interfere with Congress' certification of the electoral college vote and to interfere with law enforcement during a civil disorder when the Capitol was stormed. Nordean, Biggs and Rehl are additionally accused of breaching the Capitol.

Nordean, who came to fame among the Proud Boys and the wider far right when he delivered a knockout punch to an antifascist counter-protester during a confrontation in Portland, Ore. in the summer of 2018, led a large group of Proud Boys who marched to the Capitol on January 6th. The government has previously alleged that Nordean was granted "war powers" within the organization after its national chairman, Enrique Tarrio, was arrested on Jan. 4 for vandalizing a banner stolen from a church and weapons charges. In a video livestreamed by another Proud Boys member, Nordean can be seen carrying a megaphone and giving commands, while conferring with Biggs, an Army veteran and former InfoWars contributor, and Donohoe.

The indictment portrays an elaborate effort to coordinate the assault on the Capitol through encrypted messaging, with a frantic effort to set up a new communications network after Tarrio's arrest.

The government alleges that Donohoe set up a new encrypted channel called "New MOSD" because he was concerned that the Proud Boys' communications would be compromised once law enforcement examined Tarrio's phone.

"Hey have been instructed and listen to me real good!" Donohoe reportedly said in a message posted to various encrypted messaging channels used by the Proud Boys on the evening of Jan. 4. "There is no planning of any sorts. I need to be put into whatever thing is created. Everything is compromised and we can be looking at Gang charges." The government also said Donohoe "took steps to destroy or 'nuke' the earlier channel."

Later that evening, an unidentified Proud Boys member referenced as an unindicted co-conspirator posted in the "New MOSD" channel: "We had originally planned on breaking the guys into teams. Let's start divvying them up and getting Baofeng channels picked out."

While traveling to Washington DC on Jan. 5, Rehl told the others that he was bringing a batch of radios with him, according to the indictment. Shortly after he arrived, at 9:03 p.m., Donohoe responded by requesting one of the radios.

"Stand by for the shared baofeng channel and shared zello channel, no Colors, be decentralized and use good judgment until further orders," the unindicted co-conspirator wrote in a message on the "Boots on the Ground" channel at 9:03 p.m., according to the indictment. "Rufio is in charge, cops are the primary threat, don't get caught by them or BLM, don't get drunk until off the street."

The indictment suggests that Biggs and Donohoe were liaising between two discrete communications networks, citing a message on the evening of Jan. 5 on the "New MOSD" from Biggs indicating that he had spoken with Tarrio.

Donohoe reportedly replied: "What's the plan so I can pass it to the MOSD guys."

At 6:37 a.m. on the morning of President Trump's speech at the Ellipse and the assault on the Capitol, the government alleges that Donohoe posted to the "New MOSD" channel: "Are we gonna do a commanders briefing before the 10 a.m."

As the Proud Boys advanced on the Capitol, members of the crowd removed metal barriers on the grounds, and the government alleges that the encrypted messaging boards used by the Proud Boys signaled that people were "storming" the building. The indictment says that Donohoe "assisted the crowd's effort to advance up a flight of stairs towards the Capitol." Biggs, according to the indictment, entered a door of the Capitol that was opened by Dominic Pezzola, another Proud Boy, who had breached the building by using a stolen riot shield to bust through a window.

Biggs, Nordean and Rehl entered the Capitol through different points, according to the indictment, which also says Biggs left after the first breach and then forcibly re-entered by pushing past at least one law enforcement officer and made it to the Senate chamber.

According to the government, Donohoe, the only one among the four who didn't enter the Capitol, announced on the "Boots on the Ground" channel as other rioters were leaving: "We are regrouping with a second force."

Donohoe appeared in federal court in Winston-Salem on Friday afternoon wearing a blue jumpsuit, handcuffs and leg irons for a status hearing. The government said in a brief arguing for pre-trial detention that the Proud Boys leader should not be released from custody because he poses a risk to obstruct justice. Donohoe's court-appointed lawyer did not oppose the motion.

The government brief specifically cited Donohoe's instruction to fellow Proud Boys to use encrypted messaging and his destruction of prior communications to evade law enforcement in the days leading up to the insurrection, and the fact that he participated in the campaign despite acknowledging that he might be criminally charged for doing so.

As early as Nov. 27, amid a pair of pro-Trump rallies at which Proud Boys assaulted left-wing opponents and DC residents in the runup to the Jan. 6 insurrection, the group's leaders were threatening violent retribution against anyone who might stand in the way of Trump disregarding the outcome of the 2020 election and retaining power.

"We tried playing nice and by the rules, now you will deal with the monster you created," Nordean wrote on social media on Nov. 27, according to the government. "The spirit of 1776 has resurfaced and has created groups like the Proudboys and we will not be extinguished. We will grow like the flame that fuels us and spread like love that guides us. We are unstoppable, unrelenting and now… unforgiving. Good luck to all you traitors of this country we so deeply love… you're going to need it."

Rehl reportedly posted on social media the same day: "Hopefully, the firing squads are for the traitors that are trying to steal the election from the American people."

Donohoe was featured in a TV show featuring Marine Corps veterans called "Leatherneck Reconnect" in February 2019. Introducing himself to the hosts he said, "Marine Corps is my blood. The only thing I care about is life, liberty and the pursuit of happiness. And anyone who doesn't agree with that is a traitor, and they deserve a traitor's death."

The episode also shows Donohoe riding in the back of a 5-ton military truck through downtown Winston-Salem at night and yelling, "America's coming through!"

On July 4, Donohoe would join a Proud Boys march in Washington DC.

And later that year, in September, he made a post on Telegram, urging violence against left-wing opponents. In time, the Proud Boys would redirect that violence against Capitol and Washington DC Metro police officers.

"We need to stop fighting antifa in the streets where the cops are and start fighting them in bars and alleys," Donohoe wrote, according to the Daily Beast. "We need to stomp them. We need to ruin their lives physically like they have ruined ours financially with doxing. We need to rack up their hospital bills We need to use special operations tactics and lightning strike them."
SmartNews
Report typos and corrections to: corrections@rawstory.com.
#story_page_post-content_regular-site
READ COMMENTS - JOIN THE DISCUSSION

When news broke that Monsignor Jeffrey Burrill, the General Secretary of the U.S. Conference of Catholic Bishops, resigned after revelations that he was connecting with men on the gay hookup app Grindr, it seemed like something that's become familiar, bubbling over with schadenfreude. Here was another hypocrite in power — the Catholic bishop's conference is an extremely anti-LGBTQ force in the American church — revealed by gay and bisexual men who'd connected with him.

We've come to revel in these kinds of stories, where gay men on gay hookup apps reveal the truth about a right-wing politician, or sometimes a conservative religious zealot, with whom they've engaging in sexually charged chats or even met with — a person aiding and abetting the harm done to LGBTQ people with religious condemnations that drive some LGBTQ youth take their own lives, or influencing lawmakers who are lobbied to strip away rights. The story often goes viral on social media, and we're all glad to see a homophobe fall from power.