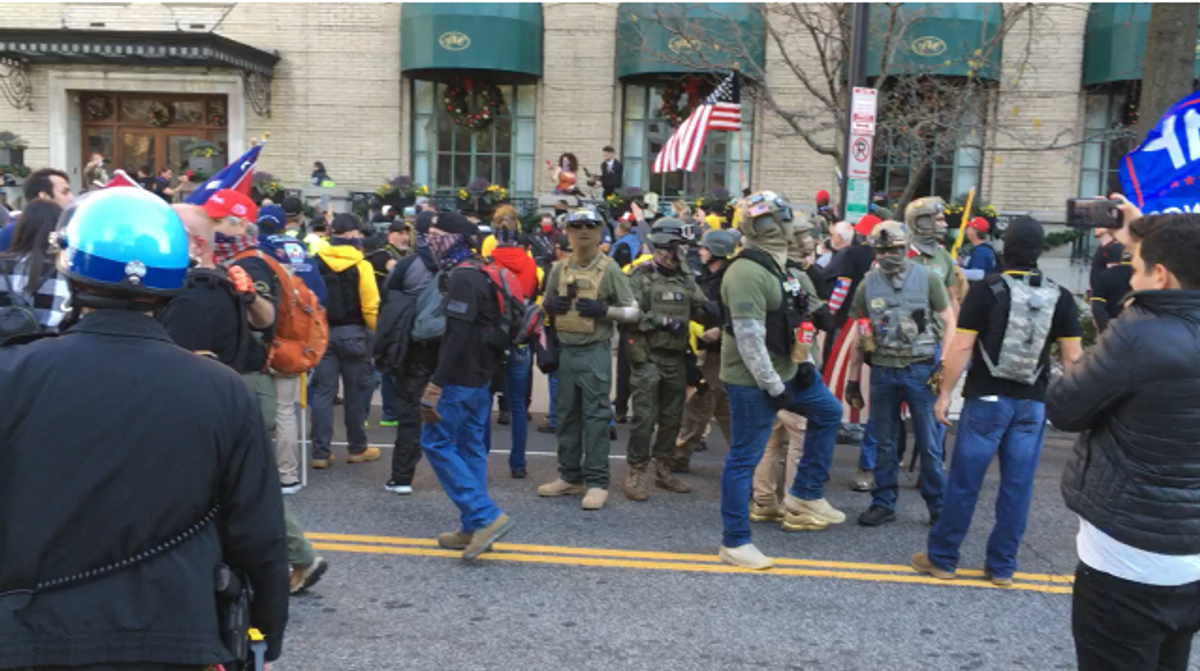 With Congress convening for a joint session today to certify the electoral votes for President-elect Joe Biden, Washington DC is bracing for violence from Proud Boys and other far-right supporters who are feeling legitimized by Donald Trump's refusal to accept the results of the election.

Trump's Dec. 19 tweet promising a "big protest in DC on January 6th" and calling on supporters to "be there, will be wild" galvanized supporters to mobilize for the day, and for the past 24 hours the president has been using Twitter to talk up his appearance at the rally.

"Washington is being inundated with people who don't want to see an election victory stolen by emboldened Radical Left Democrats," Trump wrote on Twitter, repeating the falsehood that Biden's electoral victory was achieved through fraud. "Our Country has had enough, they won't take it anymore! We hear you (and love you) from the Oval Office. MAKE AMERICA GREAT AGAIN!"

Roughly a dozen senators, led by Sen. Ted Cruz (R-Texas), are entertaining the delusions of Trump's diehard supporters by pledging to protest the certification of Biden's election, while intrigue has swirled around the question of whether Vice President Mike Pence, as presiding officer, will certify the electoral votes, although constitutional experts widely agree that he doesn't have the authority to overturn the result and his role is largely a ceremonial one.

Chatter among Trump supporters planning to attend today's rally on Parler and other social media platforms has bristled with violence and threats to utilize firearms, in defiance of DC's strict gun laws.

Some Republican officials have stoked the violence, encouraging the temptation among Trump's supporters to abandon democratic processes and resort to an armed uprising to prevent the peaceful succession of power.

Responding to a federal judge's New Year's Day dismissal of a lawsuit aimed at pressuring Pence to overturn the results of the election, Rep. Louie Gohmert (R-Texas) said in an interview with the conservative network Newsmax: "If bottom line is the court is saying, 'We're not going to touch this, you have no remedy,' basically in effect the ruling would be that you gotta go to the streets and be as violent as antifa and BLM."

The message hasn't been lost on Trump's far-right supporters.

A New York State Proud Boy posting on Parler under the screenname "NineLine" responded ecstatically on Monday, writing, "@RepLouieGohmert says that #Patriots need to be as violent as BLM/Antifa! That's our go-ahead!!" On Tuesday, he announced, "Arrived in DC safe and sound!"

High-profile supporters like Lin Wood, an Atlanta personal injury lawyer who has rallied Trump supporters and promoted bizarre claims about foreign manipulation of the election, have become increasingly militant, making wild accusations against any Republicans perceived to be displaying the slightest disloyalty to Trump.

Wood's tweet on New Year's Day predicting Pence will wind up in "in jail awaiting trial for treason" and "face execution by firing squad" was extreme even for many staunch Trump allies, drawing public rebuke from former White House strategist Sebastian Gorka and from Jenna Ellis, an attorney for the Trump campaign.

But predictably, Woods' fantasy about a violent political purge has shaped a narrative among far-right actors watching to see whether the vice president plays the heroic rescuer or despised traitor for their cause.

During a trans-Atlantic video chat on Sunday bringing together English far-right campaigner Tommy Robinson with American Proud Boys Jeremy Bertino and Bill Whicker III, a man identified as "Ralph (The Patriot) Pina" described Pence as the crucial figure in the American election drama.

"It's going to go down one of two ways," Pina told Robinson. "Either Pence is going to show himself to be a patriot, and he recognizes the truth of everything going on, right? And he lays it all out in the House and in the Congress on the 6th. However, should Pence prove himself not to be the patriot he needs to be, he's just now opened the gate for Trump to call up the Insurrection Act and fix it from there. Either way it goes, there's gonna be civil unrest in this country."

Like Wood and others in the Trump cult, Pina expressed faith in a rapture-like revelation of evil and corruption that will set the stage for a violent settling of accounts.

"There's not going to be a President Joe Biden," Pina insisted. "It's just not gonna happen…. There's just way, way too much stuff they're sitting on, they're holding on to. They haven't released a fraction of what is sitting there.

"What I'm hoping for is Trump wins," Pina continued as the other chat participants let out a peel of laughter, "the leftists lose their minds, and it gave me a reason to finally go out there and test some of the new firepower I've acquired in the past couple years."

Bertino, who was hospitalized due to a stabbing the last time the Proud Boys rallied in DC on Dec. 12, murmured, "In Minecraft," a common refrain among far-right extremists used to gloss over violent threats with a veneer of plausible deniability.

Discussion about guns and armed confrontation surrounding planning on Parler for today's rally in DC is not rare. Discussion on the conservative social media platform also shows that Proud Boys and their far-right allies have turned decisively against law enforcement, growing out of their frustration that DC police prevented repeated attempts to march into Black Lives Matter Plaza and start fights with antifascists on Dec. 12.

"If you're going to DC expecting it to be peaceful, I wouldn't bet on it lol," wrote one Parler user on New Year's Eve. "I think for anyone who has the balls to do so, you might want to bring some stuff. Things are already fired up now, just wait until more police thugs arrest non-mask wearers over the next few days. Let alone the antifa/BLM retards."

Another user responded, "I'm going to tell people to prevent the cops from arresting anybody on our side. I'm going to be there." The second user added, "It's time for some blue blood."

That user, whose account has since been taken down, is among Trump supporters who have discussed storming Congress to prevent members from certifying Biden as the president.

"We're gonna kill Congress," he wrote. "Sorry to burst your bubble btw not a PB [Proud Boy] but I'm good enough with words I'll get people to go in there anyways." In another post, the man who described himself in his Parler profile as a "homeschooled masculine, intellectual militia member" who believes he has a right to own a tank, tagged Bertino in a post in which he advised bringing rifles to shoot at police helicopters and blocking streets with vehicle to create an urban battlefield.

While DC will be the center of attention, Trump supporters are also urging rallies in state capitols, among them a "Wild Protest West Coast" scheduled for noon in front of Los Angeles City Hall and a "SC MAGA Rally" scheduled for 10 a.m. in Columbia.

The discussion about bringing weapons and ammunition into the city has, to some degree, materialized in real life.

DC police arrested Proud Boys chairman Enrique Tarrio in the city on Monday, charging him with misdemeanor destruction of property after he admitted to burning a Black Lives Matter banner stolen from a Black church on Dec. 12. During the arrest, police discovered high-capacity firearms magazines in Tarrio's possession.

And on Tuesday afternon, the Washington Post reported, DC police pulled over a North Carolina bus for a traffic violation, and discovered a person carrying two firearms — a rifle and a semiautomatic handgun — along with a drum magazine."