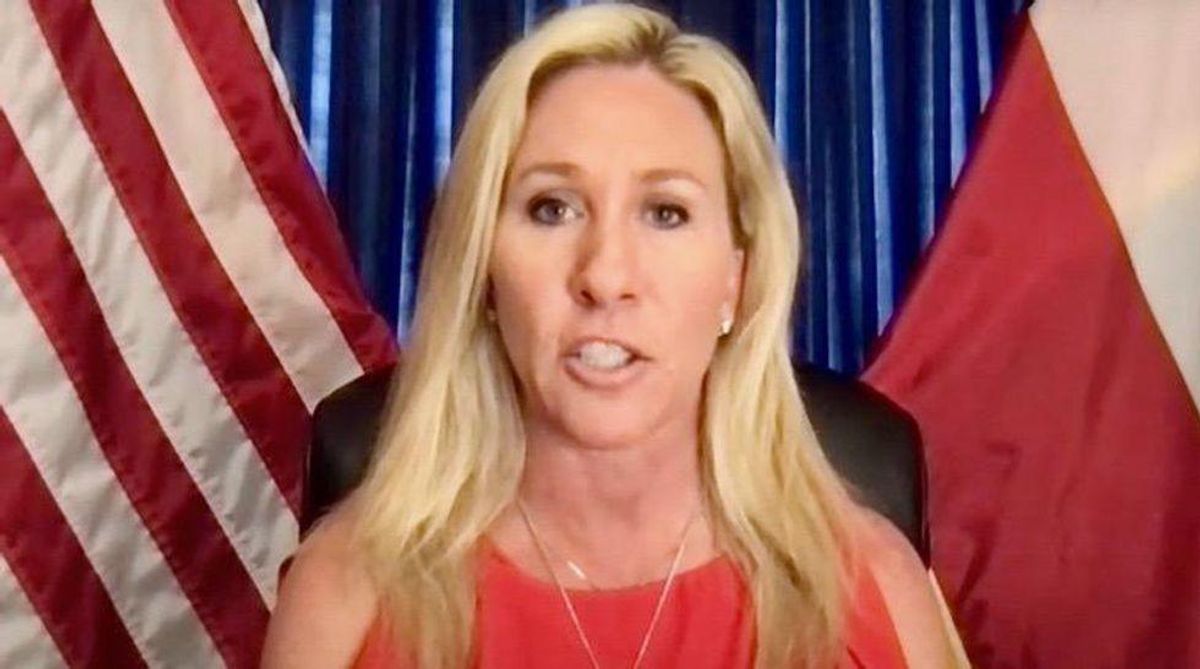 U.S. Rep. Marjorie Taylor Greene's Twitter account has been suspended for a week after the Georgia conspiracy theorist and disinformation purveyor posted what the social media company labeled as "misleading" coronavirus information.

Falsely claiming the coronavirus vaccines are "failing," Greene declared the FDA "should not approve" them. The FDA is expected to give final approval to the Pfizer coronavirus vaccine by Labor Day, handing anti-vaxxers a major defeat.

While not labeled as misleading Greene on Monday also retweeted several unverified claims made by Twitter users claiming ill effects from the vaccine.

CNN notes this is at least the third time Greene has been suspended, but New York Times tech and disinformation reporter Davey Alba says it's her fourth, "meaning she could be permanently banned from the service if she shares coronavirus misinformation again."

Meanwhile, many on the social media platform are cheering, blasting Greene and the GOP, and urging Twitter to make the suspension permanent.

It's past time that Marjorie Taylor Greene was suspended from Twitter for deliberately spreading COVID disinformation. Greene also spreads disinformation about Jews for her own political power. The suspension should become permanent.https://t.co/HJyRhknT5s
— Joel Rubin (@JoelMartinRubin) August 10, 2021

LMFAO, Marjorie Taylor Greene has been suspended from Twitter for a week because of her lies about vaccines! Please @Twitter: MAKE IT PERMANENT.
— BrooklynDad_Defiant! (@mmpadellan) August 10, 2021

Marjorie Taylor Greene was just suspended from Twitter for one week, for yet again lying about Covid and vaccines (she herself is vaccinated). She is a legitimate public health threat, and danger to this countries well being. RT if you think @Twitter should permanently ban her.
— Really American 🇺🇸 (@ReallyAmerican1) August 10, 2021

Twitter has suspended Marjorie Taylor Greene's account for one week following yet another violation of the platform's rules. If you ask me, she should be suspended PERMANENTLY. https://t.co/x8EnuEJskt
— Jon Cooper 🇺🇸 (@joncoopertweets) August 10, 2021

Marjorie Taylor Greene was suspended from Twitter (again) for a week for spreading disinformation about vaccines. Retweet if you think it's past time for Twitter to BAN HER PERMANENTLY!
— MeidasTouch.com (@MeidasTouch) August 10, 2021

Breaking: Marjorie Taylor Greene has been suspended from Twitter. Retweet if you agree: it should be permanent.
— Kim Mangone (@KimMangone) August 10, 2021

Marjorie Taylor Greene has been suspended from Twitter for a week for spreading vaccine disinformation. Raise your hand if you think Rep. Greene should be permanent banned ✋
— Jack Cocchiarella (@JDCocchiarella) August 10, 2021