Record-smashing heatwaves are hitting Antarctica and the Arctic simultaneously. Here’s what’s driving them, and how they’ll impact wildlife

Record-breaking heatwaves hit both Antarctica and the Arctic simultaneously this week, with temperatures reaching 47℃ and 30℃ higher than normal.

Heatwaves are bizarre at any time in Antarctica, but particularly now at the equinox as Antarctica is about to descend into winter darkness. Likewise, up north, the Arctic is just emerging from winter.

Are these two heatwaves linked? We don’t know yet, and it’s most likely a coincidence. But we do know weather systems in Antarctica and the Arctic are connected to regions nearest to them, and these connections sometimes reach all the way to the tropics.

And is climate change the cause? It might be. While it’s too soon to say for sure, we do know climate change is making polar heatwaves more common and severe, and the poles are warming faster than the global average.

So let’s take a closer look at what’s driving the extreme anomalies for each region, and the flow-on effects for polar wildlife like penguins and polar bears. 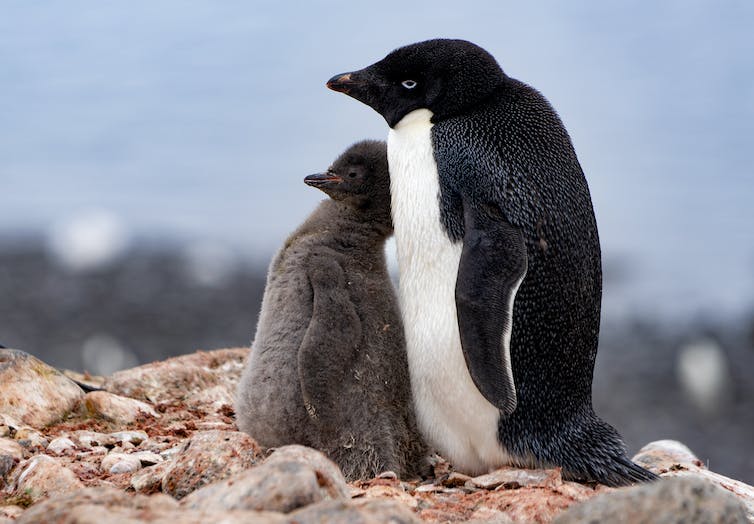 At this time of year, Adélie penguin chicks leave the nest to go hunting at sea on their own.

What happened in Antarctica? 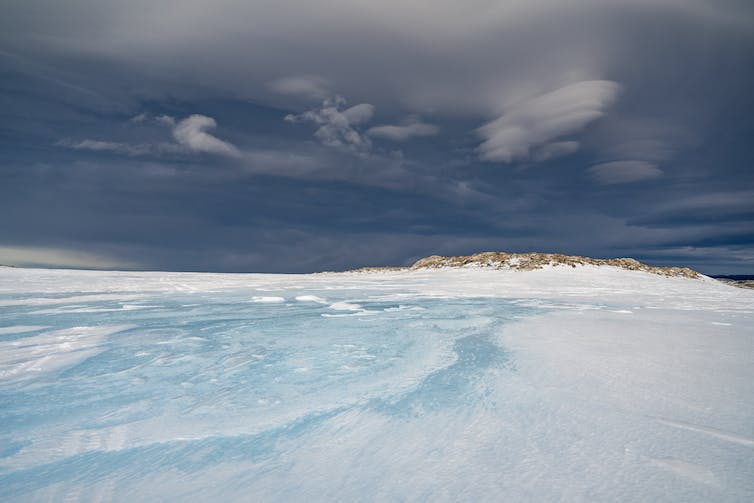 Since it’s autumn in Antarctica, temperatures in the continent’s interior weren’t high enough to melt glaciers and the ice cap. But that’s not to say large swings in temperature didn’t occur.

For example, Vostok in the middle of the ice plateau hit a provisional high of -17.7℃ (15℃ higher than previous record of -32.6℃). Concordia, the Italian-French research station also on the high plateau, experienced its highest ever temperature for any month, which was about 40℃ above the March average. 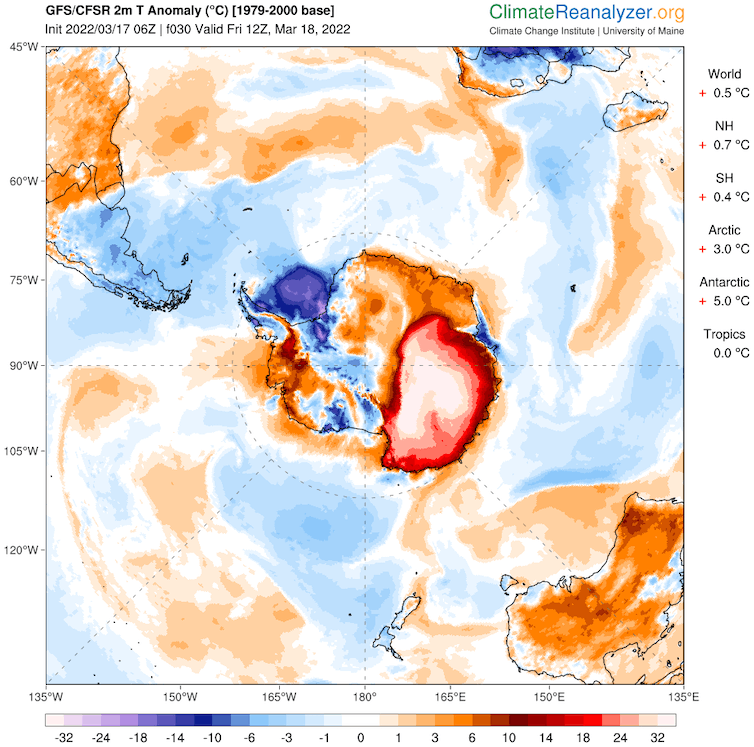 Air temperature anomalies across Antarctica at 2m above ground for the Mar 18. 2022.

The story is very different on the coast as rain fell, which isn’t really common for the continent.

The rain was driven primarily by an atmospheric river – a narrow band of moisture collected from warm oceans. Atmospheric rivers are found on the edge of low pressure systems and can move large amounts of water across vast distances, at scales greater than continents.

Despite their rarity, atmospheric rivers make an important contribution to the continent’s ice sheets, as they dump relatively large amounts of snow. When surface temperatures rise above freezing, rain rather than snow falls over Antarctica.

Last Monday (March 14) air temperatures at the Australian Casey Station reached a maximum of -1.9℃. Two days later, they were more like mid-summer temperatures, reaching a new March maximum of 5.6℃, which will melt ice.

This is the second heatwave at Casey Station in two years. In February 2020, Casey hit 9.2℃, followed by a shocking high of 18.3℃ on the Antarctic Peninsula.

Adélie penguins, which live across the entire Antarctic coastline, have recently finished their summer breeding. But thankfully, the Adélie penguin chicks had already left for sea to start hunting for food on their own, so the heatwave did not impact them.

The rain may have affected the local plant life, such as mosses, especially as they were in their annual phase of drying out for the winter. But we won’t know if there’s any damage to the plants until next summer when we can visit the moss beds again. 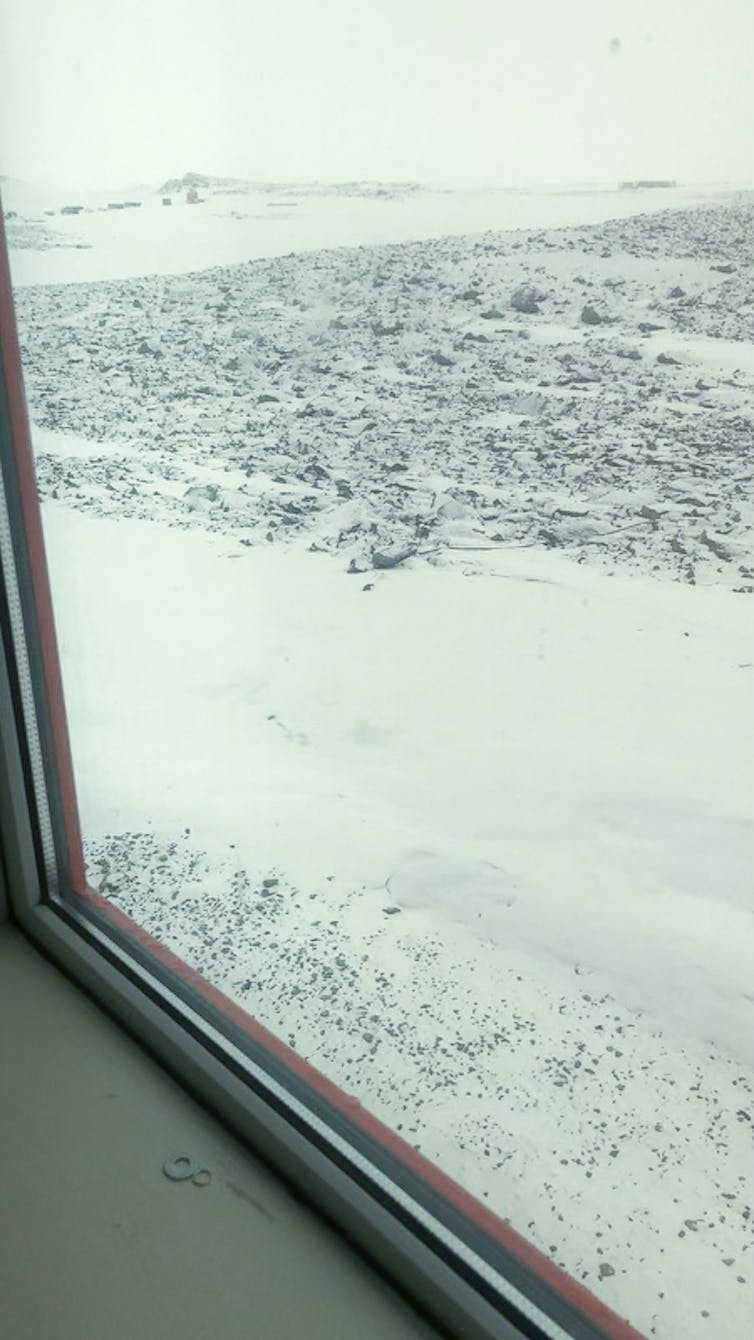 What about the Arctic?

A similar weather pattern occurred last week in the Arctic. An intense low pressure system began forming off the north-east coast of the United States. An atmospheric river formed at its junction with an adjacent high pressure system.

This weather pattern funnelled warm air into the Arctic circle. Svalbald, in Norway, recorded a new maximum temperature of 3.9℃.

US researchers called the low pressure system a “bomb cyclone” because it formed so rapidly, undergoing the delightfully termed “bombogenesis”. 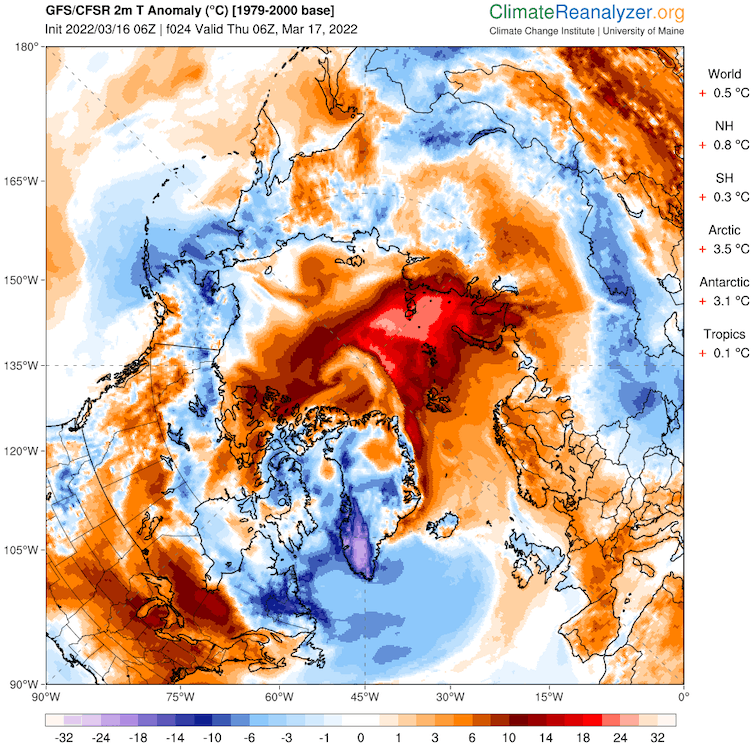 Arctic air temperature anomalies at 2 metres above the ground for March 17, 2022.

Winter sea ice conditions this year were already very low, and on land there was recent record-breaking rain across Greenland.

If the warm conditions cause sea ice to break up earlier than normal, it could have dire impacts for many animals. For example, sea ice is a crucial habitat for polar bears, enabling them to hunt seals and travel long distances. 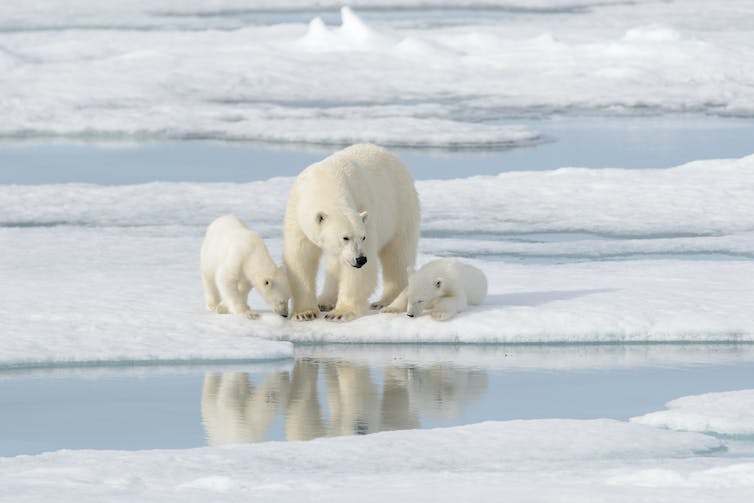 Early melting of Arctic ice sheets could have dire consequences for polar bears.

Many people live in the Arctic, including Arctic Indigenous people, and we know losing sea ice disrupts subsistence hunting and cultural practices.

What’s more, the bomb cyclone weather system brought chaotic weather to many populated areas of the Northern Hemisphere. In northern Norway, for instance, flowers have began blooming early due to three weeks of abnormally warm weather.

A harbinger for the future

Modelling suggests large-scale climate patterns are become more variable. This means this seemingly one-off heatwave may be a harbinger for the future under climate change.

In particular, the Arctic has been warming twice as fast as the rest of the world. This is because the melting sea ice reveals more ocean beneath, and the ocean absorbs more heat as it’s darker.

In fact, the Intergovernmental Panel on Climate Change (IPCC) projects Arctic sea ice to continue its current retreat, with ice-free summers possible by the 2050s.