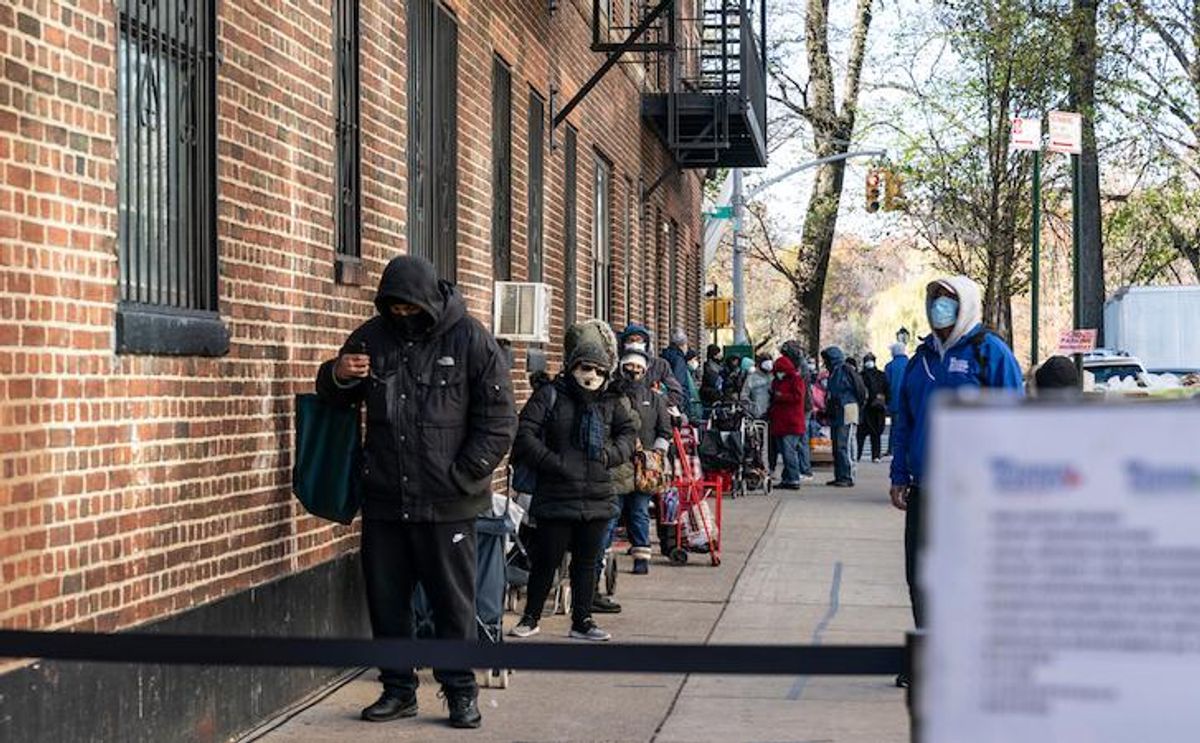 People waiting in line to receive food in New York City (Shutterstock)
In the wake of Sunday night's agreement on a roughly $900 billion Covid-19 relief package that is far smaller than economists say is necessary, progressives argued that the "slap-in-the-face" bill must be passed to help stem the suffering of working-class Americans but that much more will be needed to address the crisis that has claimed more than 300,000 lives and 20 million jobs in the United States so far. "To say this relief package is a day late and a dollar short is an understatement to say the least," said People's Action director George Goehl in a statement released Sunday night. Senate Majority Leader Mitch McConnell (R-Ky.) and his fellow congressional Republicans "prioritized the profits of the 1% over the well-being of everyone else since this pandemic began," Goehl said. "The result is a diluted bill that's barely a Band-Aid, but definitely a slap in the face for people suffering across the country." "When the history books are written about this pandemic," Goehl added, McConnell and the GOP "will be remembered as heartless souls who played politics with people's lives by blocking life-saving relief for months." The legislation includes $600 direct cash payments to Americans who earned $75,000 or less in 2019, though that hard-fought-for sum is meager compared to what other OECD countries have allocated to workers, including several nations that subsidized wages by 75% to 100% and didn't have gaps of more than 260 days between relief packages. In addition, the bill extends paid sick leave benefits and augments jobless benefits by $300 per week for 11 weeks, averting a catastrophic post-Christmas Day scenario in which 12 million people would lose unemployment insurance. It also provides much-needed funding—$10 billion for childcare, $13 billion for nutrition aid, $25 billion in rental assistance, and $82 billion for schools, as Common Dreams reported Sunday. Progressives defeated the corporate immunity provision McConnell has spent months pushing for, but urgently needed fiscal aid for state and local governments was also cut from the bill. Although specific details of the agreement are still emerging, the package will reportedly leave out hazard pay for frontline workers while the Washington Post reported Sunday that Republicans extracted tax deductions for "three-martini lunch" expenses "in exchange for... tax credits for low-income families." And, according to Matt Bruenig of the People's Policy Project, the legislation excludes 13.5 million adult dependents. The bill is "not nothing, but it's obviously inadequate...during an economic meltdown that has been punctuated by mass starvation and intensifying poverty," the Daily Poster's David Sirota wrote Sunday night. "For comparison, only three years ago, Republicans passed a $1.5 trillion tax cut that enriched the wealthiest 1% of households."

Do not let them tell you we don't have enough money for unemployment, robust survival checks, or guaranteed health care.

We spend it on the military, tax breaks for the rich and three-martini-lunch tax deductions.

AFSCME president Lee Saunders in a statement released Sunday night called the new Covid-19 relief package "a slap in the face to frontline public services workers—including nurses, first responders, sanitation workers, corrections officers, and others—who have risked their lives and livelihoods during this pandemic." While the pandemic-driven economic slowdown has led to sharp declines in tax revenue, states and localities do not share the federal government's ability to run deficits. Citing the devastating impact of the crisis on municipal budgets across the country, Saunders pointed out that "already, 1.3 million frontline public service workers have been thanked for their heroism with pink slips, with more than a million more on the chopping block." "Congress has turned its back on out frontline heroes and the communities they serve," Saunders said, adding that neighborhoods across the country will "pay the price with further job losses and cutbacks in essential services." The legislation could have been even worse, Goehl pointed out, had it not been for the advocacy of progressive elected officials like Sen. Bernie Sanders (I-Vt.), Rep. Pramila Jayapal (D-Wash.), and the Congressional Progressive Caucus as well as "grassroots organizations turning up the heat." "We fought tooth and nail to get people direct cash payments, even though we know a one-time, $600-per-person check isn't nearly enough to survive," Goehl noted. "We also pushed hard to make sure both extended and enhanced unemployment insurance and direct cash assistance were included instead of pitted against each other. By standing up for workers, we kept corporations accountable by rejecting the corporate liability shield." Goehl said that "Congress must pass this bill to address the immediate need, but let's be clear: this should be considered a down payment at best." While the bill extends the CDC eviction moratorium through January 31 and provides $25 billion in emergency rental assistance, "Congress should have done much more to address the housing crisis faced by tens of millions of people," he said. "We need a complete moratorium on evictions, rent and mortgage cancellation, and erasure of pandemic-related housing debts. Rental assistance just means the landlord gets paid with no strings attached, not even a commitment not to evict the tenant next month if they take the money." In addition, the People's Action director emphasized the need for "funding for state and local governments to prevent deep cuts to essential local programs, services, and the workforce." Alluding to the significance of the January 5 runoff contests in Georgia that will determine which party controls the Senate, Goehl said progressives should be "ready to fight for robust relief and economic recovery under President-elect Biden." Sirota cautioned that "if Democrats don't win the Georgia Senate races and gain control of the upper chamber... it will almost certainly become far harder to pass emergency relief bills through Congress." With Biden in the White House, Sirota said, the GOP will have "an even bigger incentive to try to starve the country for their own political gain."
Report typos and corrections to: corrections@rawstory.com.
READ COMMENTS - JOIN THE DISCUSSION