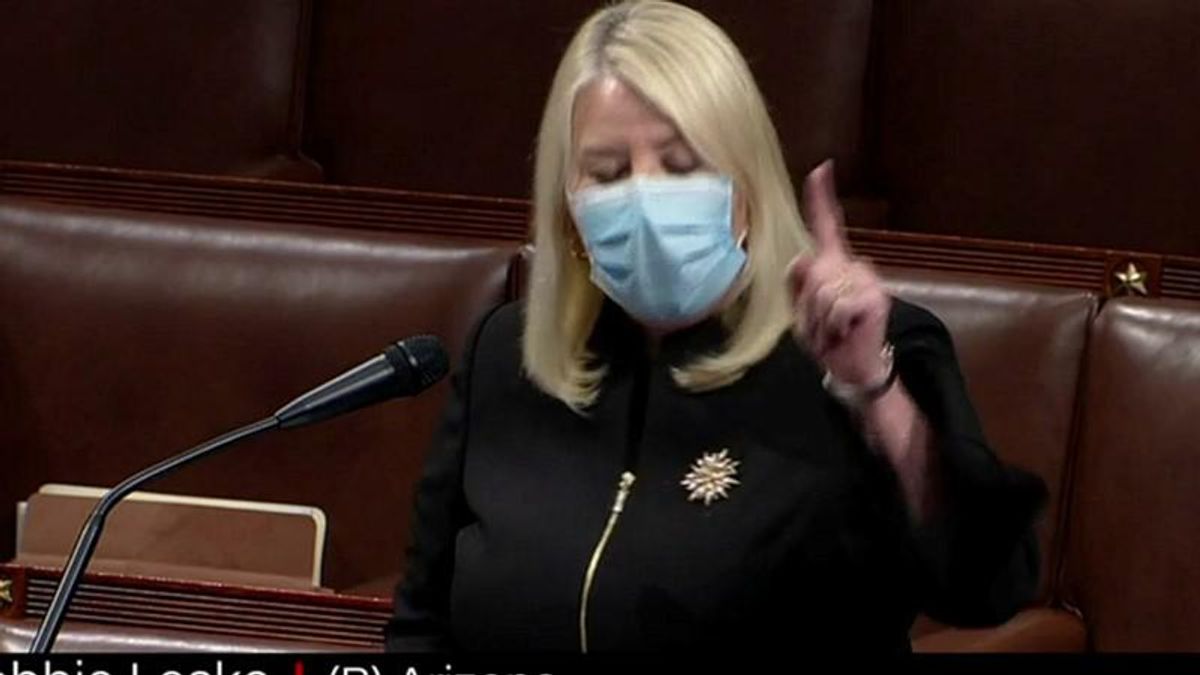 Republican members of Congress are displaying some impressive verbal gymnastic skill in rationalizing how they didn't have the courage to vote against Double-Impeachee Donald Trump today.

In a joint statement explaining why they wouldn't stoop to impeaching Trump in a hurry, Republicans Reps. Dan Crenshaw and Chip Roy, TX, Nancy Mace, SC and John Curtis, UT, prefaced their indignation by eloquently laying out the case for impeaching Trump:

"President Trump publicly pressured Vice President Mike Pence and members of Congress to accept the demonstrably unconstitutional idea that the Vice President has unilateral authority to ignore the sole slate of electors sent to Congress from each of the states and to declare who would be president. He did so leading up to, and during, a massively attended rally which he called for and encouraged. Moreover, the event was deliberately scheduled to take place at the precise moment at which members of Congress were meeting to carry out our Constitutional duty to count those very electoral votes.

"This pressure campaign whipped many of those present into a frenzy that contributed in part to the assault on the Capitol resulting in the deaths of several American citizens, including at least one Capitol Hill police officer. Therefore, we condemn the President for his words and actions which contributed to these events and encourage every member of Congress to similarly condemn."

"While we do not make legal judgment of the President's intent regarding Wednesday's demonstration, his actions were reckless. No President should ever, among other things, promote clearly unconstitutional theories that risk the stability of our nation and, in particular, do so to the detriment of the peaceful transition of power."

Then the four members of Congress proceeded to say why there wasn't enough of a "sober review of the facts" to justify impeachment. That rather belies the litany of impeachable conduct they laid out in their preamble, one that should even be compelling after a "drunk review of the facts."

Should the members really have it both ways? If there wasn't enough evidence to impeach Trump, then where do they get off accusing him of pressuring his vice president and themselves to conduct themselves unconstitutionally? On the basis of what non-evidence would they accuse him of calling for a massive demonstration--timed to coincide with their vote-counting--and then of having "whipped many of those present into a frenzy," an action they claim "resulted in" the violence that ensued?

If these facts needed further study and hearings and the like, then shouldn't they have refrained from making such inflammatory accusations about Trump's conduct? They accused him of all they could ever need and more to impeach a president and then claim not to have enough information to go through with it.

Some profile in courage.

In Missouri, Rep. Ann Wagner (R-MO) similarly concluded there had not been "the appropriate investigations and a complete airing of the facts so our vote can be fully informed."

But in the very same statement, she said:

"That does not mean, however, that President Trump should escape accountability for his role in the violence that took place January 6th. I support censuring the President for his rhetoric to ensure that his behavior is not deemed acceptable to future leaders, or to our adversaries around the globe."

Wagner also concluded that Trump's statements after the Capitol riot, "were antithetical to the leadership our nation desperately needed in a time of crisis."

Presumably, then, Wagner must have been willing to censure the president without the benefit of evidence. Except his on-camera statements, she quoted that we all saw with our lying eyes. You know, the ones based upon which she couldn't be "fully informed."

In still another instance, Rep. Ashley Hinson, R-Iowa, apparently saw enough to conclude "I believe the President bears responsibility, and that is why I urged him personally to call off those who were violently storming the Capitol last week. I wish he had spoken up sooner, but he did not."

But she didn't enough to justify impeachment without "collecting evidence, conducting committee hearings, and having preliminary votes."

After all, it's not like the people for whose actions the president bore "responsibility" are talking about storming the Capitol--and the ones in all 50 states--before next weekend. Well, maybe the Secret Service and FBI think so, but what do they know? Besides, what's the rush?

Who would suggest that Trump was responsible or deserved condemnation or should be held accountable for what happened last week in Washington D.C.? Oh right, these members of Congress, the ones who couldn't bring themselves to impeach Trump today.