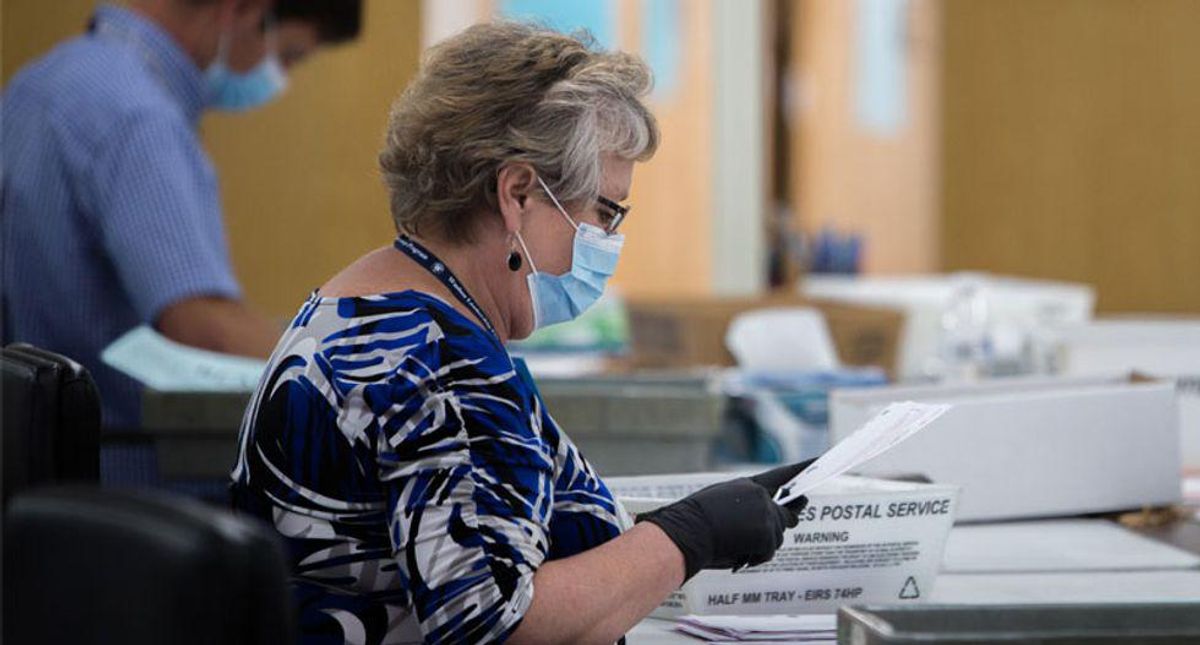 "Specifically, I like this approach in Arizona because it is scientific," he falsely claimed to the press. "I mean, what I saw there, there is no way that they can be accused of slanting or bias because it's just counting votes, looking at ballots, and then doing the forensic analysis."

Alaska state Rep. David Eastman, another Republican eager to conduct an audit in his red state, also appeared in Arizona, but not until after he traveled Jan. 6 to Washington for Donald Trump's "stop the steal" rally. Members of his own party have criticized him for the move.

A whole crew of Wisconsin Republicans flocked to Arizona last week, "including state Rep. Janel Brandtjen. Brandtjen is the chairwoman of the Assembly Elections Committee, which is helping oversee a review of Wisconsin's election," said the report. She was joined by state Reps. Rachael Cabral-Guevara, David Murphy and Chuck Wichgers.

In that case in particular, it was revealed that Christina Bobb and Chanel Rion of the OAN network helped raise money for their trip.

Former Missouri Gov. Eric Greitens was also among the group of Republicans who came to Arizona. He was forced to resign in 2018 after allegedly blackmailing a woman with whom he was having an affair. He's now running for the U.S. Senate.

Georgia Republicans joined as well, with state Sens. Burt Jones and Brandon Beach, who attempted to nulifiy all of the votes in his state with a lawsuit even the GOP attorney general called "constitutionally, legally and factually wrong." State Sen. Marty Harbin also joined them.

The following day, Republican gubernatorial candidate Vernon Jones, who also was at the Jan. 6 events, came to examine the "audit." He switched parties in 2021 to support Donald Trump's failed election. He "aggressively confronted the reporter" when asked about the partisan dollars spent on making the audit happen.

Oklahoma pastor, Jackson Lahmeyer, came to Phoenix on June 11. He's running for U.S. Senate against Republican Sen. James Lankford, who had just begun speaking out against the election certification when the Capitol was attacked.

AZCentral then listed off Tennessee Republican, and Shelby County Election Commissioner Bennie Smith. His county covers all of Memphis east of the river. Utah state Rep. Steve Christiansen and Virginia's Amanda Chase, who just lost her gubernatorial campaign. She's the one who told Trump he should impose martial law.

Those Republican leaders add to many Arizona leaders eager to examine the audit themselves.

While it was reported that OAN hosts were raising money for the Republicans, Bobb in particular has a non-profit organization that fully funded the travel of some Republicans, another report revealed last week.