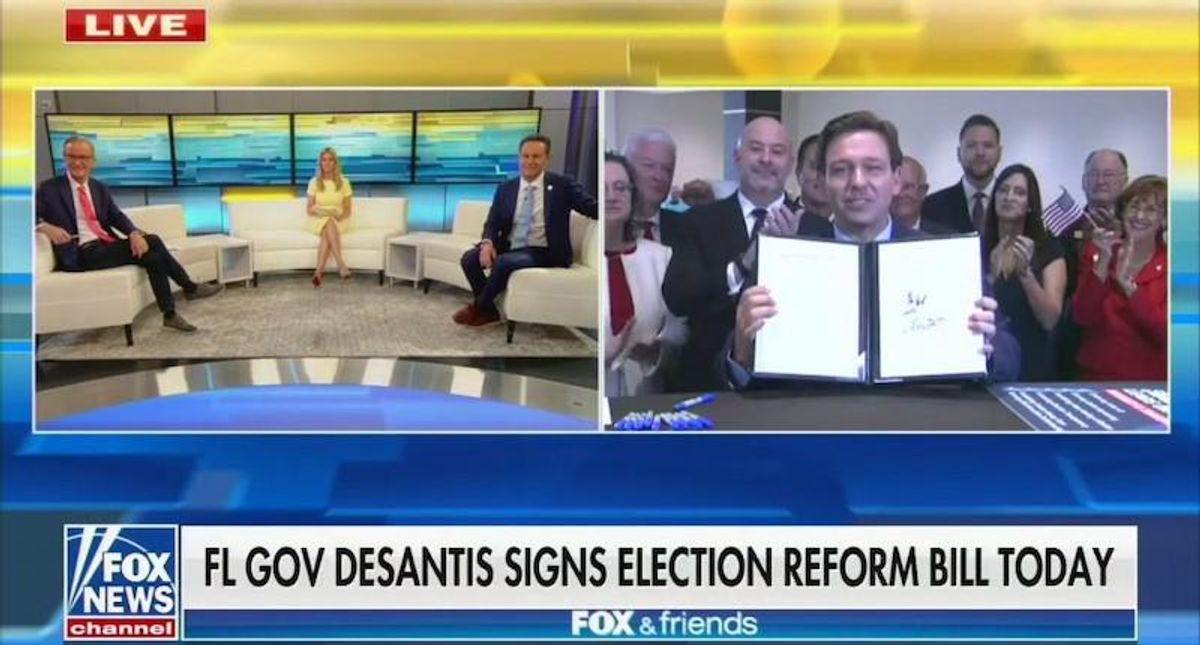 Florida Gov. Ron DeSantis on Thursday barred local media outlets from covering his signing of S.B. 90, the latest state-level voter suppression law which makes voting by mail—which millions of Floridians have done for years—more difficult and discourages voters from waiting in long lines at the polls.

The Republican governor, a close ally of former President Donald Trump, gave Fox News exclusive access to the bill signing, drawing condemnation from rights advocates and at least one local reporter who learned Thursday morning that he would not be able to cover the event.

"We were a pool camera, assigned to feed this event to affiliates nationwide. Now, the only camera will be Fox News," tweeted CBS 12 reporter Jay O'Brien. "It's not just us. Not a single reporter is being let in. This in a 'sunshine' state that prides itself on open government."

Journalist and voting rights expert Ari Berman said DeSantis's decision to bar all media outlets other than Fox, which joined Trump last year in claiming that allowing expanded voting by mail in the 2020 election would lead to rampant fraud, was "extremely telling."

"Democracy [is] literally dying in the dark," Berman added.

Other critics echoed the rebuke.

DeSantis proudly told "Fox & Friends" he believes S.B. 90 contains the nation's "strongest election integrity measures" as he signed the legislation. The law requires votes to reapply for mail-in ballots every two years rather than every four years, as they did under previous guidelines; restricts the use of election drop boxes; and prohibits actions that could assist people waiting to vote—including offering "items" such as water or food.

The new law is modeled on a voter suppression measure passed in Georgia in March. Lawmakers in Iowa, Utah, and Arkansas have also passed similar laws ahead of the 2022 election, and legislators in 47 states have introduced 361 voter suppression bills, according to the Brennan Center for Justice.

As of March 24, legislators have introduced 361 bills with restrictive provisions in 47 states.

By signing the bill, said the civil rights organization All Voting Is Local-Florida, "DeSantis is continuing a disturbing, nationwide trend of turning lies into legislation."

"The truth is during the 2020 election cycle, Floridians refused to choose between their health and the right to vote, casting vote-by-mail ballots in record numbers so they could safely and securely steer the fate of our democracy," said Brad Ashwell, director of the organization. "SB90 weaponizes lies and uses them as a basis to exact a vendetta against Floridians, assaulting our freedom to vote. There is no integrity in restricting access to the ballot box."

Following the signing of S.B. 90, the NAACP Legal Defense and Education Fund filed a federal lawsuit against Florida Secretary of State Laurel M. Lee, on behalf of Common Cause, Disability Rights Florida, and Florida NAACP. The groups denounced DeSantis and the state Republican Party for "using the myth of voter fraud to pass sweeping restrictions on voting."

"SB 90 creates barriers between Floridians and their right to vote. By signing this bill, Gov. DeSantis added Florida to the shameful list of states that are moving backward on voting access, rather than forward," said Sylvia Albert, director of voting and elections for Common Cause. "Every voter in America has the right to have their voice heard, by casting and having their ballot counted—that's how our government 'by the people' is supposed to work."