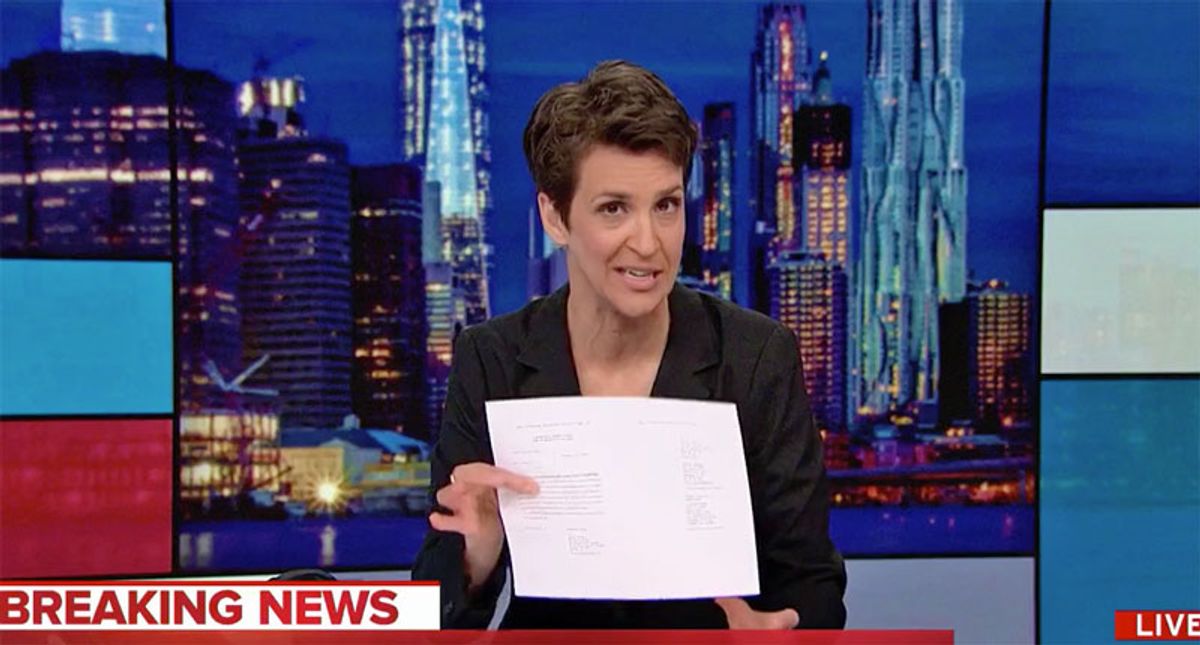 MSNBC host Rachel Maddow started her show off detailing the day of Senate hearings over the attack on the Capitol Jan. 6. While there were a number of important issues, like the harrowing experience of police on that day, Maddow focused on Sen. Ron Johnson (R-WI).

Johnson, Maddow explained, has gone down the rabbit hole of QAnon conspiracy theories and gone so far as to enter them into the Senate record.

"You might think the attack on the Capitol was carried out by supporters of former President Trump," Maddow began. "You might think that because they carried giant flags that said Trump and because they chanted things like 'Fight for Trump!' as they stormed the Capitol, after a rally in which they were incited to do so by President Trump. You might think that white supremacists and other extremist groups were responsible for some of the violence that day because members were arrested and charged in the ensuing weeks since the attack and because all the witnesses at today's hearing, one after another, all uniformly confirmed that white supremacist and extremist groups were among those that attacked the Capitol. But Ron Johnson of Wisconsin."

She explained that Johnson had read a conspiracy theory on a right-wing blog that said that the Jan. 6 attack was actually carried out by anti-Trump protesters masquerading as Trump supporters.

"You see, all the people who committed all the violence that day, they were faking being Trump supporters when they really weren't," Maddow paraphrased. "It was secretly anti-Trump people who dressed up as pro-Trump people. Like an elaborate holiday pageant. Yes. Everything was all very festive, as Sen. Johnson described it, until these anti-Trump provocateurs were there. This is not like a guy heckling. Ron Johnson was the chairman of the Homeland Security Committee. They made him chairman. Homeland Security. 'Have you considered that maybe this whole thing was a clever costumed stunt by President Trump's opponents? Have you considered that? I read a blog about it once on the Tweeter.'"

See her opener mocking Johnson below:

Ron Johnson read a blog on the tweeter he thinks explains everything the DOJ, FBI and DHS don't know www.youtube.com